The BJP MP is targeting Arun Jaitley for his role in the DDCA scam. What can we learn about Azad from his cricketing days? 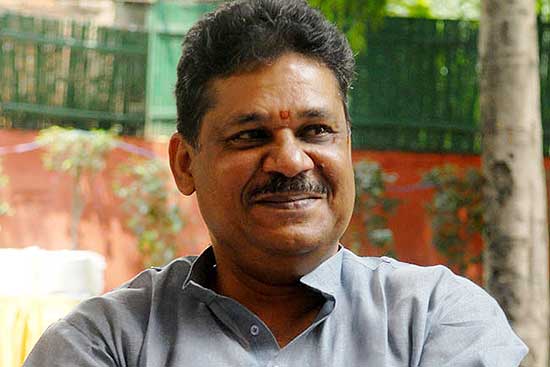 In his heyday as a cricketer, Kirti Azad, who has been eloquently vociferous in his arguments and comments and debates as a politician today, seldom or never managed to make his bat do the talking when he represented India in 7 Tests and 25 ODIs in the early 1980s. He was a classic example of a flop player despite getting enough opportunities irrespective of his modest talent with bat and ball.

Azad's only achievement was that he managed to play for India, somehow or other, regardless of his limited skills. Why, he went on to play in the 1983 World Cup, which India won under Kapil Dev, in England. Many experts, including former cricketers, believed that an average player like Azad did not deserve to play for the country in the first place.

It was alleged, probably rightly, that he made it to the Indian team not because he was talented, but because his father, Bhagwat Jha Azad, a former Union minister and chief minister of Bihar, was an influential politician. The so-called all-rounder's poor record for India lends credence to this widely-held belief.

Eyebrows were raised in cricketing circles when Azad, an attacking right-hand batsman and a fastish offie, was first picked for India's combined tour of Australia and New Zealand, under Sunil Gavaskar, in 1980-81. It was being argued that his place should have gone to a genuine all-rounder like Rajendra Jadeja, who in those years was a kingpin in the Ranji Trophy team of Mumbai.

There were several other better players, like the then Test discard Dhiraj Parsana, who could have been preferred to Azad. How and why Azad made it to the Indian squad for such a crucial tour continues to remain a mystery. Indeed, inscrutable are the ways of Indian selectors, who tend to elevate pygmies to paragons and relegate champs to the level of chumps.

Expectedly, he failed to make any impression on the tour. In his maiden ODI, against Australia in Melbourne, he faced 22 balls before he was consumed by the dangerously quick Len Pascoe for 4. The sole consolation was India won by 66 runs. His Test debut against New Zealand in Wellington was also a low-key affair: 20 and 16 runs in two innings. The Kiwis won by 62 runs.

He was lucky enough to figure in three out of six Tests against England at home in 1981-82. But he failed to make the most of the selectors' magnanimity. He was forgotten for a while after his lacklustre performance against Keith Fletcher's side in spite of the docile pitches in a marathon Test series saved by the willowy wizardry of Gundappa Viswanath from becoming completely boring.

But Azad's was one of the firsts names to be penciled in when the selectors picked the Indian team for the quadrennial showpiece event in England because of his alleged ability to change the complexion of a match in a jiffy with his aggressive batting. Though his bat never set the Thames on fire, Azad's economic bowling — 12-1-28-1 (Ian Botham) — was crucial to India's semifinal win against the hosts.

Ironically, cricket enthusiasts of Azad's generation remember him not for any of his Test or ODI performances, but for his blazing 71 not out in an exhibition day-night match against Pakistan in Delhi in 1983. In a way, it was completely Azad's match. He took all the wickets that fell when Pakistan made 197 for 3 in 50 overs.

It was one of the first day-night matches played in the country and the Indian players were not used to batting under light. They made a mess of what was an easy target. But Azad converted what looked like a certain humiliation into a nail-biting one-wicket win, playing an explosive innings, hitting seven sixes, including three in a row off medium-pacer Jalal-ud-?D?in.

An alumnus of Delhi's famous Modern School, Azad's happy-go-lucky approach as a cricketer often reflects in his off-the-field personality as well. He is reputed to be candid, frank and transparent in whatever he says and does. Just like his batting, he is known to be hard-hitting and brutally outspoken in his public statements as a politician.

He mines no words when it comes to expressing his views. Opponents are said to fear his tendency to call a ?spade a ?bloody shovel. Not only his political rivals, cricket administrators in general, too, have often had to face his fury, especially when he believes they are not playing with a straight bat. And when the mood seizes him, he sometimes attacks his own partymen, if he is convinced they are in the wrong.