The courtship started when Khalid along with his JNU friends went to put forth their view point on 'India's most watched news channel'. 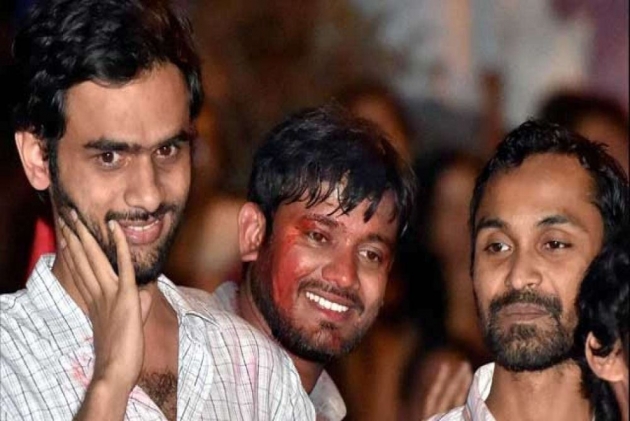 A few days after the attack on the life of Umar Khalid, Dr Sanjay Kumar Yadav, another JNU alumnus who teaches sociology at the Central University in Motihari, Bihar, was brutally beaten up by local men for writing a social media post critical of former PM Atal Behari Vajpayee, who had just passed away. These are not the only two instances when affiliation to JNU has invited attacks from marauding men. There have been many cases in the past where the 'public' had decided to teach the 'anti-national' students a lesson.

A war between the nationalists and university students, especially from JNU, was declared by some leading TV news channels in February 2016, around an event organised on campus against the hanging of a Kashmiri militant, Afzal Guru. It led to the arrest of Umar along with Anirban Bhattacharya and the then JNUSU president, Kanhaiya Kumar, on sedition charges. They were later released on bail by the sessions court, but, for a section of the population, they remain traitors wasting taxpayers’ money.

Two years since that February, the fresh spate of attacks by men, who are openly owning up to the act, suggests that JNU students are in a very dangerous battle of perception against a conglomerate that has formidable control over the thought process of the people. The attacks on Umar and Sanjay are the harvest of the seeds sown in February 2016 by these same conglomerates.

A story of sedition told

February, the month of love, witnessed a lethal infatuation of a section of the media with JNU students—Umar, in particular, was singled out as a leader of the Afzal premi (Afzal lover) gang. The courtship started when Umar and other JNU students went to put forth their viewpoint on ‘India’s most watched news channel’. The fragile nation was once again in danger, this time from university students. The anchor had to play multiple roles to convince his viewers of the gravity of the case—he would sometimes become an embodiment of the nation itself and, at other times, the judge in a courtroom. An hour-long hearing was all it took for the anchor-nation-judge to pronounce Umar guilty of the most heinous crime in our times—being ‘anti-national’. It’s almost like the nation was in search of a traitor, and the anchor could hammer home his point that here he was, and that the matter demands the nation’s immediate and serious attention.

While Umar was in hiding, fearing the lynch mobs, some news channels were assiduously inquiring about his “hideouts” and friends. The police and government officials also pitched in, after he was deemed a threat to national security. The home minister, worried about the nation’s safety, claimed that the JNU protest had the backing of Lashkar-e-Toiba chief Hafiz Saeed. It was found out later that there had been some confusion as the minister had inputs from different agencies. Even the then Delhi Police chief apparently fell into the trap of such tweets, and decided to forewarn the students about Hafiz Saeed’s involvement. Since then, it has become difficult to distinguish between trolls, news anchors and government officials. Truth and facts were often casualties of such tweets and statements.

After Umar and his friends were released, the media was looking for other avenues to save the nation. However, they were aware of the threat from university students still looming large on the horizon. Their patience paid off. They were again bestowed with the noble opportunity to rescue the nation when Umar was invited to speak at public programmes. When the nation had exhausted its questions, it decided to transform into Republic to alert the nation of the perils of public discussion. In 2017, Umar was invited by the Ramjas College’s literary society to speak on ‘The War in Adivasi Areas’, a theme related to his PhD topic. The invitation had to be withdrawn due to ABVP's hooliganism, but the news channels used this as an opportunity to remind the audience once again of the February 2016 event.

Similar arguments were pitched by these channels when Umar went to Pune in January 2018 to extend solidarity to Dalits, who were commemorating the defeat of Peshwa rule by the British East India Company, with the help of Mahars fighting for the British. The resistance movement was portrayed as #MahaCasteClashes and Umar along with Jignesh Mewani were accused of inciting the masses. The organisers were interrogated as to why the anti-national Umar was called for the programme. Even though his ‘guilt’ was not established, he was already pronounced guilty and his involvement in people’s movement was criminalised.

This madness had a method to it. The larger attack was on JNU and other universities that were apparently turning into JNUs—all the spaces and sections who spoke against the ruling dispensation had to be branded seditious and anti-national. Scores of students from TISS, HCU, BHU and JNU were slapped with fines and named in FIRs. Umar was made the anti-hero of the dissenting section. The witch-hunt and smear campaign went on for more than a year to make an example out of him—a warning to all 'liberals' that they could be next.

Umar’s politics and identity are perceived as a threat to this government. He is not the kind of citizen, Muslim or student this current dispensation could be comfortable with. Unapologetic about his Muslim identity, he has been a left activist who had started engaging with political issues during the Batla house encounter in 2008. When he joined JNU as a postgraduate student at the Centre for Historical Studies, he started associating himself with left politics on campus. Since then, he has been a part of various protest gatherings and meetings within and outside campus. He has been vocal against the atrocities of the State on adivasis through Operation Green Hunt, the shrinking democratic space within the campus imposed by Lyngdoh Committee recommendations that restrict activism on campus, strengthening the Gender and Sexual Harassment Committee (GSCASH), unionising workers, democratisation of university spaces and a range of other issues—all related to working towards the promise for a better tomorrow.

This is the kind of Muslim that scares the BJP government because it breaks down their narrative of the fundamentalist and fanatical Muslim—the category they are most comfortable with. The BJP can only tolerate three kinds of Muslims. The first are the likes of their own party members like Mukhtar Abbas Naqvi and Syed Shahnawaz Hussain, or the Muslim wing of the RSS—Muslims who are comfortable with second-class citizenship, believe the Ram Mandir should be constructed at the site of the demolished Babri Masjid and subscribe to the Hindutva narrative that they should give up their rights of citizenship solely due to their identity. The second category is the most crucial—the ‘backward Muslim’, whose religiosity is blamed for the backwardness, the kind who scream and howl and even resort to violence on questions of religion, especially those related to women’s freedom. The image of a skullcap and beard sporting Muslim is no doubt a favourite of some new channels. The third is the indifferent and docile Muslim, who remains quiet as long as s/he is not attacked.

Umar does not belong to any of these categories. He has refused to be cowed down by the propaganda around his identity and chooses instead to raise his voice against atrocities on Muslims, while not restricting himself to that. As a left activist, he has believed in speaking out against atrocities on Dalits, adivais, women, workers and the transgender as well. These kinds of solidarities threaten any regime thriving on pitting one against the other, especially the Hindu against the Muslim, by blurring class and caste identities.

A day before Sanjay was attacked in Motihari, he had written against the assassination attempt on Umar in Delhi. Umar too had extended unflinching solidarity to Sanjay. These attacks were not on Umar and Sanjay per se, but on their politics—as students and teachers who believe in democratising university spaces, as people who do not believe in limiting themselves to their surname, as citizens who believe in reclaiming their rights beyond voting, as activists who believe in fighting against all kinds of inequality. Theirs are small voices of history, but it would take more than threats and bullets to silence them.

(The writer is a doctoral candidate at the Centre for Historical Studies, JNU. The views expressed are personal.)