What The ‘Eye’ Sees

In order to enhance our ‘viewing pleasure’, the Agra Development Authority proposes to erect a giant Ferris wheel, emulating the ‘London Eye’. In addition, two ropeways will be suspended across the Yamuna, and cable cars will surround the Taj 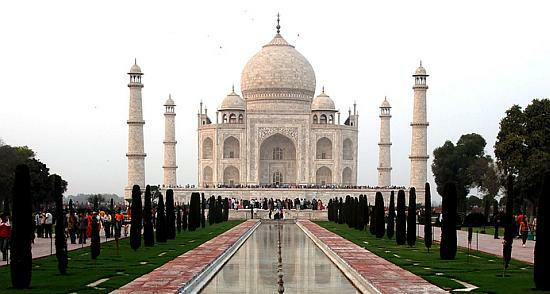 The historian Sir Kenneth Clark once remarked, “Nothing except love is so universally appealing as a view”. It is this union of undying love and incomparable architectural beauty that makes the Taj Mahal one of the Seven Wonders of the World. This is the magic that millions from across the world flock to experience in Agra.

And now the Agra Development Authority (ADA) has laid out its ‘vision’ for the Taj and Agra city. In order to enhance our ‘viewing pleasure’, it proposes to erect a giant Ferris wheel, emulating the ‘London Eye’. In addition, two ropeways will be suspended across the Yamuna, and cable cars will surround the Taj. Thus, as the eye will travel from that ethereal vision in marble to packs of people struggling across ropeways, as cables cars slide up and down and, as the ‘Eye’ descends on the Taj, with its hordes suspended in glass capsules, it will assume its final embodiment – that of a freakish curiosity, an infantile fancy set in an amusement park. All this would be done, the ADA assures us, in order to improve ‘visitor experience’.

What is more disturbing than this blighted vision is the complete denial of, and the unwillingness to focus on, what actually and urgently needs to be done. As you drive into Agra past ungainly concrete boxes, there, on a discrete bank of a desolate river, shimmering out of the muck and mire, its vast dome tainted a slightly grimy brown, is the Taj Mahal. Descending on ground zero, the visitor appreciates the Supreme Court order banning all vehicles within 500 metres of the Taj, and proceeds to walk down what appears to be a broad leafy avenue, quite unprepared for what lies ahead. And then it begins.

Suddenly all manner of people accost you, pester you. ‘Guides’, urchins, beggars, hawkers – it’s a free for all. As you shake them off in exasperation and walk on, your nostrils are assailed by the foulest gut-wrenching stink ever possible. The cause of this olfactory offence is two large open drains, lining both sides of the road, filled with black pungent slime that slowly courses along like a gentle stream. You try to run past thinking you will escape its foul embrace but its pursuit is relentless. Soon, the odours of rotting effluvia mix in with the sharp pungency of horse urine. As tongas trot past, the horses disgorge their intestinal contents all over the promenade. This mixes in with vast runnels of camel urine that meander down the road as people are heaved toward the Taj atop the hapless beast – their visit enhanced by the ‘camel experience’. Desperate for some way to make a getaway you try to hail an Agra Tourism ‘battery bus’, crammed with people, sweat pouring down, the sides of the white bus a grimy black. What is supposed to be the start to an unforgettable experience has already turned unpleasant and left you rattled and furious. This, then – the filth, the excrement, the unforgivable stink, the chaos – is the introduction to India’s premier tourist destination.

“What a city! A perfumed garden, newly in flower – its buildings have grown tall like cypress trees,” says Abu Talib Kalim, in a poem in praise of Akbarabad (Agra), from his Diwan written in the 1630s. Ebba Koch, historian and passionate scholar of Mughal architecture, in her meticulously researched book The Complete Taj Mahal, brings alive a picture of Agra in its glory: “The Taj Mahal complex seems unique today, but when it was created, it was integrated into the scheme of Mughal Agra as one of its constituent elements. The prevailing garden type of city, the riverfront garden, was enlarged on an unparalleled scale and arranged in a perfectly symmetrical composition. The typical was used to create the outstanding.”

Agra had long been enriched by the flowering of empires, first under the Lodhis and later the Mughals, to reach its zenith during the rule of the Emperor Akbar. Mughal architecture found its greatest expression under him. By the time Shah Jahan came to the throne in 1628, Agra was, as Abdul Aziz put it , “A wonder of the  age – as much a centre of the arteries of trade both by land and water as a meeting place of saints, sages and scholars from all Asia… A veritable lodestar for artistic workmanship, literary talent and spiritual worth.”

It was not just the Lodhis and Mughals who left their architectural imprint on Agra. As it succumbed to the vicissitudes of the rise and fall of empires, it found brief favour with the British, who left the city with an impressive colonial architectural legacy.

Standing in the midst of the concrete confusion that is Agra today, it is difficult to recreate a picture of the great city of the past. With a bit a patient plodding, however, the city manages to throw up many surprises. There are still a large number of beautiful buildings that shine through the pervasive shabbiness – the smatterings of an architectural heritage that illuminate Agra’s chequered history from the time of the Lodhis, through the Mughals, the Marathas the Jats and finally the British. As one comes across these buildings there is a growing realisation that, despite its chaos, parts of the old city are within reach of redemption. There is a spatial contiguity that is still vaguely present in the remains of Mughal Agra, with its riverfront havelis, the Agra Fort, the surviving great monuments and the Taj. The same is true of numerous colonial buildings and the cantonment area. The destruction wrought in the post-independence era is not as complete as in the case of, say, Delhi, where its monuments and ruins stand in complete isolation from their surroundings.

With exceptional effort and dedication, Agra could be revived as a city of beauty, its priceless built legacy restored. But can the city’s administration -- the municipal corporation, the urban development and the heritage development wings -- come together and work to a plan? A plan that could recover the Yamuna from the stinking sewer that it has become? Work at restoring the riverfront through a painstaking study of paintings and writings, to create again the lost gardens along the banks? Through gradual restoration, the riverfront havelis and structures surrounding the Fort could be recovered. Within the city, heritage status could be conferred on the numerous stunning colonial buildings that house schools, colleges and other institutions, and be brought into the ambit of protection.

Beyond its built heritage, Agra is famous for its marble inlay and carving. Yet the plight of craftsmen is pitiable today, the art itself has been severely corrupted, and artisans are increasingly abandoning their craft in search of better paying alternatives. Some of the presently degraded heritage buildings could be turned into ateliers, were artisans could practice and perfect their craft under government patronage. Such institutions could also attract students and apprentices from India and abroad, to learn from master craftsmen. Old and unclaimed structures could be restored and leased out to museums, restaurants, bookshops, art and craft shops, all bound to abide by strict heritage laws. Agra could learn from Florence, a city of the great age of the renaissance. Florence is, today, a vital and thriving centre of heritage, art and culture, and a premier tourist destination. It offers a dramatic example of a harmonious transition to the modern age.

Agra is India’s foremost tourist attraction. In 2007-08 it witnessed an inflow of 2.7 million foreign tourists. USD 2.3 million was raised from the Taj alone. The ADA’s harebrained scheme is justified as an effort to bring in more bucks to the city exchequer through tourism. It is, however, tawdry and extortionist in its orientation. Charging foreigners huge amounts of money as entrance fees is not a very winning idea. The London eye? Well, it's there in London, in Singapore, as well as in every two hick town hosting a carnival.

People come to India to see this great country with its amazing history and its stunning art and architecture – so startlingly different from anything they ever encounter elsewhere. Just the Taj generates extraordinary earnings. If the city could be rid of its crust of filth, and the inertia of its civic authorities, if its planners could imaginatively connect the past to the present, and if the life of the city could be imbued with the essence of the spirit that once prevailed during the times of the great Emperor Akbar, it would hit pay dirt. A revitalized and restored city would effortlessly attract tourists. Piecemeal, imitative and unimaginative alternatives can only serve to further destroy the city’s priceless heritage.