Clearly, good governance -- or the ability of a political party to "connect" with the electorate's hopes, needs and desires -- can be an electoral winner. Politics of terror, on the other hand, may not resonate with the voters... In Delhi, development may have meant the vision of a modern megalopolis, in Chattisgarh, the populist promise of rice at Rs 1 a kg, and in Madhya Pradesh, better roads. But it worked for the incumbent chief ministers of these three states -- the Congress’s Sheila Dikshit, and the BJP’s Raman Singh and Shivraj Singh Chauhan -- who have all emerged as convincing victors. On the other hand, the BJP’s Vasundhara Raje failed to deliver in Rajasthan, as did the Mizo National Front in Mizoram: in these two states, corruption and the inability to deliver ensured defeat for the sitting chief ministers.

Clearly, the principal message that has emerged from this round of assembly elections is that good governance -- or the ability of a political party to "connect" with the electorate’s hopes, needs and desires -- can be an electoral winner. But equally, it needs to be underscored that the BJP’s attempt to use the terror card -- especially the recent terrorist violence in Mumbai -- especially in Delhi , did not resonate with the voters. And this despite the wall-to-wall coverage of the tragic events in the media, with the Congress facing the brunt of the criticism.

All this, however, cannot obscure one fact -- that the Bahujan Samaj Party is slowly but surely growing outside Uttar Pradesh, having made its presence felt in all but one -- Mizoram -- of the states that went to the polls. In Delhi , for instance, its poll percentage share has risen from 5.8 to 12.2 per cent. As one has seen in U.P., this is the way the BSP grows, incrementally, till it reaches a critical mass which can actually then begin to deliver seats.

So what do these elections mean for the two principal parties, the Congress and the BJP, given that the general elections are just five months away in April-May 2009? For the Congress, reeling under the impact of a global economic meltdown and a series of terror attacks around the country culminating in 26/11, winning three states out of five should come as a big shot in the arm. Not because it presages victory in 2009, but because it should help galvanise the despondent workers of a party facing a serious crisis of confidence, while conveying to its electoral allies outside these states -- whether the RJD and LJP in Bihar , the NCP in Maharashtra or the DMK in Tamil Nadu -- that it is still in the game. 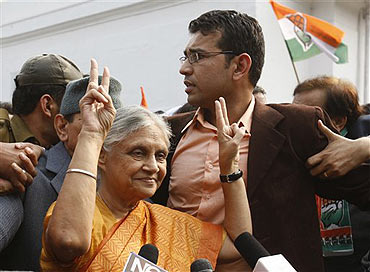 At the level of individual results, the most remarkable result is clearly the one in Delhi , where Sheila Dikshit has delivered the state for a record third time. Dikshit was careful not to take the credit when asked about her success, but the fact is she defied not just the pollsters and the opposition, but her many critics within the party to do the impossible: she led the Congress to a clear win and as the results came in it became clear that but for the BSP, it would have been a landslide victory. In the Congress, the emergence of leaders outside the Gandhi clan is always a cause for concern for the crabs in the party: indeed, Dikshit appeared only too aware of how double edged her victory could be as she parried questions on whether she saw herself as a possible future Prime Minister. 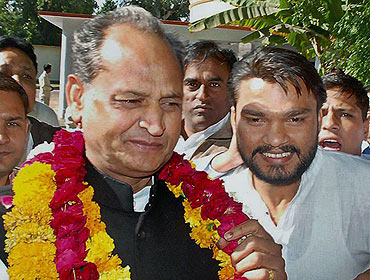 Ashok Gehlot, another Congress leader who is seldom in the limelight, led the party to victory in Rajasthan in a quiet campaign against the flamboyant Vasundhara Raje, whose face beamed down from hoardings across the state. The question now is: will the Congress give the credit to Gehlot, someone who is grudgingly acknowledged not just as a good organizer but who set very high standards of good governance as chief minister between 1998 and 2003? The Congress’s third victory comes in Mizoram where it will return to power after two terms of MNF rule. 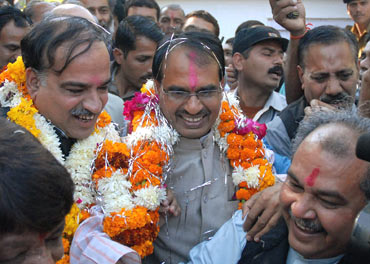 If the results have been unexpectedly good for the Congress -- given the party’s low expectations -- they have been disappointing for the BJP, even though it has seen the birth of two low-key leaders, Shivraj Singh Chauhan and Raman Singh, who retained MP and Chaittisgarh for the party. Chauhan, on his part, has finally emerged from the shadow of Babulal Gaur and Uma Bharati -- once his mentor -- and come into his own. Approachable and modest, the fact that he crisscrossed the state has earned him the epithet of "panv panv bhai". If his message of development helped him retain MP, he was helped in equal measure by the in-fighting in the Congress. If the BJP stood rock solid behind Chauhan, the Congress seemed to have more leaders than followers -- there were central ministers Kamal Nath and Jyotioraditya Scindia, party general secretary Digvijay Singh, state chief Suresh Pachauri and Arjun Singh’s son, Ajay Singh -- all working at cross purposes.

Chattisgarh’s is an equally interesting story. Here Raman Singh’s quiet style and promise of cheap rice, which earned him the sobriquet of Chawal Wale Baba, appears to have helped him retain the state for the BJP. But the real story could well lie in the Naxal-affected Bastar region. Here, the BJP did remarkably well by fielding several Salwa Judum leaders -- so is this a victory for the Salwa Judum? Apparently not, as the Congress Legislature Party leader Mahendra Karma -- and the face of the Salwa Judum -- has lost his seat, Dantewada. Reports coming in suggest that the low polling here ensured that only those backing the state sponsored Salwa Judum came out to vote -- and as the Congress’s face in the state, Ajit Jogi, was opposed to the Salwa Judum, the benefit went to the BJP.

Now that this round of elections is over, what do they hold out for the general elections? For the Congress, which is likely to introspect as much on its victories as losses (so stunned is it by its success!), the challenge will be to take some of the lessons of this round forward -- the need for unity in its ranks and to delegate work to its more capable leaders. For the BJP, which was hoping to make internal security -- or terror, if you like -- one of its key campaign planks in 2009, it will need some time to give the issue a fresh spin.