Mercedes Benz supplies the engine, McLaren the gearbox. The drivers are European. Of the 28 key team personnel listed on their website, only one is from India – Mallya. 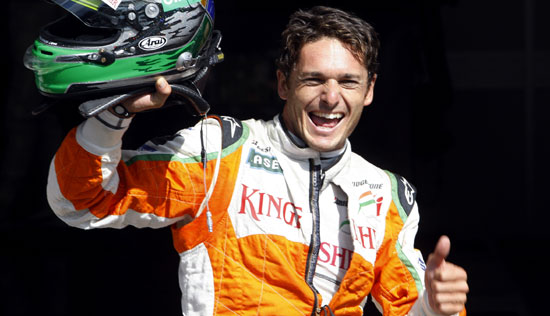 Some Indian followers of Formula 1 view Giancarlo Fisichella’s move to Ferrari from Force India as an act of betrayal – and there indeed may be something in this argument. After all, wasn’t Force India the team that kept his driving career alive by giving him a seat in their car after his time with Renault was up?

And he opted to move at the first chance, after a strong finish at the Belgian Grand Prix, where he won the team’s first ever championship points. It does reveal an opportunistic streak in the Italian, never a much admired quality.

Indians may, also, sense betrayal in the transfer because the driving suit Fisichella wore, and the Force India car he drove, bear the colours of the Indian flag – saffron, white and green.

But this argument ignores the strong personal and financial imperatives individuals and teams operate under. First, being opportunistic may not be admired universally, but that’s how the road to success is invariably paved, especially in the world of sport.

Two, Indians may be in error in getting patriotic about Force India, despite the colours involved, but we’ll come to that later.

Though it’s essentially the machine that determines success in F1 – note the swing in the fortunes of a driver season to season as his car, or rivals', improves, stagnates or degenerates – age is always a factor in sport. Fisichella is an Italian who turns 37 next year; undoubtedly, the end to his driving career is nigh. What else might he want more than ending it with Ferrari?

But what about Force India? “This agreement has been made in good faith and for the good of Giancarlo and the sport in general,” Vijay Mallya, chairman and team principal, said. “A competitive Italian driver in a Ferrari for Monza is a positive story for Formula One, which can only help raise the sport’s profile in these difficult times.”

It’s a positive story all right, so it might be a bit sordid to point out here that Force India switched their engines from Ferrari to Mercedes Benz at the end of the last season and, reportedly, owe Ferrari money. Also, while it’s commendable to do good to the “sport in general”, wouldn’t it have been more useful for Force India to retain the man who took the pole and finished second at the last race?

Now, this business of patriotism. Those who are getting worked up - due to nationalistic reasons – at Giancarlo’s “betrayal” would do well to find more about Force India. Apart from the money, there’s little that’s Indian in the team. Of the 28 key team personnel listed on their website, only one is from India – Mallya. Mercedes Benz supplies the engine, McLaren the gearbox. The drivers are European.Force India is the only team on the Formula One circuit that uses a country’s name. That’s not reason enough to rail against Fisichella for not rejecting his last chance to live a dream.