Wheat May Be Grown Indoors, But The Cost…

Potential yield in vertical farming could be up to 600 times greater per hectare than current farming methods: Study 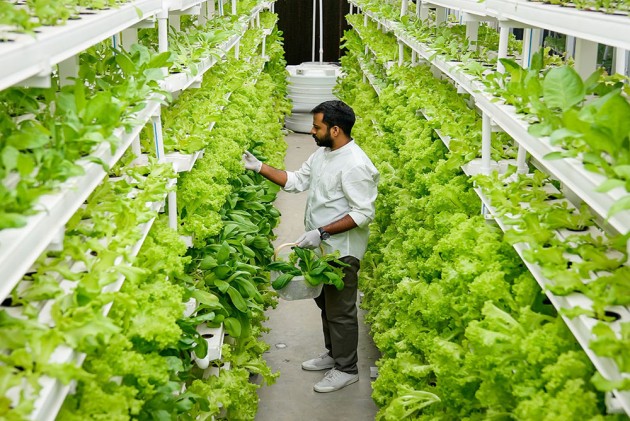 Indoor vertical farming, though new and currently more expensive than the traditional form, has caught the fancy of many growers. This practice involves growing crops in vertically stacked layers. The advantage is that plants can be grown in a controlled environment and without chemicals. The process optimises plant growth, with soilless farming techniques. Water requirement is less since it can be reused.

The practise is said to have been first proposed in 1999. Today, the concept has reportedly grown into an estimated USD2bn-industry and is predicted to expand more than six-fold by 2026.

However, indoor vertical farming is being used to grow mostly fruits and vegetables. That too, certain varieties. In a world where some nations are facing acute hunger and malnutrition, can this be an alternative for producing other important global commodities, such as wheat?

Wheat is the main source of plant protein. It is said to account for 20% of calories in average human diet. Also, wheat is the second most-produced crop globally, but several factors influence yield variability, including soil quality, and weather.

According to reports, although this is just for a 10-layer farm, the study predicts that in a 100-layer farm a huge 19,400 t/ha/y can also be grown.

The researchers found that yields for wheat grown in “indoor vertical farms under optimized growing conditions would be several hundred times higher than yields in the field due to higher yields, several harvests per year, and vertically stacked layers. Wheat grown indoors would use less land than field-grown wheat, be independent of climate, reuse most water, exclude pests and diseases, and have no nutrient losses to the environment”.

However, they also added that “given the high energy costs for artificial lighting and capital costs, it is unlikely to be economically competitive with current market prices”.

The study noted, “Although it is unlikely that indoor wheat farming will be economically competitive with current market prices in the near future, it could play an essential role in hedging against future climate or other unexpected disruptions to the food system. Nevertheless, maximum production potential remains to be confirmed experimentally, and further technological innovations are needed to reduce capital and energy costs in such facilities.”

However, when some reports say that in a world where one out of nine people go hungry, vertical farming may hold the answer to future food security.

“Such yields would be 220 to 600 times the current world average annual wheat yield of 3.2 t/ha. Independent of climate, season, and region, indoor wheat farming could be environmentally superior, as less land area is needed along with reuse of most water, minimal use of pesticides and herbicides, and no nutrient losses.” According to the findings.