A study of Modi's reception at London’s Wembley Stadium shows how shrewdly the BJP hides its political agenda with a non-political mask. 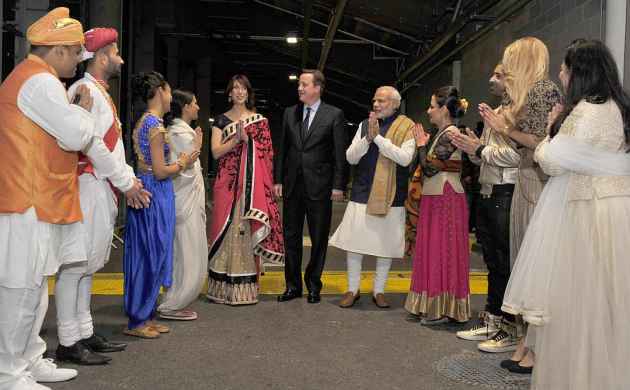 On November 13 at London’s storied Wembley Stadium, globalization met traditional politics from another continent. Indian Prime Minister Narendra Modi, making a state visit to the UK, received a warm public reception and song-and-dance extravaganza. The gathering of some 60,000 British Indians selected through community organizations had a serious purpose – build a database of overseas Indians to help reelect Modi’s Bharatiya Janata Party, or BJP, in 2019. The party’s 2014 landslide win was supported by many non-resident Indians. Building on that success, BJP’s central office has focused on bolstering its Overseas Friends of BJP arm to induct the diaspora into reinforcing its machine with internet skills and generous donations to the party through meticulous planning and implementation presented as spontaneous exuberance of overseas Indians for Modi.

Repeating the 2014 success seems to be the overarching aim of elaborate planning behind meticulously orchestrated welcomes accorded Modi during his trips to the United States, Canada, Australia, the United Arab Emirates and Britain over the past 14 months. The activities do not violate Indian law.

The Overseas Friends of BJP will continue to orchestrate the key part in this scheme  The vast majority of OFBJP ranks are members of the Hindu Swayamsevak Sangh, the foreign arm of the Hindu chauvinist Rashtriya Swayamsevak Sangh, RSS or National Volunteer Association. According to Indian-American businessman Chandrakant Patel, head of the OFBJP (US), nearly 5,000 non-resident Indians flew home before the 2014 election to campaign for the party, Some 3,500 left Britain for the same reason, most of BJP backers with a minority supporting non-BJP groups.

In 2014 BJP targeted 155 urban constituencies out of 543, labeled “digital seats” because of ease of access to voters unlike rural constituencies with minimal internet connections, and the party secured assistance of OFBJP members. Party headquarters supplied voter lists. In the United States, the 4,000-strong OFBJP corps recruited volunteers who traveled to India to campaign. “The others will make/send at least 200 calls and SMSs every day from the US,” said Patel. Such calls helped reduce abstention rates among middle or upper-middle class friends or relatives who might consider politics a dirty business and not bother to vote.

By staging enthusiastic rallies featuring Modi in Madison Square Garden and Wembley Stadium, these numbers are set to rise in 2019.

The origin of this procedure can be traced to the BJP’s second successive defeat in the 2009 general election. The following year, BJP leaders installed an IT cell at the party’s headquarters in Delhi. Known as the National Digital Operations Cell, or N-Doc, the party established a database of nearly one million people who had over the years contacted the party across various platforms. With N-Doc focusing on the digital urban constituencies, a majority of the potential foot soldiers turned into election campaigners.

After a landslide victory in the 2014 poll – despite winning only 31 percent of the popular vote, thanks to vagaries of the first-past-the-pole electoral system – BJP leaders decided to enlarge the OFBJP. This task was to be coordinated with foreign trips that Prime Minister Narendra Modi intended to make.

An elaborate procedure was worked out for the public reception for Modi at Madison Square Garden in New York on 28 September 2014 – drawing an audience of 19,000 Indian-Americans who cheered for Modi.

To gain an entry pass, applicants had to email their postal address, passport and driving license details, and names of the Indian voluntary organization to which they belonged. Event organizers obtained names of such associations independently and compared those with lists maintained by the Indian Embassy.

The Madison Square Garden procedure, using Indian community organizations that registered with the event organizing committee, was finessed by Vijay Chauthaiwale, who later now heads the BJP foreign-policy cell in Delhi. He allotted quotas, based on size of registered organizations, which had not been done before.

“I have traveled for the preparations of the Diaspora events,” he told the Delhi-based Business Standard on 25 August. “The first thing I tell everyone is not about the BJP or the OFBJP event, but about the entire community.” Modi handpicked Chauthaiwale, a lifelong member of RSS. With a doctorate in microbiology, he had served as a vice-president for a pharmaceutical company.

A study of the reception at London’s Wembley Stadium on 13 November shows how shrewdly the BJP hides its political agenda with a non-political mask.  Soon after taking up his job in November 2014, Chauthaiwale, traveled to London for meetings with officials of the foreign arm of RSS (UK).

In spring of 2015, there was preliminary planning for Modi’s London trip after the newly elected Conservative majority government led by David Cameron was sworn in. In late June, four Indian businessmen set up the Europe India Forum, EIF, as a private limited company without shareholders. Nath Puri, one of the directors, acted as the official spokesman for what was routinely described as a not-for-profit company. Press releases were dispatched describing EIF as the organizer of Modi’s reception in November.

On 15 September, its website, published a list of more than 400 community organizations, all said to have signed up to welcome Modi at Wembley Stadium. Each was given a quota and a code, to be shared with members for registering on the website. The prime mover was Chauthaiwale. In his interview with the Indian Express, published two days earlier, he explained that his effort was to set up a nonprofit specific to the event and install an organizing committee. “Once this structure is in place, I back off,” he continued. “But I am still in touch… I help in coordination with the PMO [Prime Minister’s Office]. The [Indian] embassy is there, but we facilitate.”

Sure enough, at the UK Welcomes Modi Community Partner reception on 4 October, Chauthaiwale attended along with leading members of the organizing committee – Puri and Shashikant Patel, the national treasurer of the OFBJP (UK) – along with the Indian High Commissioner Ranjan Mathai.

Once the organizing committee accepted an applicant’s online registration, he or she was given a reference number which they had to bring along with passport or driving license for entry – for attendees, this seemed a routine security precaution.

Many who filled two-thirds of 90,000-seat Wembley Stadium, may not realize that their names and email addresses are part of a database at BJP’s headquarters in Delhi. Come the next election, they will most likely be urged to act as campaign volunteers or make donations.

After a glitzy show of song and dance, Cameron introduced Modi to the audience. Modi hugged the British prime minister before delivering his speech in Hindi. Given to praising the place where he speaks, Modi pointed out that it was “the soil of London” that had given birth to India’s “freedom struggle” – in so far as such top leaders of the Indian independence movement as Mahatma Mohandas Gandhi and Jawaharlal Nehru had spent time there. Despite this tribute to London, with the exception of a few newspapers, Modi’s gesture was ignored or mentioned only briefly by Britain’s press.

The news report that the Indian and British companies had inked agreed £9 billion, or $13.6 billion, in deals for the retail, logistics, energy, finance, IT, education and health sectors was also grist to the mill.

All in all, exploiting the digital revolution to the fullest, the BJP is set to create an international support network the like of which has not been seen before, much to the alarm of the opposition, the secular Congress Party.

Dilip Hiro is the author of 36 books, the latest being The Age of Aspiration:Power, Wealth and Conflict in Globalizing India, published by The New Press, New York and London.