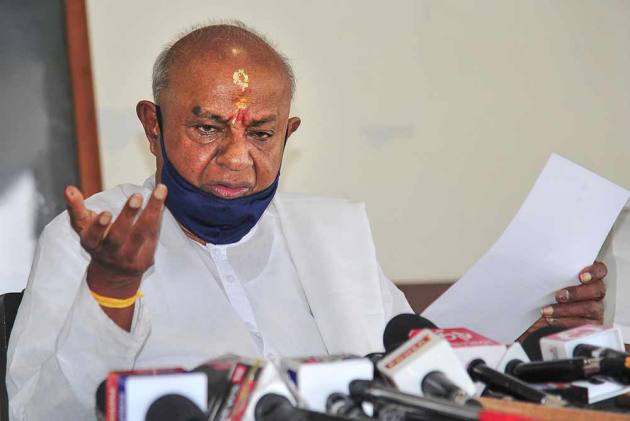 Former prime minister H D Deve Gowda often championed farmers' causes and as a tribute to his commitment and initiatives towards the community, peasants of Punjab named one of the finest varieties of paddy after him, says a biography on him.

Gowda is known to have never violated the decorum of the House as a legislator and parliamentarian. But only once in his long career did he violate this self-imposed principle, and it was when the welfare of his loyal constituency of farmers was 'threatened', writes journalist Sugata Srinivasaraju in his book "Furrows in a Field: The Unexplored Life of H D Deve Gowda".

Referring to incidents of July 31 and August 1, 1991 in Lok Sabha, the book recalls how during a heated discussion on Manmohan Singh's first budget, Gowda had rushed to the well of the house to pressure the government to rollback its decision to end subsidies for the farm sector for over a three-year period. "I am a farmer and a tiller's son and I will not allow this. I will sit on a dharna. I will not go out from this house. It is not for publicity's sake that I am doing it," he had said.

In 2002, when farmer suicides were being reported in big numbers from all across India, Gowda took a delegation of nearly 2,000 farmers from Karnataka by train to Delhi and got them an audience with the then prime minister Atal Bihari Vajpayee. "It was unprecedented, especially for a former prime minister to protest in this manner. People in Delhi were bewildered," the book published by Penguin Random House India says.

"As a tribute to Gowda's lifelong commitment to the farmers' cause, and for his policy initiatives towards the peasant community, and the stellar pro-farmer budget of 1996-97, the farmers of Punjab named one of the finest varieties of paddy as 'Dev Gowda' (sic) after he stepped down as prime minister," Srinivasaraju writes in the book.

"It is said the paddy variety was very popular for over two decades. Farmers who could not converse with Gowda in Punjabi, Hindi, Kannada or English had understood and acknowledged the man's intent. Ironically, this tribute too remained little known, and unsung like all other things associated with Gowda," he writes.

"A usually well-informed Gowda was himself not aware of this paddy variety until Karnataka cadre IAS officer from Punjab, Chiranjiv Singh, wrote about it in his Kannada newspaper column in 2014," he adds. The association with paddy, the association with the soil, the association with a staple diet of a people was the most magical and original metaphors that could have been thought of for Deve Gowda, the author says.

The book also says how in 1996, Mahendra Singh Tikait, farmers' leader from the same western Uttar Pradesh belt as Charan Singh, hailed Deve Gowda as the 'Choudhary Charan Singh of the south' at a meeting in Muzaffarnagar.

In between, he was an independent legislator, spent long years as leader of Opposition in the Karnataka Legislative Assembly, had been an effective irrigation and public works minister, and chief minister in 1994 after many missed opportunities.

Even 25 years after he stepped down as prime minister, he has remained relevant in Indian politics. The book also describes in detail interactions between Deve Gowda and Vajpayee among several other things. The two would not have interacted as much if they had not been prime ministers and former prime ministers, and if one had not preceded and succeeded the other, it says.

Gowda succeeded Vajpayee immediately after his first 13-day brush with power, and there was the motion of confidence in which the two came face to face for the first time on the floor of the Parliament.

"Gowda and Vajpayee were two very different people. Vajpayee was essentially a Hindi person, Gowda used English to communicate, which in reality was notches above Vajpayee's felicity. If Vajpayee was full of rhetoric, flourish, and pregnant silences, Gowda was always about dry details, documents and a kind of drawl," the author says.