In their presentation to Rajiv they had shown a kind of feel-good, advertisement-type video on India's water and food production—pretty generalities with little substance. 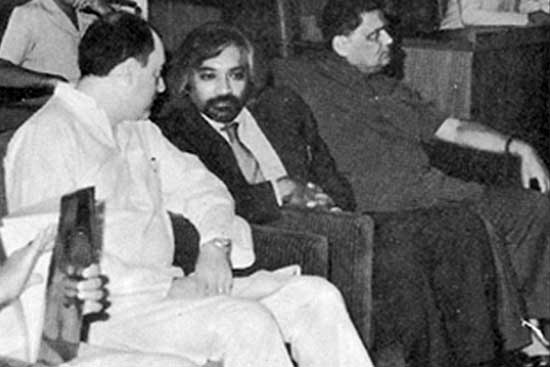 It is an understatement to say that I was acutely aware of what my relationship with Rajiv Gandhi meant, not just in terms of the opportunities it gave me but also personally. I treasured that bond. His thoughtfulness towards me and, equally, towards Anu, was something that touched both of us deeply.

I started commuting to India in 1981, but decided to move my family there in 1985. Of course, doing that meant uprooting them, which gave me a deep feeling of anxiety. Salil was ten, Rajal seven. They had been born in Chicago, they were enjoying their schools, their family and friends. Chicago was their home. A big move was going to create a major disruption in their lives. Anu herself hadn't lived in India for about twenty years. How would she feel about moving? I thought that at the very least I had to introduce her to Rajiv, so she could see for herself why I wanted to do this, and could begin getting comfortable with the idea of this transition.

My chance came when Rajiv went to Washington to see President Reagan in June 1985. I didn't have an appointment with him, but I called the Indian ambassador. 'Please tell the PM that I'm going to be in Washington with my wife. We would very much like to meet him.'

The ambassador said, 'There is no way you could do that. His schedule is solidly booked.'

'I understand,' I said. 'But if you would please ask him. Just say that Sam Pitroda would like to see him.'

Anu and I went to Washington, not having any idea if Rajiv would be able to make the time. Three friends came along with us, Dr Prakash Desai, Rajiv Desai and Dr Divyesh Mehta. We were being tourists and seeing some of the sights, when I heard from the ambassador that Rajiv was free for half an hour—between Caspar Weinberger, the then defence secretary, and George P. Schultz, the then secretary of state. All of us were free to come.

The meeting was at the Indian Embassy. It took us a while to get through the heavy security, and as we walked in I saw Weinberger leaving. When we got to the meeting room, I said, 'Mr Prime Minister, this is Anu.'

'Anu,' he said. 'Welcome. Come, sit here next to me.' I knew Anu's heart must be racing. This was the prime minister talking to her, charming, good-looking, in such a warm and welcoming manner.

'Anu, I know Sam wants to come to India. I want you to make sure the children's admission to school is taken care of. It's very important, and Sam may not understand these things in Delhi. Let me know. It's essential to get them into the right school.'

He was speaking to Anu in exactly the sort of language she wanted to hear. I couldn't help thinking what a truly exceptional person he was—what an effort he made and how relatable he could be.

Now, as I was finishing up with C-DOT, my relationship with Rajiv had only deepened. He would call me at night sometimes, at ten or ten-thirty. 'Sam, come.' So I would go with Anu to his home and we would talk, just the three of us.

But my personal feelings aside, I knew that my relationship with the prime minister had more or less given me carte blanche to take on whatever role I thought would make most sense post-C-DOT. I was thinking hard about how to bring technology to bear on India's most pressing problems and what I might do to further that. We had talked about it. I was now beginning to get some clarity on what I wanted to do.

Additionally, I was part of the Scientific Advisory Council to the Prime Minister, chaired by Professor C.N.R. Rao, a world-renowned scientist in the field of super conductivity and materials science. Other members of the council were Dr Ganguly, Dr Tandon, Dr Mashelkar, Dr Narsimha, Dr Raha and Dr Lavakare—India's most distinguished scientific minds. These were the people who had spent their lives in research. As a scientist, I wasn't anywhere near as accomplished as them, but I interacted with them regularly, so I was able to learn valuable lessons in agriculture, health, biotechnology, vaccines and other areas from them.

This group was always pushing for more research funds. But they also understood the need to use science and technology for the improvement of society. That was one of the main items on their agenda. What do you do with all this knowledge if not help the common man?

Being part of these discussions had helped me refine my ideas on the best ways to use technology to address specific problems. I was just about ready to make a proposal to Rajiv, when one evening I got a call from his principal secretary, Mrs Sarla Grewal. 'Mr Pitroda,' she said, 'can you come over right away? We have an emergency on our hands.'

I was alarmed. 'What's happened?'

When I got to her office, she told me. 'The PM is so angry, he just fired the secretaries of water and agriculture. He exploded at them.'

'What do you mean "exploded" at them? Why? What exactly happened?'

'They were reporting to the PM on what they were doing about water and agriculture. He was so furious at their presentation that he fired them both on the spot. This hasn't ever happened that the PM would fire two senior people like this. It will cause huge problems, big disruptions in those departments. I'm sure you can convince him otherwise. Please help.'

That same night I talked with the two department secretaries, effectively, the COOs of their ministries. But they didn't have much to add to what Rajiv's secretary told me. 'We were making the presentation. The PM thought it was really bad quality. He just fired us.'

I called Rajiv's office and told them we'd like forty-eight hours. Would his office please ask him to put the decision on hold for that time? Then I told the secretaries I wanted to meet with them the next day to better understand exactly what the problem was.

We decided to tackle the issue of water. 'We've been asked to ensure adequate water supply for rural India,' the secretary said.

'All right. How much water is needed?'

'What kind of water are you talking about?'

'Let me ask you some questions. Do you know how much water a dog drinks?'

'I want to know. How much water does a dog drink, a buffalo, a camel, a cow, a cat, a donkey, a goat? How much do people need for bathing, how much for cooking, washing, drinking? Please get this information—then we'll talk.'

The water secretary had simply not looked at the problem this way. He hadn't broken the issue down into its component parts, which one would imagine would have been the first thing on his agenda. But he and the agriculture secretary were bureaucrats, not specialists. They didn't get into the details. They were responsible for planning, but they didn't feel that a technical understanding was essential for the planning function, or at least for their function. In their presentation to Rajiv they had shown a kind of feel-good, advertisement-type video on India's water and food production—pretty generalities with little substance. Rajiv was a nuts-and-bolts kind of guy. I understood how those presentations must have infuriated him. No wonder he had stopped them midway and fired them.

I said, 'Look, if you don't break the problem down, how can you understand how much you need, and for what purposes? You'd require 20 litres per day, 50 litres, how much? And for whom? There are almost exactly the same number of animals per village as people. You need to know how much water they use, how much the people use. You can't plan without knowing these things. You certainly can't report to the PM without specifics.'

Before long they came back with studies showing hard numbers on water requirement and use in the villages. They needed 30 litres per day per person, 40 litres for cattle.

It wasn't that I knew much, if anything, about any of these issues. I was simply asking questions they hadn't asked themselves before they put together their presentations. A whole new horizon had appeared in front of the officials. There was a lot of technology in water and, of course, in agriculture as well. So we restructured the presentations together. Forty-eight hours later we sat down with the prime minister. They gave their presentations again, and this time he was happier with them. He took back their dismissals.