A semblance of peace has returned to Darjeeling but the tension still lurks. 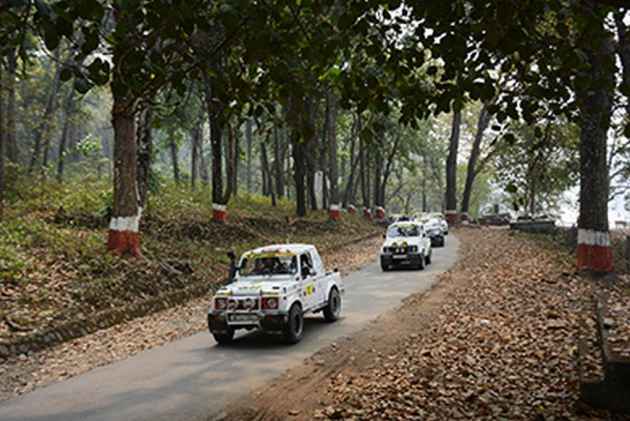 It was a sunny day in Phuentsholing, the picturesque border town in southern Bhutan, nestled amidst evergreen forests atop a misty hill. A comforting February chill permeated the air. Zephyrs swept through the valley deep down creating ripples in the crystal waters of the river below. Morning light glittered like gold on the leaves of trees. At a distant monastery, bells rang, its sounds reverberating across the mountains.

“We block out everything else and focus completely on the task at hand,” Mustafa told Outlook later, when asked what their secret was, for winning the biggest motorsport event of the eastern region, the annual Himalayan Drive, three years in a row.

The mega rally, which attracts the best driver-navigator teams from across the country, has just concluded its sixth edition late last month. But this year the event took on a special significance. The organizers deliberately charted its course through a region which has been the locus of tremendous recent political disturbance – Darjeeling.

The local separatist group, Gorkha Jana Mukti Morcha, which has been agitating for a separate state of “Gorkhaland” had imposed crippling strikes on trade and transport in the hill station. Led by Bimal Gurung, now absconding and wanted by the state police, they attacked government buildings and burnt down administrative offices. Overnight, they blocked off the main route to the hill station after packing off frightened tourists, cramming them into buses and other vehicles scurrying to the “safety” of the foothills in Siliguri.

The imbroglio lasted several months during which time the region erupted in sporadic violence. At least one civilian reportedly died in crossfires between the agitators and the police. During a siege on what was believed to be Gurung’s hideout, a young police officer was killed. Gurung managed to escape.

Chief minister Mamata Banerjee, who has unequivocally dismissed the idea of dividing Bengal, invited the more moderate faction of the party, led by Binoy Taman, for talks in Calcutta. This seems to have successfully diffused the agitation, at least for the time being. "We are not giving up the demand for Gorkhaland because it is a question of idenity," says a member of GJM, "but the way to do it is not by making the lives of our people miserable."

A cross-section of common local men, women and children whom Outlook spoke to talked about "being more comfortable with peace than violent agitations." Said a school girl Maya Chhetri, "It was terrible when the roads were blocked and the shops were shut. It was like living in a prison. Now it is back to normal and i and my friends and family like it."

Most pleased are the business communities. "The people of Darjeeling are essentially peace-loving. We don't like trouble. And tourists are welcome here because they keep our economy vibrant," said the owner of a luxury hotel.

When the Himalayan Drive arrived in Darjeeling from Phuentshiling, Bhutan, it found that the legendary summer capital of the British, was bustling with life. The comforting sight of shops lining the most famous street, the Chowrasta, chockablock with tourists haggling with merchants over every kind of merchandize, from tea to t-shirts, woolens to wine, was indication that Darjeeling was back to business.

“We were keen to highlight the present situation in Darjeeling and therefore decided to conclude the rally here,” explained Tamal Ghosal, founding member of Just Sportz, a Calcutta-based motorsport management company and organizers of the Himalayan Drive. Ghosal, however points out that the key endeavor of the “Sixth Edition” – over and above the rally’s main aim, which, essentially is the pursuit of motorsports –  was to “revive interest in this entire region.” Indeed, India’s northeast shares borders with so many countries, including Bangladesh, Bhutan, China, Nepal, Myanmar, that the region’s significance as far as India’s international relations with its neighbors is concerned cannot be overemphasized. “Our rally traversed three countries, Nepal, Bhutan and of course India,” Ghosal points out. “This is a definite first and a rare achievement in the history of car rallies.”

As for the participants, the micro is so much more immediate. “Initially I thought they were really rude,” said one of the organizers about Mohammed Mustafa and SK Ajgar Ali. “Throughout the duration of the five-day rally they didn’t even return a “hi” or “hello” far less smile or speak a few words. They duo just kept to themselves. But they consistently scored high and eventually won the first prize – one lakh rupees – and the trophy. After that they finally laughed with all of us.”

The same level of focus was observed in the runners up, Subir Roy and Nirav Mehta, who lost by a mere five points. “We are disappointed but we are sportsmen after all so we have to take it in our stride,” Roy told Outlook after the prize distribution ceremony in Darjeeling.

For the uninitiated, car rallies are not about speed. “On the contrary it entails a complex calculation of distance, time and speed,” explains Sanjay Maheshwari, founder of Just Sportz.  “If a motorist arrives earlier than the time designated for him, which is based on the distance from start to finish and the speed limit allocated, he is imposed more penalty points than if he were to arrive late. (Three penalty points for arriving earlier where as one penalty point for arriving later than the time designated.) This is because rash or reckless driving is discouraged.”

Controlled driving is key and of the two teammates in each car, the “navigator” is in charge of reading out the directions based on the instructions on his sheet while the latter’s job is to follow the instructions. The two categories of participants are the “national” or seasoned rallyists, whereas the “open” category participants are amateurs.  There is an application process and a fee charged if selected.

“The common misconception about rallies is that it is all about racing and reaching first,” says Rajendra Gaire of Nepal who was amongst the international participants in the rally. “But really rushing is not an option.”

And yet, interestingly, a common trait runs through all the participants whom Outlook spoke to. “There is an indescribable adrenaline rush, a need for speed, which drives us,” says SK Ajgar Ali.  “And so it is as though we have been compelled to drive.”