A Young India Fellow ’17, who volunteered with MKSS in July 2017, narrates his experience with the grass-root organization. 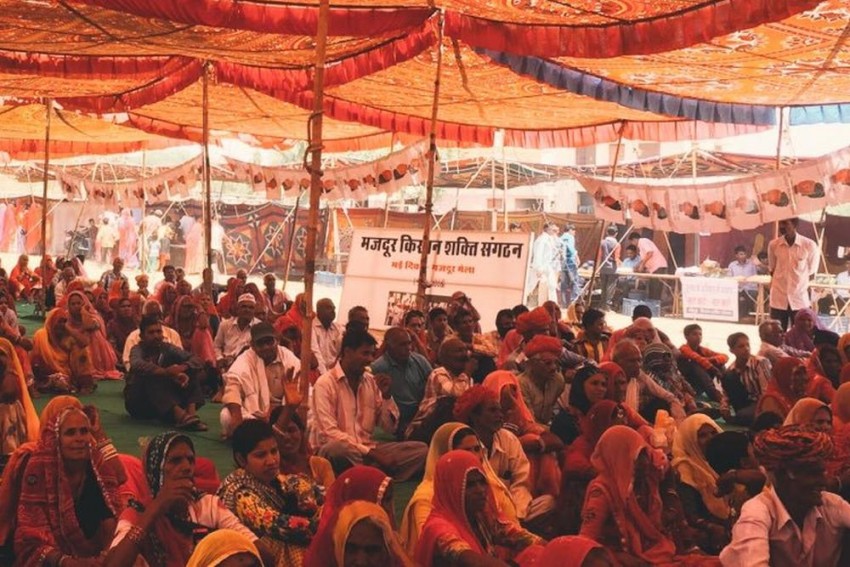 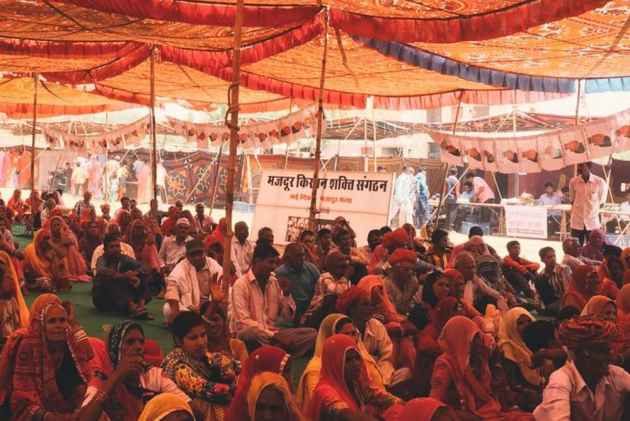 The day I arrived at Devdungri, I was greeted by Vineet who manages the joining and induction phase of the new interns. He is extremely composed; begins work early in the morning and carries on till late at night, without seeking any recognition. There is a strong conviction in the choice he has made: Vineet worked in the USA for seven years and quit his job to join MKSS where he, like the others working here, earns a sum of Rs. 200 per day, which is the daily wage rate in Rajasthan.

Shyam, who now works with the MKSS (Mazdoor Kisan Shakti Sanghathan) initially was a committed member of the RSS. Today when he recollects his days with the Sangh, he mentions how they were all convinced that the Muslims should one day be driven away to Pakistan. He says the turning point for him was one day when he went to a village where he saw the living conditions of Muslims who were suffering from Silicosis (a terminal disease caused by inhaling silica) and how they were denied access to government hospitals. Since that day he never went back to the RSS shakha. A few months later came back to his father Baluji, who has been working with MKSS. It was Baluji who helped his son break away from his past and start a fresh life.

Sushil, who is a current student of music from a college in Beawar, holds a rather progressive belief system and has been involved in social work from his school days. Along with his friends, he mobilized the rural student population to fight for the same rights that the urban students enjoyed. He worked with the CPI (Marxist) but resigned due to certain ideological differences and has now joined MKSS. A staunch devotee of Bhagat Singh, Sushil believes in the need to mobilise the youth of this country for any positive change to set in, and this he aptly captures in one of his favorite slogans - “Yuva Shakti aayegi, nayi roshni layegi”.

Ishwar and Kartik are the best of friends who grew up together in a nearby village and were early dropouts from school. They both went in search of employment to Gujarat, and found work as child waiters and cooks in different places. It is very common in Rajasthan for the youth migrate to Gujarat to work in local hotels. Kartik could not bear the sight of injustice and violence inflicted on his co-worker by their employer and left the hotel immediately. The employer would pay salaries on the 15th of the coming month, so that employees are compelled to not leave in between. Kartik, however, left without his salary and tried to join the Barefoot Campus in Tilonia as a cook. He endearingly calls her buaji. He also got his friend Ishwar to join MKSS and both of them today form a phenomenal and inseparable team that excels in street theatre and protest activism under the guidance of Shankar Mama.

Arunaji - who had left IAS, Nikhilji – who had left his graduation from USA midway, and Shankar Mama – who had dabbled with multiple jobs, met in Tilonia for the first time; when Nikhilji was on a Bharat Darshan of social work institutions. After several discussions, they realized that their ideals and goals largely aligned and decided to work with the people by creating a people’s organisation for claiming democratic and constitutional rights. They decided not to register it under the Societies Act, nor seek to work for projects and seek funds. They use methods of crowd funding from local people and sympathisers from outside. They do not receive institutional funds from India or abroad. MKSS runs on contributions from India. It is not a funded NGO. They came to Devdungri, because Shankar and his wife Anshi wanted to live in their own area. The place they found was a house that belonged to mama’s sister in 1987. This has been the office of MKSS ever since. Quite naturally, there was resistance from the local communities. When the three of them would visit the households of the local villagers and ask them what problems they faced, they would reply asking "What is your problem? Who is paying you to stay here?” Arunaji was staying with two men and this became a topic of gossip among the villagers. There came a time when Arunaji had to invite her husband Bunker Roy to stay with them for a few days, so that the people would stop thinking otherwise and not be averse to interacting with the three of them. The first protest which MKSS led was against the Thakur who had forcefully occupied a large piece of land in Sohangarh that belonged to the villagers. Efforts at mobilizing the villagers to voice their concerns against the Thakur were all futile, until the day the Thakur and his goons sent death threats to people in the Sangathan and even came knocking at their doors at midnight. The villagers then realized that the people they were questioning were in fact committed to their work.

The entire village came together with axes and ignited sticks to drive away the Thakur, and finally, the land was rightfully acquired by them legally. This was a major historic achievement of that time and it laid the foundation for the many struggles that followed. The next fight was for the minimum wage and this shaped into bringing one of the most powerful weapon for justice and transparency - the Right to Information Act.

Nikhil Dey spends most of his time travelling across the country and serves as the most important link between the work on the ground and the associated policy level changes needed at the top. The MKSS team was invited to join the march led by Azadi Kooch to mark the anniversary of Una incident. The Dalits were mobilized by Jignesh Mewani, a youth leader who emerged after the Una atrocity. They marched for the demand of land which was captured in the slogan, “Gaay no puchado tame rakho, aamni jameen aamne aapo” (You keep your cow’s tail but give us our land back). We met Nikhilji at Palanpur railway station. When we reached the gathering, the ground was filled with people. Soon, the yatra led by Jignesh came in and settled on the stage. The manner in which the event was conducted honestly caught me by surprise. It was very different than what I had imagined it to be. The Dalit leaders lighted a huge lamp at the beginning of the event and I could not help but wonder as to why they would follow a custom that had Brahminical origins. Jignesh gave a powerful speech for which he received a thunderous applause. He said that the land they had demanded has already been allocated to the desired people and to complete the yatra, we must all hoist the blue flag on that land.

When Nikhilji spoke, I could not help but smile, since I resonated completely with everything that he said. He highlighted the importance of the constitution of our country and how that book, if understood and followed well, could be a solution to most of the problems that exist in our country. He even pointed out to the people in the gathering that worshipping a leader was not the point of such a protest in the first place, and tried to convey to them that the leaders were standing there because of people and not the other way round. I felt this was the most important thing that needed to be said, since it was rather evident that throughout the meeting there were constant attempts by the organizers and the other speakers to put Jignesh on a pedestal. When the event ended in the evening, we came back towards Palanpur Station and found a park nearby, to sit down in a circle and discuss what we felt about the gathering.

I mentioned that there was no need of garlands or the lamp, since I did not feel that they were suited for the purpose of the meeting. Few others said that they noticed that people were not washing their own plates and that food was also being wasted in large quantities. Nikhilji then responded with an important point, which has stuck with me ever since. He said, “Always remember that we should not judge anything unless we are a part of it. What we follow at MKSS cannot be expected from others as everyone has their own beliefs and principles”. Instead what he pointed out was that there were no Dalits present who were recipients of the land. I realized that it is ethical to let people speak for themselves as opposed to us representing someone else’s voice. Nikhilji constantly nudges us with interesting prompts in our group meetings, so that different voices can be heard. He often draws instances from history, Ambedkar and Gandhi featuring in the most notable ones.

On another day there was a meeting organized in Loktantrashaala to lay the foundations of a campaign for Right to Healthcare. Various people, belonging to different organizations and groups were invited to attend the program from across the state of Rajasthan. These were people working at various levels ranging from child trafficking to nutrition. The way he facilitated the sessions with minimum interruption yet ensuring the discussion did not sway into chaos was astounding.

Aruna Roy or Naaniji as she is lovingly addressed by the people at MKSS has lived and continues to live a life which is an inspiration for many. During my stay with MKSS, she had once come to the Loktantra Shaala for a meeting, after which she called the interns to eat lunch with her. As we all sat down to eat, I started feeling nervous although I had secretly been waiting for an opportunity to interact with her. As much as I was intimidated and under pressure to only indulge in intelligent and rational talk with Naniji, I also realized through the conversations, that she had a rather affectionate and a loving side to her. This came through most strongly when she spoke about MKSS and its journey through the years. I could tell that she treats it like her own child by constantly providing a nurturing space for it to grow. While talking to us, there was this one moment when she said that the youth of this generation are clever and without a second’s delay a smile had come across my face. The next sentence she said made me feel stupid for my immediate sense of gratification – “A fox is clever. Never be like a fox. One should be intelligent and not clever.” It sounded like a simple sentence picked straight from a school textbook but I think but it did make an impact, maybe because I then recalled how Naniji came to Devdungri, after quitting the IAS.

Almost everyone who were working with MKSS were present that day in Loktantra Shaala and I felt privileged yet insignificant at the same time. In all honesty, it was the most beautiful feeling. As Naniji had almost finished eating, I wanted to ask her the question that I had been formulating and reframing within my mind for a long time. In the end, I put across my question quite simply: “How difficult is it to do what you do?” She smiled, ate the last morsel on her plate and said, “It was very simple, I just had to live my principles.” Soon after that, Nikhilji and Naniji left for Tilonia en route to Jaipur and Delhi, and we came back to Devdungri. I had another question, but I kept it to myself: How difficult is it to live one’s own principles?