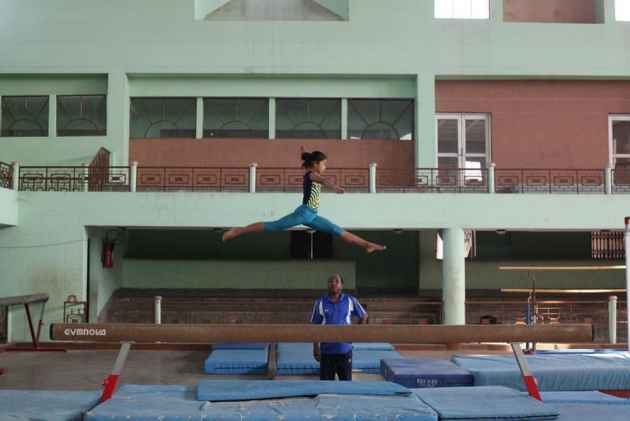 The recent news of India’s top gymnast Dipa Karmakar being forced out of the upcoming Commonwealth Games owing to her knee injury came as a big setback for Abhishek Singha and many other aspiring athletes like him in Tripura.

Karmakar was the first Indian female to compete in the Olympics where she finished a historic fourth in the women’s vault at the 2016 Rio Games. Since that stunning performance, gymnastics saw its revival across the country. Karmakar’s home state, Tripura, wasn’t an exception. Since then, hundreds of aspiring players thronged gymnasiums around Agartala and smaller centres outside the capital to become the next Karmakar.

But this is where the tussle between the state and Centre begins. “After Dipa’s Olympics performance, the Union government had promised to provide all gymnastic equipment but nothing has reached us in the last two years. Recently, we found out that the same equipment were given to Rajasthan, instead,” said Dilip Chakraborty, secretary of the Tripura Sports Council.

With the state going to the assembly polls tomrrow, Chakraborty hopes the next government, no matter which party comes to power, would improve the status of the sport in the state.

For the first time, the Left-Front government is on a shaky ground, and is battling a huge anti-incumbency factor across the state. Dasarath Deb State Sports Complex in Agartala, songs of BJP’s campaign “Chalo Paltai” (let’s change) are blaring through loudspeakers. Though neither the government coaches nor the sports council’s secretary were willing to speak on record about the shortage of state and central funds for gymnastics, they all agree that gymnastics will need much more focus and funds, if Tripura wants to retain its place as the capital of gymnastics in the country.

In his first election rally in Tripura, Prime Minister Narendra Modi had launched an attack on chief minister Manik Sarkar right in his own backyard. Punning on the name of the chief minister, he told the crowds that Tripura is wearing a wrong "Manik", meaning gem, and it was time to take it off and wear a Hira, a diamond. Hira was another of his acronyms - standing for Highway, Iways, Roads and Airways. Soon, Manik was trending on Twitter.

Surprisingly, there was no mention of sports infrastructure for the state in his speech. In reality, with a total annual budget of Rs 2 crore (excluding the Rs 5 crore given by the Centre for rural sports), the state struggles to provide decent training, stipends, travel and accommodation to its athletes. Karmakar, being an Olympian, is allowed to travel by air but all other athletes have to travel by train even for a national championship. For the ongoing national championships in Mohali (February 16 to 18 ), the state athletic team started traveling almost a week in advance, and is being put up in homes of acquaintances of coaches and players.

Even for Karmakar, it wasn’t an easy journey. But 14 years of single-minded practice and planning helped Karmakar put Tripura on the international sporting map. She won the vault bronze at the 2014 Glasgow Commonwealth Games. The nation, and the world, noticed — India’s first woman to win a gymnastic medal at a major competition.

“Her success at Rio is historic, considering the difficulties she faced. She had to practice the floor exercise without a mat. When Dipa first started to vault, she used to jump from this (a makeshift platform) onto a pile of mats,” said Saraju Chakraborty, sports editor with an Agartala-based daily, Syandan Patrika. Karmakar’s bronze at Glasgow gave a much-needed fillip to the sport that had slowly begun re-emerging after peace had been restored under the successive Left Front governments.

“It was like a blessing for all sports in Tripura…Financially, we are a much weaker state, and because of the transportation connectivity issues, everything takes more time and money. We all know that for us morale is more important than material support”, added Chakraborty.

He, however, takes pride in the collective effort made by the state to construct a yet-to-be-inaugurated “world-class” indoor stadium in Agartala.

“But the equipment for the new stadium are yet to arrive,” he added.

Tripura, the home of gymnastics

Gymnastics’ history in Tripura began when an army sports instructor settled in the state in 1963. From Patiala’s SAI academy, Dalip Singh arrived in the state armed with Soviet technique and training he had picked up from a visiting Russian coach, N I Takaishvili.

“He sowed the seed of gymnastics in the state, we consider him the father of gymnastics”, says Mantu Debnath, the state’s first Arjuna Awardee and former student of late Singh.

“For 20 consecutive years after 1965, we dominated every gymnastics championship at the national level and those were our first golden age”, Debnath recalls while on his way to Khumulwng Judo and Gymnastics Centre, 40 kms away from Agartala.

The state government actively supported sports and provided jobs to medal-winners who brought glory to this little corner of India. Children, particularly from low-income families, enrolled in gymnastics training in the hope of a better life. Then there was a lull. In the 1990s, as the state’s law and order collapsed because of ethnic strife between tribals and non-tribals (Bengalis), gymnastics suffered in the climate of fear and mistrust.

No dearth of talent

Today, besides the new and still non-operational gymnasium, there are two other gymnasiums in Agartala. A reasonably well-appointed one is housed in the Dasarath Deb State Sports Complex where children from the sub-junior to the senior level are admitted and provided free-of-cost education and training by the government. It is here that Gorang Chandra Pal can be found every morning imparting training to some of the state’s best gymnasts. When asked who is hero, Singha, takes the name of KÅÂÂÂÂhei Uchimura, a Japanese artistic gymnast. But he quickly adds: “Dipa di and other seniors are also very good”.

His coach, Pal’s own story bears some similarity to that of Mahavir Singh Phogat. “I couldn’t play at the international level but I have made it my life’s mission to help others realise their full potential”, Pal says while supervising 12-year-old Sita Rani Sarma, who is practicing dance-based moves on the balance beam.

Nearly 50 kilometres away, more children, mainly belonging to Tripuri, Halong, Rehang and other tribes practice every afternoon in the Khumulwng Judo-cum-Gymnastic Centre built by the Khumulwng Autonomous District Council.

“Khumulwng means a garden of flowers in Kokborok, the local language. Our government’s hope is that this centre can become a garden of the state’s best gymnasts where they are seeded and nourished,” said principal director of the centre Samarendra Debbarma.

The writer is a freelance journalist based in New Delhi.