Who Indeed Was Agrasen?

'PK' and a half page advertisement on Saturday draw attention to the rule of Agrasen and the community he is credited to have established. 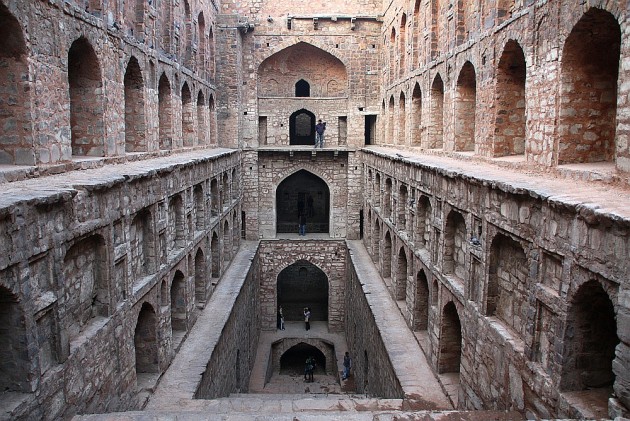 A half-page advertisement in newspapers released by Delhi Government greeted people on the birth anniversary of Maharaja Agrasen. The advertisement raised eyebrows for two reasons. One, it had the photograph of the Deputy Chief Minister Manish Sisodia and not of the chief minister ( Indeed in The Indian Express Sisodia's photograph appeared in three advertisements and on two consecutive pages). It triggered speculation whether the obviously deliberate and conspicuous omission of Arvind Kejriwal in the advertisements carried any political significance.

The advertisement also drew attention because it is not every year that the Delhi Government releases advertisements to remind people of the Maharaja's birth anniversary. Could it have anything to do with the fact that Maharaja Agrasen is hailed as the founder of the Aggarwal community ? The legend associated with him does explain how the ruler gave up his 'Kshatriya' roots and turned to business for the prosperity of his kingdom. On his death he is credited to have divided his kingdom to 18 of his sons and each allotted a 'Gotra' after the Guru who trained him. The Agarwals continue to adhere to the 18 'Gotras', it is said. 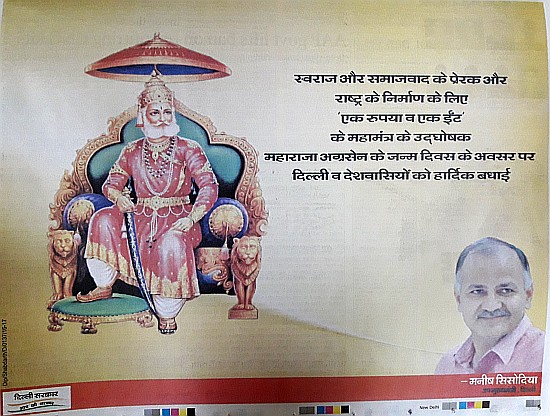 Whether Maharaja Agrasen was the first Vaishya or Bania ruler in India (could Narendra Modi have been the next five thousand and odd years later ?) or not, he is unquestionably revered by the community. There are roads and colleges named after the great ruler and the community itself has thrived and prospered across the country from Hisar in the north to Chennai in the South. And the community has produced freedom fighters like Lal Lajpat Rai, businessmen-cum-social workers like Jamnalal Bajaj, political thinkers like Rammanohar Lohia and singers like Shubha Mudgal.

Hisar in Haryana, believed to be the place where Agrasen had founded his new kingdom and called the place Agroha, of course has been the seat of industrialists Naveen and Sajjan Jindal and businessman and media baron Subhash Chandra.

Like all legends, there are alternative narratives. Agrasen according to some chronicles was the father of Kansa and Devaki ( mother of lord Krishna). Some accounts hold his kingdom was known as Pratapnagar and that he had fought and defeated the rain-god Indra, who coveted the ruler's wife. Others have suggested that he was actually a 'Yadava' king and ruled over Mathura.

However, there is one monument in the heart of Delhi which bears his name and has not changed much. Barely two kilometres from India Gate and one and half a kilometre from Janatar Mantar is the stepwell known as ' Agrasen ki Bawli'. Off the relatively quiet Hailey lane close to Connaught Place is the step well with four levels and 108 steps leading to where once there was the well. The protected monument has been attracting visitors ever since Aamir Khan's film PK used the Bawli as a shelter for the alien played by Aamir Khan himself.

British records in 1868 called it the ' Oojer Sain' bawdi. And an iconic photograph taken by India's celebrated photographer Raghu Rai in 1971 did show the well with water and a young boy leaping into the water from one of the steps. It has now dried up in the wake of high-rises which have come up around it. And even now, if one braves the bats and goes down to the well and looks up, one can get a spectacular view of some of the high rises on Tolstoy Marg. It's a little spooky and has long been deemed to be haunted.

A mosque on top and Buddhist motifs found on the thick walls have survived the ravages of time. And while there is no authoritative evidence to date it back to 5,185 years when Agrasen supposedly ruled, it does remain central Delhi's oldest monument.