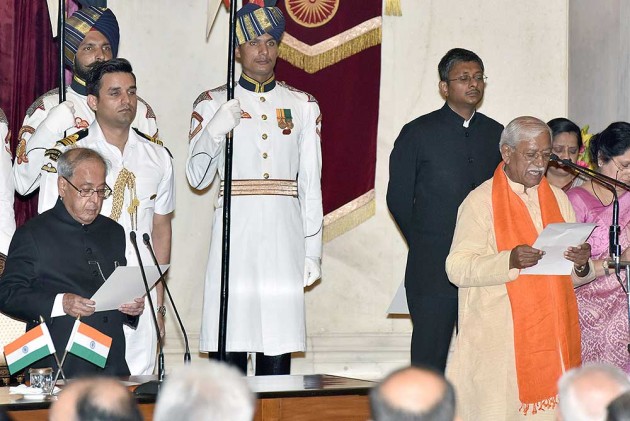 The Krishna Valley is an appellation for a grape-growing region in Karnataka's northern Bijapur district where for years Ramesh Jigajinagi, one of the new entrants into Prime Minister Narendra Modi's council of ministers, raised his vines. That's, however, just one of the appellations for the 64-year-old, a prominent Dalit leader from north Karnataka. He was a police officer once, a colleague recalls, and his Lok Sabha profile lists 'musician' among his professions.

Jigajinagi is an agricultarist primarily and was growing table grapes well before he became a politician, says Bangalore-based wine expert Alok Chandra. Bijapur is located on the border with Maharashtra where wine making as an industry made its small beginnings in the late eighties. Jigajinagi then shifted to growing wine grapes before setting up his own winery, Hampi Heritage, about a decade ago when Karnataka unveiled a wine policy.

The decision to appoint Jigajinagi as minister -- a suggestion made by the Karnataka BJP unit to its central leadership -- clearly points to the party getting ready for state elections in 2018. A few months ago, the party chose Lingayat strongman B S Yeddyurappa as state party chief (though some fissures have come out into the open since) and Prime Minister Modi too chose Davangere for a rally to mark his two years in office. Reports suggest that G M Siddeshwara, union minister of state for heavy industries and public entreprises, will be making way for Jigajinagi.

PGR Sindhia, a former Janata Party leader, thinks the PM's made the right choice in Jigajinagi. "He protects the interests of Dalits, there is no doubt about that. But he does it without antagonising anybody," says Sindhia, who was a colleague of Jigajinagi's in the Ramakrishna Hegde government. Jigajinagi was known as a staunch Hegde supporter, even following him into Lok Shakti, the party Hegde formed in the late nineties. He joined the BJP in 2004 after Hegde's death. "To his credit, we have to say he does not quarrel with anyone and is a go-getter," says Sindhia.

Jigajinagi has been elected MP five times and before that, he was thrice elected to the Karnataka Assembly, having held various portfolios including being a state Home Minister.