Why Are Political Parties Scared Of Speaking Out Loud On Violence Against Muslims?

It betrays a faulty understanding within these parties that Hindus cannot be talked to about what is happening in the country. 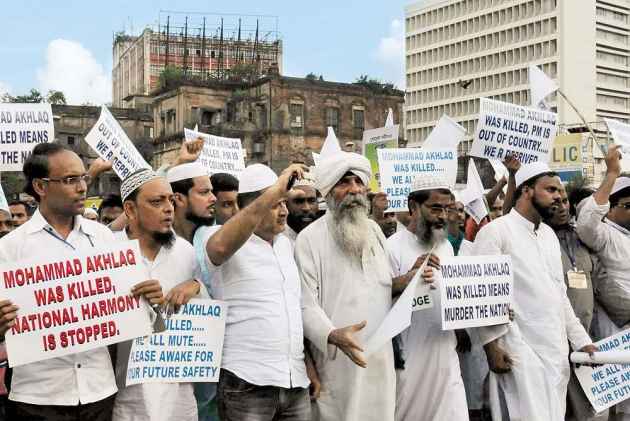 Muslims in many parts of India are marking Eid today with black band to register their anguish and protest over the unabated assaults on Muslims which have also resulted in killings. Muslims are being attacked on the excuse of stealing of cattle, committing a crime or carrying beef or raising slogans for Pakistan or bursting crackers to celebrate their victory over India in a cricket match, or for simply looking Muslim.

While these attacks and their increasing frequency have created disquiet insensitive Indians, they seem to have left the political class cold. There have been tweets and statements here and there but it is clear that more than a genuine expression of grief or protest they are an attempt to put on record that they had also spoken.

The opposition has been criticising the head of the government for remaining silent in the wake of attack on a large section of Indian population. It shows again either their naivety or cleverness. Do they not know the platform on which the BJP has fought the last Parliamentary election and the subsequent assembly elections? Did not all major political leaders give vital signal through their statement and exhortations calling upon their electorate to make a choice between pink revolution and white revolution or to vote for the safety and dignity of their mothers and sisters or to save land for rhinos and drive away the infiltrators who have encroached upon their habitat or to pack and throw the Bangladeshis out of India once the party was elected to power? These statements, which also called for defeating those who patronise cow-eaters, were, to put it mildly, communal and patently anti-minority.

How do we expect a political party to go against its very raison d'etre? And even if it speaks what is being demanded from it, its constituents would know that it has been done only for the sake of form. The compulsion of the chair! They know that it has no substance.

This much we know about the present ruling party. The minorities have no expectation from it. But what about the rest? Why are political parties so scared of speaking out loudly about the criminality of the acts? Or, more than criminality, the inhumanity of it?

Once, after the burning and destruction of the Muslim locality in Atali , a village in Haryana and very close to Delhi, some teachers went to the chief of the Delhi Congress Party and asked him why had the party not reached out to the victims and come out boldly in public against the atrocity! He candidly said that the Congress Party in Delhi was struggling to become the party number two and it could not be done without a major shift in the Hindu voters towards the party. The Congress was already defamed through a systematic propaganda as a pro-Muslim party which made Hindus detest it. So he argued helplessly, the party cannot afford to do anything to make it look sympathetic to Muslims!

Interestingly, this is the argument you hear from other parties as well. It explains the inaction on part of the AAP when violence broke out in Trilokpuri in Delhi. Here Valmikis were faced with Muslims. AAP was wary of going public with its sympathy for Muslims. Their leaders said that they would help Muslims more if elected to power and it would be foolish to sacrifice Hindu votes by being perceived as taking the side of Muslims.

Political parties seldom mobilise their members or other resources in the situation of massive uprooting of Muslims as in Gujarat in 2002 or Muzaffarnagar in 2013 , leave alone Assam and other places with an aim to provide relief to them. The work of rehabilitation is also left to the religious organisations or civil society organisations.

While there are customary Iftar Parties and Eid Milans where male political leaders display their skull capped heads, they shy away from visiting and being with them when they are attacked or killed in a hate-crime. We are told that the visit of Rahul Gandhi to the kin of Akhlaq in Dadri created a mild stir in his party, some thought it was not wise to rush in such situations! We also need to remember that no leader of consequence in the Congress Party has yet met publically with Zakia Jafri, wife of Ahsan Jafri, the Congress leader of Ahmedabad butchered in the violence of 2002.

It betrays a faulty understanding within these parties who cannot, however hard they might try, wash the stain of secularism on them, that Hindus cannot be talked to about what is happening in the country. It is the absolute lack of confidence in the capacity of Hindus to empathise with others. But in reality, it shows a loss of confidence in themselves, a debilitating feeling of inability to converse with Hindus in a human language. It seems all political parties are convinced that the BJP has won the battle for the minds of Hindus and there is little that can be done about it.

India has been through worse or more perverse forms of violence if we look back at 1946 and 1947. Hindus and Sikhs had genuine reasons to justify their hate and anger against Muslims then. They had been through unimaginable savageries at the hands of Muslims in what was now Pakistan. And yet, there were leaders who faced their anger but did not lose their nerve. Most of these leaders were themselves devout Hindus, Gandhi being only one of them even if the foremost. They stood against the current of hate with firm feet and argued with their fellow people. And there was listening.

It was about the faith and confidence of the leaders of yesteryears in themselves, in their own conviction. When we see our modern leaders wavering and hiding behind the argument of waiting to let the tide of hate subside, one can only pity their self-deception. It is high time they come out of their state of stupor and relearn to speak sense.