Why Govinda Remains Trickster No. 1 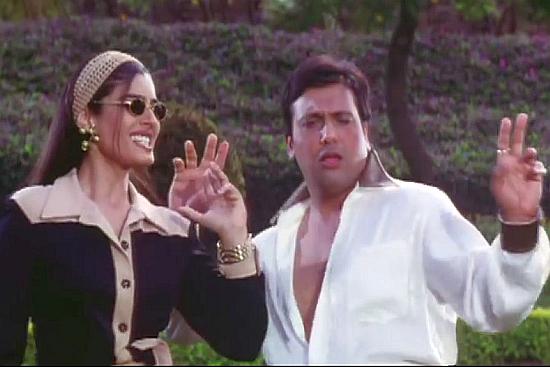 In Govinda's movies of the 1990s, mostly directed by David Dhawan, a certain pattern governs the proceedings. Govinda, often accompanied by a sidekick, usually gets the better of a rich father or an established authority figure. Apart from a cursory romance played out in jaunty side-by-side choreography with an interchangeable young woman, Govinda's characters defy social convention. Sometimes he is a rich boy living a shoestring life, playing cons in such films as Haseena Maan Jaayegi, or posing as a servant in Hero No. 1. Other times, he is a poor boy asserting his right to equal social standing with the rich, as in Dulhe Raja or Coolie No. 1.

In all these avatars, Govinda is both cunning and foolish, acting impulsively and comically, and yet running rings around those who would oppose him. He is an embodiment of the Trickster, an ancient archetype who appears in many guises in many cultures across the globe. The trickster, armed with high intelligence and quick thinking, thwarts social conventions through deception and craft, upsetting the established order often to the benefit of common people. The trickster is mischievous, deft, and above all entertaining. He is part hero, part benefactor, part avenger, part clown. He makes the good guys laugh and cheer, and he fools the pants off the bad guys. He is, in short, everything one expects from a Govinda character.

The ultimate trickster figure of Hindu mythology is Krishna, and like Krishna, Govinda's characters are playful, dynamic, and mischievous. His antics always win the hearts not just of the heroine, but of others who are placed in opposition to him, often the heroine's family and even his own family. One of Krishna's most beloved movie avatars is Rajesh Khanna's Raghu, the titualar character in Hrishikesh Mukherjee's Bawarchi, who serves as matchmaker, music teacher, advisor, and spiritual guide to a chaotic family, all with the delightful natkhat touch that completes his identification with the mischievous divine. And in Hero No. 1, Govinda reincarnates that character almost scene-for-scene, embodying the trickster-Krishna all the way as he lovingly dupes and manipulates his marks while guiding them on a path toward a better life. Through his good-natured deceptions, he repairs the family's broken relationships and spreads love and good feeling through the household.

In another mythological episode, Krishna creates multiples of himself so that there are enough of him for each of the gopis to love. Likewise Govinda often multiplies in his movies. In Aankhen, Govinda plays multiple roles – the wily gadabout Bunnu, loved by Ritu, and Bunnu's country cousin Gaurishankar, loved by Chanda. In other movies Govinda even dispenses with the double-role when he spreads the love around; In Haseena Maan Jaayegi his character disguises himself as his sidekick's chacha, only to have Bindu fall in love with the disguise. And in Coolie No. 1, he invents for himself a fictitious brother, Golmaal-style. 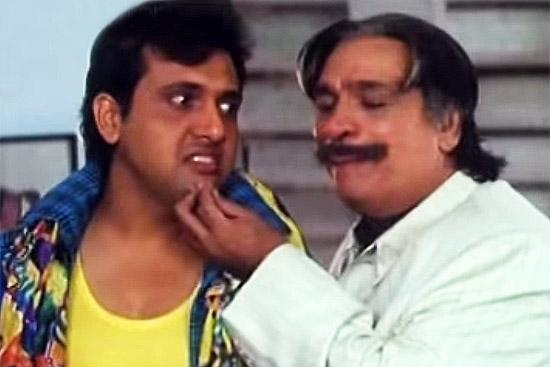 Many mythological trickster figures include shape-shifting in their toolkit of tricks and deceptions by which they achieve their ends. Hanuman, another incarnation of the trickster archetype in Hindu mythology, changes shape several times in the Ramayana, now taking the form of a cat, now of a mountain. Govinda, too, is an impersonator, besting his adversaries with disguise again and again. In addition to the chacha of Haseena Maan Jaayegi (a film which nods to Hanuman with a mischievous monkey of its own) and the pretend tycoon brother of Coolie No. 1, he takes on many guises to embarrass and humiliate his adversaries. In Dulhe Raja, he poses as the Senior Superintendent of Police, punking a junior inspector (played by Asrani) badly enough to get him fired. And in Shola aur Shabnam, he poses as Sridevi (!) to pull one over on the tyrannical head of his military academy (Anupam Kher). Indeed, like the Norse trickster, Loki, Govinda is not afraid to bend gender rules to make mischief, often posing as a woman, as in Aunty No. 1.

Tricksters frequently work their mischief for the greater good, operating from the position of the social outsider to overcome a power-wielding oppressor. Brer Rabbit, the trickster hero of African American folklore, outwits oppressors in this way, and so too do Govinda's tricksters, so often working their tricks for everyman justice. In Coolie No. 1, as a hardworking and honorable coolie, he teaches a tough lesson about the destructive nature of greed to The Man, in the form of Kader Khan, a tycoon who won't allow his daughter to marry a man any less rich than himself. And in Dulhe Raja, he bests Kader Khan again, this time as a humble dhabawala fighting the good fight against an avaricious hotelier who would like to see his dhaba razed to the ground. Govinda's tricks and deceptions are never affected with malice; he remains the loveable hero even when fooling and humiliating his opponents. It's hard not to love a character who taps into ancient archetypes and applies delightful antics toward positive social ends. It's why Govinda always remains Trickster No. 1.