Why I Believe Sanjiv Chaturvedi

A closer look at whistleblower and anti-corruption crusader Sanjiv Chaturvedi, one of the recipients of the Magasaysay award this year. 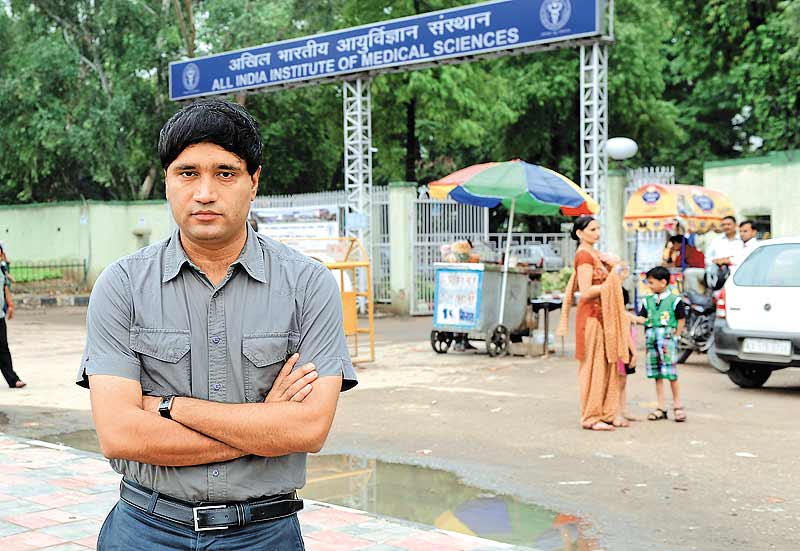 For the past one year Sanjiv Chaturvedi has been drawing salary as Deputy Secretary posted at the All India Institute of Medical Sciences (AIIMS) but has had nothing to do. Divested of his role as the Chief Vigilance Officer by the Modi Government, he has been reduced to dealing with pension matters.

So every morning he walks from his residence across the road from AIIMS and occupies his ground floor office, aware that if he steps out, it might be held against him. The Government which came to power on the plank of ‘Minimum Government and Maximum Governance’ has repeatedly made it clear that it does not need his services. But at the same time it is loath to let him go, sitting over the request of the Delhi Government to spare Chaturvedi’s services on lien.

The obstacles that the Union Government has been putting up for releasing him would have been comical if the issue had not been so serious. But Chaturvedi somehow never shed his trademark infectious smile.

I first learnt about him when I was working for a newspaper in Chandigarh. My attention was drawn to some intemperate language used for the Indian Forest Service Officer by both the chief minister Bhupinder Singh Hooda and his Forest Minister, Captain Ajay Yadav, if I remember correctly. My curiosity was aroused and I asked to see a copy of the charge sheet served on him.

The documents were open to question and I found that while some other newspapers would carry the officer’s version, the newspaper I worked with never did. It was clearly unfair and I tried to make amends and got a few more balanced reports published. That was when Chaturvedi called up out of the blue to thank, adding with a chuckle that I was inviting trouble for myself.

He sounded cheerful although he had instituted cases against both the chief minister and the forest minister. Haryana does not have much of a forest cover and I found it funny that he would accuse the ministers of encroaching into forest land while building their farmhouses. But I was told that Chaturvedi had a reputation for doing his homework and if he had instituted cases, they would be hard to contest.

I never met him till I shifted to New Delhi. I knew that he had shifted to AIIMS on deputation and meticulous as ever, he had sent a text message with his contact numbers.

It is at AIIMS that I met him. He was drumming on the table with his fingers, peering intently into a file and speaking on the telephone to someone, all at the same time. I watched him as he disposed of files, gave instructions and dealt with a steady stream of visitors who wanted his help to admit friends and relatives. I developed a liking for his unhurried style and also the firm but pleasant way of saying ‘no’ to people.

By the time we met next, the NDA Government had taken over and the Union Health Minister Dr Harshvardhan had divested him as the Chief Vigilance Officer. The minister claimed that Chaturvedi was not eligible for the post (Chaturvedi was the first incumbent) and that the Central Vigilance Commission had not given its clearance.

I found Chaturvedi his usual self. Why would CBI and the CVC act on my recommendations if the CVC did not recognise me, he asked with a smile. He had already written to the minister, he said, challenging the latter’s statement and had pointed out that the CVC’s website also displayed his name as the CVO at AIIMS.

It was then that he narrated how Congress leaders, Haryana chief minister Bhupinder Singh Hooda and the Union Health Minister Ghulam Nabi Azad had gone after him. The Haryana chief minister, he recalled with his trademark grin, had made it a prestige issue to ensure that Chaturvedi is denied any posting of any significance in New Delhi. “He would personally call on the Secretary and lobby against my posting,” Chaturvedi claimed to have been told by the officials themselves.

He then fished out an annual appraisal signed by Ghulam Nabi Azad. The minister had given him an outstanding rating even after hounding him for months! No wonder Chaturvedi wore it as a badge of honour. AIIMS has a budget that is higher than all the Army hospitals in the entire country. And Chaturvedi had gone after administrators as well as doctors who flouted rules, made money on the side, favoured dubious suppliers and contractors or availed of facilities meant for the aam aadmi. He spoke of some of these cases and it was not difficult to see why he would have powerful enemies.

I found it quite fascinating and I began asking people at AIIMS about what Chaturvedi was doing. It was a burly ward boy whose name I no longer remember who told me, “Sanjiv sir is our God”. But he would not utter one more word to explain why, fobbing off my questions with a shrug and a smile. It was much later that I learnt that Chaturvedi had helped streamline their PF payments and service conditions on contract.

Finally what convinced me that he is genuine were the stories planted in the media against him. Wasn’t he guilty of rowdyism when he was a probationer? Wasn’t he the guy who faced disciplinary proceedings at the Academy? Weren’t there charges against him under the Dowry Act? Wasn’t he separated from his wife?

None of these questions were related to his work. Nor did they address issues raised by the Health ministers. The campaign was so brazen and so evidently planted that only people who had plenty of time, resources and contacts could have orchestrated it and targeted one man. With the Magasaysay award conferred on him on Wednesday, is he having the last laugh?