Dhami said that he has been working 20 hours a day to bring things back on rails. "I meet everyone and have put all the protocols on the shelf. I make sure traffic is not stopped when I move and I do not allow security concerns to create a wall between me and the people. 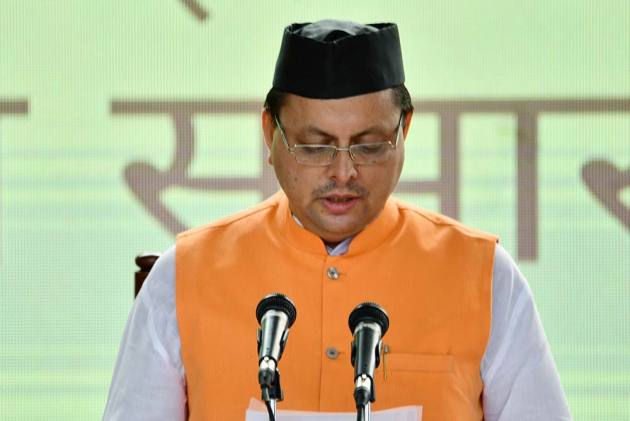 With the elections just months away, he is preparing for the biggest test of his political career, but that does not seem to deter Pushkar Singh Dhami, who was catapulted into the chief minister's seat in July this year. Acutely aware of the challenges that he faces, Dhami is also confident of the BJP returning to power in Uttarakhand.

In an exclusive interview to IANS during his three-day visit to Lucknow, the chief minister said, "We are working at a break-neck speed. So far, I have taken over 400 decisions that will benefit the common man. We have ensured positivity in the atmosphere and people of Uttarakhand are already looking forward to a BJP government again."

Dhami said that he has been working 20 hours a day to bring things back on rails. "I meet everyone and have put all the protocols on the shelf. I make sure traffic is not stopped when I move and I do not allow security concerns to create a wall between me and the people. My family -- wife Geeta and two sons -- live in my village while I live alone in Dehradun. This allows me to concentrate firmly on my goals and not allow any distraction," he said.

The chief minister admitted that he was working to remove 'traces of the anti-incumbency factor' and ensure a forward-looking atmosphere in the hill state. "I have asked all departments to prepare and present a road map for the next ten years so that we can start working on them right away. The state has already been battered by a series of natural disasters and we are fully focussed on development without losing time," he said.

Dhami said that in his meeting with Uttar Pradesh Chief Minister Yogi Adityanath on Thursday, he had managed to resolve asset sharing disputes that had been lingering for over 20 years. He added that he was also easing the policies for filmmakers so that filmmaking could become a pleasurable experience in his picturesque state.

While the chief minister steered clear on questions related to infighting in the party and the challenges he faces from within, he said, "We are already in the election mode and everyone's priority is to ensure that we return to power. I have requested Yogi Adityanath to campaign in our state." Elated over the recent praise he earned from Prime Minister Narendra Modi, Dhami said, "Whatever I am today is because of the blessings of the Prime Minister and other party leaders."

During his visit to Lucknow, Pushkar Singh Dhami visited his hostel room in Lucknow University and met old acquaintances. "It was a trip filled with memories and nostalgia. I have studied here and spent several years in student politics. It was a great experience going back to my hostel room and meeting friends," he added and said that though he thrived on memories, he always worked for tomorrow.