The SC verdict is a landmark verdict. It clearly rules that the rivers are national assets and no state can claim sole right over it. 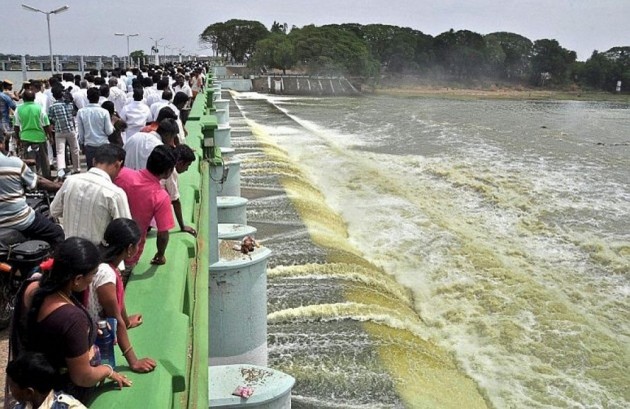 File Photo
Ashok Swain 2018-02-17T11:30:57+05:30 Why Cauvery Verdict Might Encourage New Water Conflicts To Emerge In India And Why Supreme Court Should Remain Prepared To Deal With Them

India’s Supreme Court has finally given a verdict on 16 February 2018 on the Cauvery River dispute over the allocation of shared water among the riparian states. In this verdict, which will be binding for 15 years, Karnataka has received 14.75 TMC feet extra water, from the share of Tamil Nadu, allocated by the Cauvery Waters Disputes Tribunal in 2007. After 17 years of judicial investigation, the tribunal in 2007 had allocated 419 TMC feet of water annually to Tamil Nadu, 270 TMC feet to Karnataka, 30 TMC feet to Kerala and 7 TMC feet to Puducherry. However, all four basin states had refused to accept the tribunal verdict and had challenged this allocation in the Supreme Court. In its verdict, Supreme Court has allocated more water to Karnataka taking from Tamil Nadu, and has kept the shares of Kerala and Puducherry unchanged.

This Supreme Court verdict will have a huge political significance, particularly when Karnataka is going to election soon and the Tamil Nadu’s post-Jayalalithaa politics is passing through a churning process. More than the on-going politics in these two southern states, the impact of this Supreme Court’s verdict will be immense on country’ hydro-politics as well. India does not have a national water law. In the absence of it, India’s Supreme Court seems to have been guided by the 1997 United Nations Convention on the Law of the Non-Navigational Uses of International Watercourses, which has come into force in August 2014, but India has not signed it yet.

Following the principles of the article 3 of the UN Convention, Supreme Court has rejected Karnataka’s plea and declared the old agreements signed in colonial period between Karnataka and Tamil Nadu in 1892 and 1924 are legally valid. More importantly, Supreme Court while allocating the Cauvery water has prioritized the principle of development and protection of the shared water in an equitable and reasonable manner as the article 5 of the UN Convention defines. The reallocation of 14.75 TMC feet extra water to Karnataka has taken into account the available 10 TMC feet groundwater in Tamil Nadu and 4.75 TMC feet drinking water needs of the Bengaluru city. The equitable allocation has been given priority overriding the demands of Tamil Nadu’s historical rights. This is line with the UN Convention, in which the article 5 on the equitable and reasonable utilization is given preference over the article 7, which talks about ‘obligation not to cause significant harm’.

No doubt, this Supreme Court verdict is a landmark verdict. It clearly rules that the rivers are national assets and no state can claim sole right over it. It also takes into account a comprehensive view of water supply and demand in the basin, in including groundwater in the supply side while giving preference for drinking water needs over irrigation demands. It creates an independent authority to regulate the release of the water in the Cauvery basin. The verdict has however fallen short of providing a permanent solution to the water sharing in the basin as the state-wise allocation is limited to 15 years of time period only. Instead of a fixed quantity in water allocation, it would have been better for the Court to provide a water sharing formula among the 4 states over the available water. This would have given a long-term solution, otherwise parties will start bickering again over their share in another 15 years.  Fixed allocation can be also problematic in case of an unusual drought year, which is not very uncommon these days. Moreover, the global climate change is also feared to cause much more long-term water supply and demand variability in the basin, which might lead to further complications, if there is a fixed allocation of water. It is also silent over the water quality, which has become an issue of concern.

Cauvery River is not the only inter-state water sharing dispute India is facing. The list of this type of dispute is a very long one: Sutlej, Yamuna, Krishna, Bhima, Narmada, Mahi, Sone, Mahadayi and Mahanadi rivers to mention a few. There are many new inter-state water disputes will come up if Narendra Modi government pursues its obsession with river-linking projects, in order to transfer the waters of Himalayan rivers to southern peninsula. Supreme Court has been also goading the central government to do so, and in 2012, it has passed an order to do it in a ‘time bound manner’. By branding the rivers as national assets, now the Supreme Court has paved the way for the forceful implementation of river-linking schemes. Besides adverse environmental and ecological effects, river-linking in a grand scale will be hugely conflictual. Any attempt to carry out the plan from surplus to deficit basins will not only infuriate the existing river sharing disputes in various basins, it will also bring in many new conflicts with the new actors.

The Cauvery verdict will also certainly embolden the upstream states in India to be ‘new user’ in the basin and start using more of the shared waters. A major dispute between Odisha and Chhattisgarh has come up in the last couple of years over the sharing of waters of the Mahanadi River. Downstream state Odisha, which has been using the water historically vehemently opposes upstream Chhattisgarh's on-going construction of series of barrages to utilize larger share of the Mahanadi water in its catchment area. Last month, the Supreme Court has asked for a water tribunal to be constituted to decide the allocation of Mahanadi water between Odisha and Chhattisgarh. The Cauvery verdict, for its preference for the equitable use over the historical use, will not only strengthen the case of Chhattisgarh only, but also will encourage many other upstream ‘new user’ states like Madhya Pradesh, Jharkhand, Himachal Pradesh and Sikkim to actively pursue water development projects in the name of industrial use and drinking water need, creating more riparian disputes and more cases for the Supreme Courts to decide.

Overall, the Supreme Court verdict over the allocation of the Cauvery River water is a significant one as it will possibly bring cessation of a century-old conflict for 15 years. Most importantly, by following the principles of the UN Convention, the Supreme Court has displayed its commitment to internationally recognized water sharing rules and norms. However, while Indian federation does not have a national water law and the present government is very eager to pursue inter-state river water transfer, the verdict might encourage many more new water conflicts to emerge in India. Thus, Supreme Court should remain prepared to deal with more of inter-state river dispute cases in the near future.

The writer is professor of Peace and Conflict Research and UNESCO Chair of International Water Cooperation at Uppsala University, Sweden.