Why The Poor Are More likely To Be Undernourished

The poor are increasingly displaying food preferences for better tasting, flavoured and packaged foods but with low nutritional content. 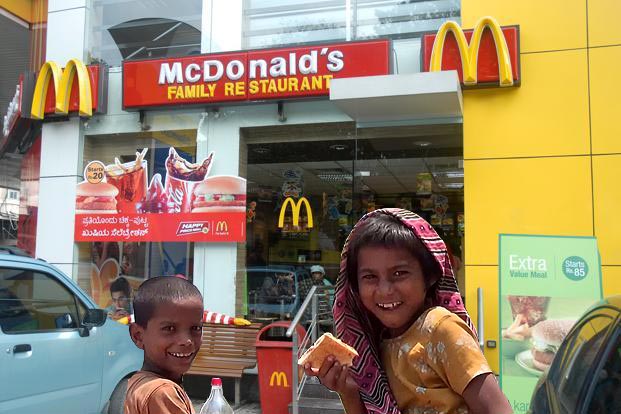 Renewed media hype about counting the number of poor was sparked by the recent release of the Socio-Economic Caste Census. While many analysts found the prevalence of poverty alarmingly high, others debunked the SECC report for its muddled and incoherent view of deprivation.

An important contribution of this report, however, is the emphasis on mutiple dimensions of poverty including low income but also landlessness, unemployment and abysmal quality of housing. While this is undoubtedly laudable, it misses an important dimension of deprivation (i.e. undernourishment or hunger). It matters as it signifies an individual's failure to engage in productive and remunerative activities.

We accordingly examine whether reduction in poverty is associated with reduction in hunger or undernourishment. A specific issue is whether the poor are also hungrier now. From this perspective, we first compare FAO's estimates of hunger for India and our own based on the NSS data, and then examine pervasiveness of hunger, especially among the poor.

FAO's The State of Food Insecurity in the World (SOFI) report is optimistic about halving the proportion of hungry by 2015 (MDG1c). This claim rests on annual but unreliable national food balance sheet data and a flawed method for estimating hunger. Various adjustments for excess variability of food production and losses, and nutrient content of different foods  are used to construct estimates of calorie availability.

Minimum calorie "requirements" or calorie thresholds considered essential for healthy and productive living, and distribution of calories across the population yield estimates of proportion and number of undernourished. Comparisons over 1990-92 and 2014-16 are, however, marred by the fact that a refined method for determining hunger and estimates of food losses were only used from 2012 on. Thus the assessment of progress towards achieving MDG1c without the same methods and adjustments for food losses to the base period estimates (1990-92) is specious. Briefly, apples and oranges are compared.

About 80 percent of the reduction in the number of undernourished is attributed to China and India — especially the former. Our critique shows that not just the progress against hunger but also the prospect of achieving MDG1c are over optimistic, if not misleading.

We illustrate the glaring contradictions between FAO's estimates of hunger and ours based on NSS data on calorie intakes in 1993 and 2011. Additionally, we throw light on whether the proportion of undernourished among the poor has risen and why. The POU between 1993 and 2011 has remained unchanged at just under 50 percent of the total population. As a result of population growth, and contrary to SOFI's estimates, the number of undernourished rose by a hefty 160 million.

Although economic growth has been moderate and poverty has (nearly) halved, it is worrying that undernourishment remains so pervasive, especially among the poor.

Daily calorie intake per capita fell from 2136 to 2089 over the period 1993-2011, and food composition changes are associated with this decine. Cereals are the main source of calories but their share has declined. Other  less important sources — those of milk and milk products, and vegetable oil — rose slightly while those of sugar and vegetables remained unchanged. There is a caveat, however, that sugar intake is generally underestimated as sugar content of beverages is underestimated.

Calorie intake depends on food composition. Whether more cereals, vegetables, milk or poultry products  are consumed depends on the interplay of income, food prices and tastes or preferences for "variety". Calorie intake rises with income. Monthly per capita expenditure rose but moderately. Relative food price effects matter too, as households make substitutions for cheaper sources of calories. If, for example, cereal prices rise faster than vegetable oil and sugar prices,  the latter will substitute for the former.

Available evidence also suggests that the poor are more responsive to changes in (relative) food prices. Over the period 1993-2011, cereal prices rose faster than those of vanaspati oil and sugar, so the substitutions between them are likely to lower calorie intake. Other substitutions between pulses, whose price rose most rapidly, and other food commodities futher lowered calorie (and protein) intakes.

Attention has been drawn to a dietary transition characterised by a switch from cereal-based diets to dairy products, vegetables, poultry and fried food. This switch also entails a strong preference for processed foods, their packaging and flavours. These preferences are subsumed under a "taste for variety". Following urban areas, diet diversification has spread to rural areas and to low income households amid growing affluence.

Supermarkets as well as fast food chains have a pivotal role in this change. Diets have become more "Westernised"  and there is stronger preference for tastier forms of food (e.g. better flavoured fast foods for healthier home cooked variety). In fact, even poor consumers are increasingly relying on more expensive sources of calories (the cost of 1000Kcal has tripled over 1993-2011).

Notwithstanding the recent and ongoing hullaballoo over Maggi & Knorr noodles, pastas, sauces, and beverages, there is general agreement that a wider range of foods is now available, standards of hygiene are better and there is greater adherence to food safety standards. Yet, there is scant evidence on nutritional effects of more diversified diets.

The debate on how to promote healthy diets without risking overnutrition remains inconclusive. Higher incomes will help overcome to some extent the scourges of poverty and undernourishment. However, food choices are driven not just by income and food prices but also by a growing taste for variety.

While raising awareness of healthy diets is desirable, it is unlikely that food labelling and stringent food safety standards can offset evolving food preferences for better tasting, flavoured and packaged foods but with low nutritional content. That the poor themselves increasingly display such preferences is not intriguing but a daunting policy challenge.

The Left Is Dying, Long Live The Left