Colombo is also turning to New Delhi for help at this critical juncture. It is negotiating a $1.9 billion economic aid package, but it has not yet been finalised. 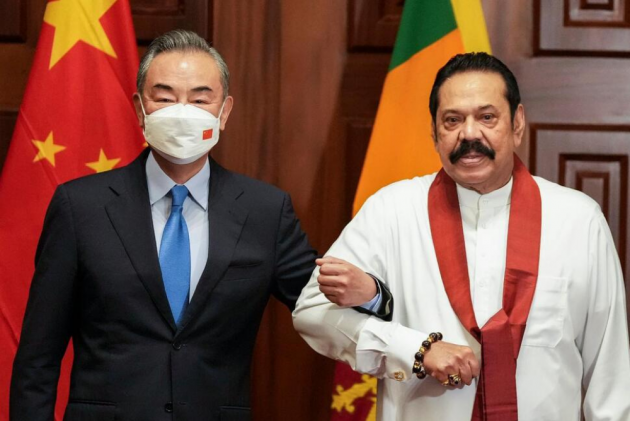 China’s foreign minister Wang Yi was in Sri Lanka on a two-day visit at a time when the island nation is facing acute economic distress. The crisis, triggered by dwindling foreign exchange reserves has led to soaring prices, acute shortages and long queues in front of provision stores. The tough economic situation has battered the image of the all-powerful ruling Rajapaksa family.

Wang’s visit is to mark 65-years of diplomatic ties between China and Sri Lanka. The friendship between China and Sri Lanka was sealed soon after Independence when the two countries signed the rubber for rice pact in 1952. At that time, China was under UN sanctions for supporting North Korean aggression on South Korea. Member countries of the UN were asked not to trade with China. Sri Lanka broke ranks and signed the rice for rubber pact. That was the start of the friendship.

The Rajapaksa’s have excellent ties with China. In fact, during Mahinda Rajapaksa’s second term as President, he played the China card effectively against India. However much has since that time with both Delhi and Colombo going out of their way to repair frayed ties.

Battleground Maldives: The Key To Indo-Chinese Strategic Control Over The Indian Ocean

EXPLAINER | Will China Invade Taiwan In 2022?

President Gotabaya Rajapaksa is hoping that China will come to its aid and infuse much-needed funds into Sri Lanka’s sagging economy. During his meeting with the visiting Chinese foreign minister, President Gotabaya asked for the restructuring of the payment schedule of the enormous debt that the island state owes to China. "The President pointed out that it would be a great relief if debt payments could be rescheduled in view of the economic crisis following the pandemic," Rajapaksa's office said in a statement, after his conversation with the visiting dignitary. The President also asked for a concessional trade-credit scheme. This could help import key ingredients from China needed for industries to operate smoothly. Both Gotabaya and brother Mahinda wanted to encourage tourists from China as soon as the pandemic allowed. Sri Lanka earns a major chunk of foreign exchange from tourism which has come to a near standstill during the pandemic. Whether Wang agreed to the President’s request for rescheduling debt repayment and other requests from the Sri Lankan side is not known. China did help out earlier. In December, Sri Lanka did a $1.5 billion currency swap with China to help boost Colombo’s dwindling forex reserves.

China is Sri Lanka’s biggest bilateral lender but its infrastructure development projects have led to much controversy. Sri Lanka had to give over the Chinese built Hambantota port in southern Sri Lanka on a 99-year lease to China in 2017, as it could not make the debt repayment in time. The debt-to-equity swap has been much criticised. This incident has been flagged by the US, its Western allies as well as India as an example of "debt-trap" that accompanies Chinese investments across the world. Critics of President Xi Jinping’s Belt and Road Initiative say that China is luring poor countries in Africa and South Asia with its chequebook diplomacy, but burden them with huge debts which eventually lands the country receiving funds into an economic black hole. The West believes that Chinese terms of lending are not transparent.

Colombo’s hopes for some big-ticket announcements have not yet materialised. Ahead of Wang’s visit, Sri Lanka’s ambassador to China Palitha Kohona was quoted by the local press as saying that a number of major projects are under discussion though he gave no details. Kohona went on to say that several large Chinese financial companies are interested in investing in Colombo Port City. The $1.4 billion Chinese developed Port City project was aimed at turning Colombo into a financial hub. But investments have not come in from international players yet. The pandemic has been a major bane, but besides that, the US and western financial companies have largely ignored it perhaps because of the current tense ties between China and the US. Indian companies too have not shown interest.

Colombo is also turning to New Delhi for help at this critical juncture. It is negotiating a $1.9 billion economic aid package, but it has not yet been finalised. On January 6, India and Sri Lanka signed a deal to jointly develop the Trincomalee oil tank farm in eastern Sri Lanka. These 75 oil tanks which were used by the British during the Second World War, will be now redesigned and modernized. "Energy cooperation is an important area of bilateral cooperation with Sri Lanka. We are in consultation with the government of Sri Lanka for the modernization of the Trincomalee tank farms. This will allow for storage of fuel and will augment bilateral energy security,’’ MEA spokesman Arindam Bagchi said on Thursday. Ironically, at one point of time in the 80’s New Delhi was concerned that the US was eyeing these oil tanks and planning to have a listening post in Trincomalee. That was the time of the Cold War with India and the US on the opposite side of the divide.

China’s Global Times, quoting its news agency Xinhua from Colombo said on Monday that during his meeting with President Gotabaya Rajapaksa, foreign minister Wang Yi had  talked of reviving discussions on a Free Trade Agreement between the two countries. Wang was quoted as saying that the two countries should tap opportunities provided by the Regional Comprehensive Economic Partnership (RCEP) agreement to work on a FTA. `` Wang said the Colombo Port City and Hambantota Port projects could be engines for pushing forward bilateral cooperation,’’ the Global Times said. India had opted out of the RCEP.