All India Kisan Sabha (AIKS) leader P Krishna Prasad told Outlook that the ‘Mahapanchayat will usher in the second phase of the farmers' protests, which will be organized in other parts of the country also. 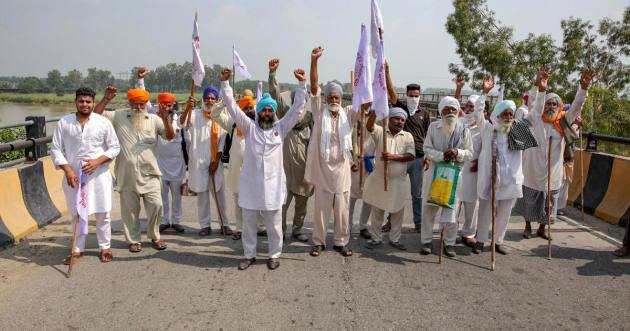 Will Farmers' Muzaffarnagar meet change political equations In UP Polls?
Just a few months away from Assembly elections, the political landscape in the most populous state of Uttar Pradesh is heating up with the ongoing farmers’ protests shifting its focus to the state.

A Mahapanchayat, convened by Sanyukt Kisan Morcha’s (SKM), an umbrella body of farmer’s union is slated to inaugurate ‘Mission Uttar Pradesh’ in Muzzafarnagar on Sunday. Though the organizers are distancing themselves from any political campaigning, the protests are expected to set the agenda for Uttar Pradesh, which accounts for the highest number of assembly seats in the country. It has 403 assembly constituencies. With 80 seats, UP also sends the highest number of Parliamentarians to the 543-seats Lok Sabha.

Sudhir Panwar, former member of UP Planning Commission and a farmer leader from Shamli (which was once under Muzaffarnagar district), says there is considerable excitement over the Mahapanchayat. By Saturday afternoon over 30,000 people had assembled at the mahapanchayat venue.

“What is important about the event is that it is self-propelled and not area defined as there is going to be wide participation from people not just within the state but also from other states,” says Panwar, who is looking forward to interactions with other farm leaders at the venue.

Farmer leaders are happy that ahead of the Mahapanchayat, which is part of the ‘Mission UP’ framed with an eye on influencing a political leadership change in the state assembly elections to be held in February next year, the UP government held a sugarcane pricing committee meeting earlier this week.

Last year the state pricing panel for sugarcane had met in February, five months after the start of the harvest in October. There are expectations that the rising protest momentum may help sugarcane farmers get their arrears and better price for their crop keeping in view the higher input costs.

The selection of the venue, according to Panwar, is apt as Muzaffarnagar is known as a ‘rebellious’ area in elections, springing surprises. The timing of the mahapanchayat is also crucial as it is ahead of the harvest season and at a time of high inflation and high unemployment due to many sectors still to recover from the impact of Covid led restrictions.

Thousands of farmers have been protesting more than over nine months against three contentious farm laws passed by the Parliament in September 2020. The organizers of SKM said that the Mahapanchayat at Muzzafarnagar will be one of the largest peasant gatherings in the country.

All India Kisan Sabha (AIKS) leader P Krishna Prasad told Outlook that the ‘Mahapanchayat will usher in the second phase of the farmers' protests, which will be organized in other parts of the country also.

“We are going to inaugurate Mission Uttar Pradesh, Mission Uttarakhand, and Mission Punjab during the Mahapanchayat. We want to make the protests a pan-India one,” he said.
The choice of the venue of the Mahapanchayat is also significant as the district has witnessed one of the worst communal riots in 2013. The riots which shattered decades- old ties between Muslims and Jats in the region also left 60 people dead and rendered more than 50,000 homeless.

However, with the farmers’ agitation taking center stage in the region now, many observers say that there is a revival of bonding between and Muslims and Jats in the region.
Krishnaprasad says that the Mahapanchayat is not a political project and it’s a mass movement against communal polarization. The maha panchayat will see lakhs of participants from across the country with the majority coming from Punjab, Haryana, UP, and Uttarakhand, he says.

“Muzaffarnagar riots divided the working class and the peasantry on a religious and communal basis, which helped the BJP to come to power. With the Mahapanchayat, we are sending out a symbol of unity of the working class against communal division. The protest is also to advance their struggle for basic minimum support price and minimum wage,” he said..

Political observers say that the bonhomie between the Jat farmers and Muslims will pose a political challenge for the ruling BJP in its strongholds on western UP.

However, Uttar Pradesh BJP spokesperson Harish Chandra Srivastava told Outlook that the farmers’ protests are politically motivated and it wouldn’t impact the prospects of the party in the upcoming elections. Srivastava added that in UP, farmers are not allied with the protestors as they are not in distress. A record quantity of 56.41 lakh metric tonnes of wheat was procured from farmers at Minimum Support Price (MSP) in the state, he said.

“The farmer protests are politically motivated and they are doing it with the election in mind. The protesting farmers are spinning false narratives and most of the farmers are not allied with them. In UP, there was a record-buying of wheat in MSP price this year. During Akhilesh’s rule, it was only 8 lakhs Metric tonnes. We have procured 56 lakh metric tonnes. The public is well aware of the government’s achievements,” he said..

Srivastava added that the state government has cleared more than Rs 1.42 lakh crore as cane dues of the farmers. Last week, chief minister Yogi Adityanath has announced that the government will increase the purchase price of sugarcane next month.

In an effort to reach out, the party’s Kisan Morcha has been holding meetings with farmers in various constituencies, said another BJP leader. He said that though the party’s performance in Western UP was not so inspiring in recent panchayat polls, it has launched farmer outreach programs to mobilize support. “We have held ‘Kisan panchayat in Meerut last week. Our leaders are holding meetings with farmers in district and panchayat levels,” he said.

Srivastava also said that the BJP is not worried by farmer leaders’ call of ‘Mission UP’ or the coming together of Rashtriya Lok Dal (RLD) and Samajwadi Party (SP).
“Congress and SP came together in the 2017 Assembly polls. In Western UP, their calculation went wrong in 2019, SP and BSP came together and they hoped for a consolidation. Earlier also Ajit Singh tied up with the SP. There will be no impact this time also,” he said.

In view of the large farmer gathering, the UP police have arranged elaborate security arrangements in and around Muzaffarnagar.