Will Iran Allow Women To Watch Football Matches In Stadiums? Here's What FIFA Boss Gianni Infantino Was Told By The Regime 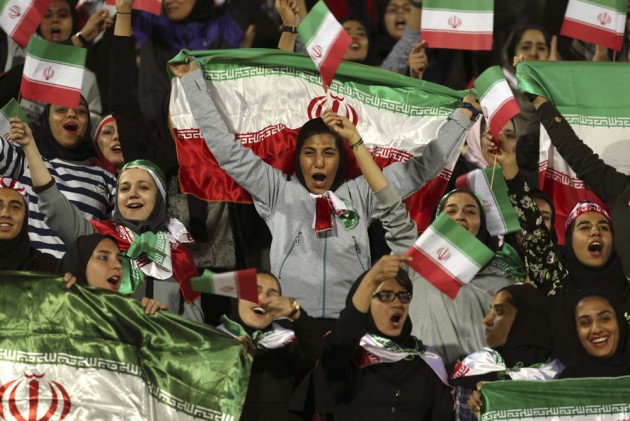 FIFA president Gianni Infantino said Sunday that world football's governing body has been "assured" by Iranian authorities that women will be able to attend a World Cup qualifier in Tehran next month.

FIFA had demanded Iran allow women free unlimited access to stadiums following the 'Blue girl' incident where a woman killed herself after being arrested trying to access a football stadium.

"We have been assured, that as of the next international game of Iran, women will be allowed to enter football stadiums," Infantino told a FIFA conference on women's football in Milan on Sunday.

"We need to have women attending, we need to push for that with respect but in a strong and forceful way and we cannot wait anymore," Infantino added.

"This is something very important, it is 40 years that this has not happened, with a couple of exceptions, but it is important to move to the next level and to the next stage."

The Islamic republic has barred female spectators from football and other stadiums since 1981, with clerics arguing they must be protected from the masculine atmosphere and sight of semi-clad men.

FIFA officials have been in Iran to discus preparations for the October 10 World Cup qualifier against Cambodia, their first home game of the 2022 qualifying competition.

Sahar Khodayari, dubbed "blue girl" because of the colours of the team she supported, Esteghlal FC, was reportedly detained last year when trying to enter a stadium dressed as a man to watch them.

She died of her injuries in a Tehran hospital after setting herself on fire outside a court in early September.

The death of Khodayari sparked an outcry online, with many calling on FIFA to ban Iran from international competitions and for fans to boycott matches.

"I think it's huge, that FIFA has enough of a pull and ability to influence change," two-time US women's World Cup-winning coach Jill Ellis said on the sidelines of the Milan conference.

"It's absolutely right, I don't think there should be any discrimination, period. And not to allow women attend matches, I can't even wrap my brain around it," added Ellis.