Will Never Be Showpiece To Win Elections, Never Lie To People For Coming To Power: Sidhu

Sidhu said while responding to a question from whom on whether he would be named as the chief minister by the Congress if it wins the 2022 Punjab Assembly polls. 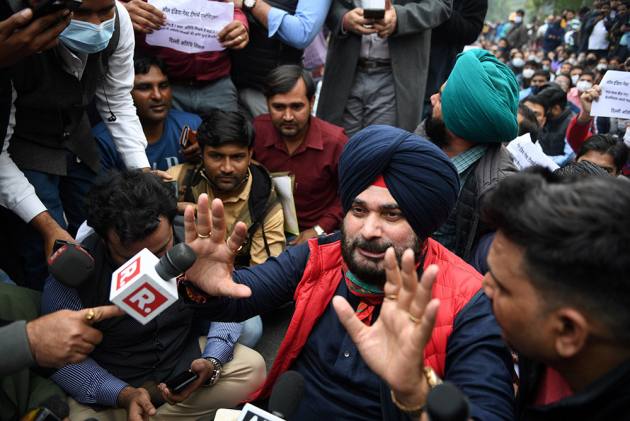 On Sunday, Punjab Congress chief Navjot Singh Sidhu said he will never be a showpiece to win elections and never lie to the people of the state for coming to power.

The cricketer-turned-politician said he had never asked for any position from anyone in his life but always wanted Punjab's welfare. "Neither have I demanded anything in life nor will I ever do so. I have never even asked people for votes," Sidhu said while responding to a question from whom on whether he would be named as the chief minister by the Congress if it wins the 2022 Punjab Assembly polls. He was speaking at a public discussion programme --"Bolda Punjab"-- here.

"Responsibility either makes you better or bitter. I have a bitter experience. I had a role in making three governments in Punjab. I was campaigning. But in this system, a good man is made a showpiece. He is only kept for winning elections. I will never be a showpiece.... I will also never lie to the people of Punjab for coming to power. Can anyone say that I have ever lied? Because I have nothing to lose," Sidhu said.

Referring to his stint in the BJP before joining the Congress, he said he left a Rajya Sabha seat, was asked to contest elections from Kurukshetra and was also offered the post of Union Information and Broadcasting Minister. "Then I was told that you become a face (of the Congress) in Delhi and was also told that I would be made a (party) general secretary by (late Congress leader) Ahmed Patel. I told him that had I wanted to become a (party) face in Delhi, I would have been a three-time minister in the BJP," Sidhu said.

He further said he was committed to Congress leaders Rahul Gandhi and Priyanka Gandhi Vadra. "I am committed to two people. I have seen them from very close and I have complete trust that they are good people and are not fake -- Priyanka Gandhi Vadra and Rahul Gandhi. "I gave my word to them and will stand by it. But I also stand by my words for the welfare of the people of Punjab, not for bringing anyone to power," the state Congress chief said. He asserted that he will perform whatever duty is given to him by the party but will never deceive the people of Punjab.