In a Facebook post, Lt Col Ahlawat called Khanna's idea of auctioning the costume "as sick as your funnybones jokes/book/blog". 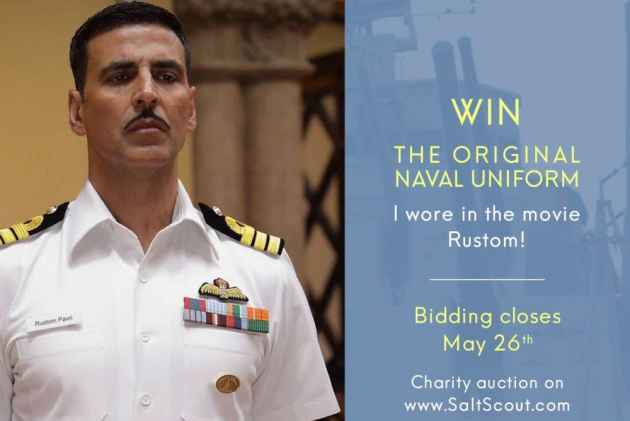 Twinkle Khanna today responded to a message by an Indian Navy officer, who warned her against auctioning a costume piece worn by her husband Akshay Kumar in the film, "Rustom", saying she "will not retaliate with violent threats but by taking legal action".

The author-producer had recently supported Akshay's announcement to sell off the "actual naval uniform" he donned in the 2016 film, which was loosely based on the 1959 Nanavati murder case.

Khanna received a lot of flak on social media for backing the sale, the proceeds from which would go to "the cause of animal rescue and welfare".

The original message, by Lt Col Sandeep Ahlawat, was shared by senior journalist Sandeep Unnithan on Twitter, who claimed the author was "one of the finest men in uniform" known to him.

In a Facebook post, Lt Col Ahlawat called Khanna's idea of auctioning the costume "as sick as your funnybones jokes/book/blog".

He wrote what Akshay wore in the film, as Commander Rustom Pavri for which he won his maiden National Film Award for best actor, was "a costume and not uniform".

"Indian Armed Forces wives (Army, Navy, Airforce) do not auction their husbands uniforms. Uniform is not a piece of cloth that a producer hands over to cinestars for enacting roles and make some quick bucks.

"The permission to wear the uniform comes from the office of the President of India. Uniform is earned with your blood, toil and sweat which is placed on the mortal remains of a soldier along with the tricolour," he added.

Lt Col Ahlawat warned Khanna that he will "drag you to the court" if she even made "a feeble attempt to auction this piece of costume in the garb of 'UNIFORM'."

"You touch our honour and we will give you a bloody nose," he added.

Khanna replied to Unnithan's tweet, questioning whether it was plausible to "to threaten a woman with bodily harm for trying to raise funds for a charity".

"As a society do we really think it's all right to threaten a woman with bodily harm for trying to raise funds for a charity by auctioning a uniform used in a movie, a piece of film memorabilia? I will not retaliate with violent threats but by taking legal action! #JaiHind," she wrote.