Will The Real Sunny Deol Please Stand Up?

It never was just about his looks, dialogues, mannerisms, songs or fights; but the persona in totality. The dhaai kilo ka haath, Balwant Rai ke kutte and ik mod aaya were only incidental... 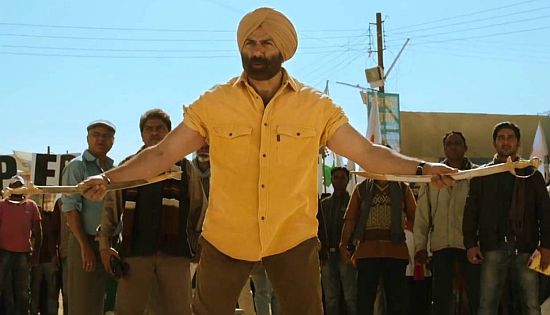 Not that he had any options. He was the son of the original He Man of Hindi Cinema. Besides, his contemporaries were Kumar Gaurav, Jackie Shroff, Anil Kapoor and Sanjay Dutt, and all of them had clearly defined profiles. Gaurav was the chocolate hero, Shroff was the rugged Mr. Goodlooking, Kapoor was the actor experimenting with his roles, and Dutt was the junkie non-actor. So the only choice baby Sunny had was to plunge into the cauldron full of magic potion and follow it up with his fariyaad, lots of it. And follow up he did in style. From Arjun to Dacait, from Border to Indian, from Zor to Ziddi and from Jo Bole So Nihal to Gadar. And everything else in between. Barring the Rajkumar Santoshi trilogy of Ghayal-Ghatak-Damini to some extent, Deol’s pulsating pectoral pictorials have been these mammoth exhalations of brute, brawn and brooding, meant essentially for the front benchers. And I say this as a very good thing.

With his Herculean abilities— physically speaking, that is— the scion of the Deol dynasty could actually achieve something truly Herculean in Bollywood. He carved a niche for himself with no dancing skills and limited acting expertise against the likes of Jeetendra, Mithun and Govinda in the 1980s. He competed with other action heroes like Ajay Devgan, Akshay Kumar and Sunil Shetty, and the Khan triumvirate, and still could create box office frenzy in the 1990s. And he gave the biggest hit of his career, Gadar, against everybody else in the industry in the early 2000s. All this, and more, through just the regular revisits of his grouse-grumble-groan formula again, and yet again. This was Ajay Singh Deol’s personal Bollywood, backed by three key directors, Rahul Rawail, Rajkumar Santoshi and Anil Sharma. The dhaai kilo ka haath, Balwant Rai ke kutte and ik mod aaya were incidental to his growth. Because it never was just about his looks, dialogues, mannerisms, songs or fights; but the Sunny Deol persona in totality. The entire career of Deol can be summed up as the longest running episode of MTV Roadies, complete with incessant machismo, chronic impetuousness and persistent chaos. And Punjab. Lots of it.

It was only in the latter half of the 2000s that the Deol magic started to diminish with duds like Naksha, Big Brother, Fox, Khuda Kasam or Teesri Aankh. His true fans, of course, would refuse to admit even now that Sunny Deol has not given a hit of Sunny Deol proportions in ages. They would still make the rounds of the cinema halls to count his muscles and uncount his expressions. Hell, they would insist that the real Ironman to deserve the largest statue in the world is Sunny Deol. But his hardcore fans would not count Apne and Yamla Pagla Deewana as Sunny Deol films either.

They miss the man who was their hero.

Back to what we started off with. I saw Singh Saab The Great. It was embarrassing to see Sunny Deol as a caricature of Sunny Deol, battling a rotund Prakash Raj with those trademark swish-swish Madras-remake moves. And the suspension of my disbelief collapsed gloomily. What I saw was a man in his 50s, trying to hold on to the vestiges of the past, and losing it all in the process. The angst was redundant. The anger was ill-placed. In one of the scenes from Singh Saab The Great, a kid asks Sunny, “Tuhaadi chaddi kitthe hai?”, referring, of course, to him as Superman. And this, specifically, is what has been Sunny Deol’s biggest failing in recent times.

In the heart of their hearts, his audiences never saw him as Superman. From Arjun to Kashi to Tara Singh, we saw his vulnerable side and we empathised with him. We associated with his helplessness against Katya in Ghatak, we understood his resentment for Chadha in Damini, we grieved over his love for Sakeena in Gadar. Because he was one of us. Louder, yes. More muscular, certainly. Guttural, absolutely. But real. And honest. This Anna Hazare-Bajirao Singham-Tara Singh mishmash called Saranjeet Singh seemed from some distant land. Singh Saab The Great isn’t one of us. He surely isn’t the Sunny Deol we know. Precisely why Singh Saab and his box office performance gather not our gentle empathy, but our dim indifference. Sad, because very few actors can get away with ‘The Great’ added to their screen persona.

And Sunny Deol will always be one of them.

Vaibhav Vishal is a Mumbai based Creative Consultant. He has worked with brands like MTV and Red FM for over a decade, but he refuses to take the blame. The views expressed in this article are not his own. He is @ofnosurnamefame on Twitter and writes on www.ofnosurnamefame.com.)