Will You Marry Me?

I've been sweating over popping the question for two years, never mind April, and my girlfriend's patience was wearing pretty thin...

April in Delhi wouldn’t normally bring out the romantic in you. Forget the gulmohars in bloom and the amaltas on the verge of exploding into colour and the becomingly rare-steaky colour of the evening sky; what you’ll remember is the flush of the first hot winds of summer against your face and the threat of heatstroke if you stay out too long in the sun. Flowers wilt by the evening and so do Dilliwalas and only an idiot would propose in this sort of weather. Or so you would think. 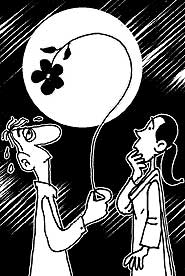 But it so happens that I did get engaged this past week. I’ve been sweating over popping the question for two years, never mind April, and my girlfriend’s patience was wearing pretty thin. Midnight power-cuts elicited the sort of response that you’d expect from a bombed hostile nation, and the thought that an engagement ring might ameliorate her distress—and mine— did cross my mind. But it took the particular lucidity a Delhi traffic jam engenders to make me see the light. You listen to the honking Maruti behind you and you think, you can go over me or under me, but you can’t go around. You look at the chap in the SUV next to you, with his driver in an Admiral’s peaked cap, and you think, nice car. Will it get you home faster? You ponder the separation of church and state as Bush Sr was said to have done when shot down during WWII; you ponder the fact that the issue doesn’t seem to have occurred to his own issue. You think of this and that and time passes in the mellow way it has when you find yourself simultaneously at the mercy of circumstance and beyond irritation.

How hard is it to be married, anyway? How many kids do I want? What will I call them and what do I want them to be when they grow up: editors, engineers, doctors, black-marketeers?

Questions, questions. I think of my girlfriend, waiting for two years for a question that will make her happy and, in the eyes of the people we care for most, make our time together worthwhile. A proposal is, after all, like so many of the things that define our lives, now and in time to come—Did you believe in god? Were you a good person? Coffee or tea?—only a question. A simple joining of four words framed in an enquiry. The answer to which, in truth, I already know. All I have to do is ask.

Questions and issues fall away like cars in my rearview mirror as I finally break free from the jam. A quick stop at my parents’ to warn them not to spill the beans, a sprint to Sunder Nagar to buy a modest ring, a stop in the Lok Nayak Bhavan theka for a bottle of champagne, then home for Sam Cooke on the stereo and a shower before she comes home. Then up on the terrace, champagne in the bucket and the lights on in Humayun’s tomb, and a question asked to which, as with all the big questions, I already know the answer.