Willing To Wound But Afraid To Strike?

Has Akhilesh lost an opportunity to break away from the party’s old guard and power brokers? The jury is still out as the drama heads to a denouement 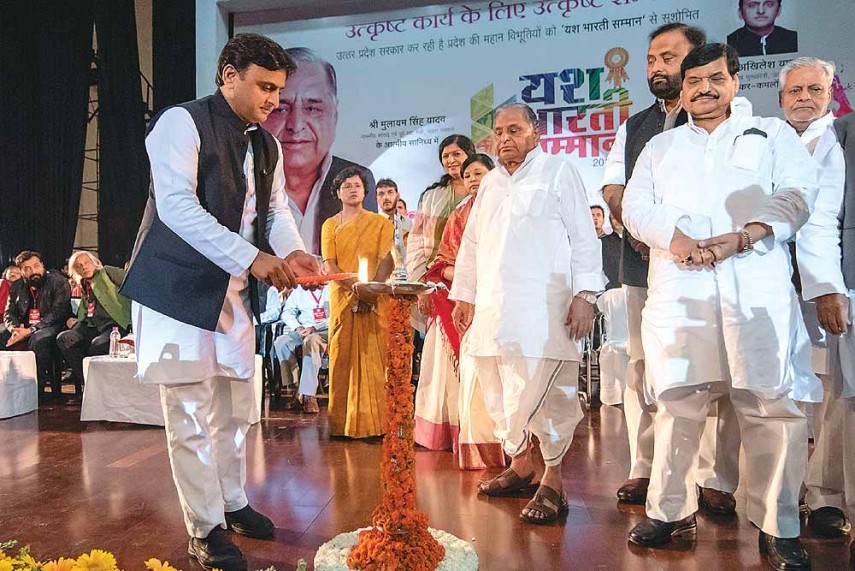 Is Akhilesh Yadav taking two steps forward and taking one back? The question would have crossed the mind of several political observers on Monday. Following an ugly exhibition of acrimony in the morning at the Samajwadi Party office and a shouting match between father and son, the Uttar Pradesh chief minister and party chief Mulayam Singh Yadav retired hurt for a closed-door meeting, at the end of which the CM retreated to his official residence, refusing to meet the 150 odd party MLAs who had assembled there. This was in sharp contrast to Sunday when he had addressed 200 party MLAs and declared that there was no place in his ministry of people who happened to be close to Amar Singh, the Rajya Sabha MP and party general secretary.

On Sunday it seemed like he was ready to strike it alone and dump the old guard but on Monday afternoon there was fresh confusion over his future course. At the party office he had cried, became emotional and had declared that he would have resigned if his father had called upon him to step down. He also debunked speculation that he was about to float a new political party. For good measure Mulayam Singh Yadav told his son that he would not hear anything against Amar Singh or Shivpal Yadav, both of whom are at loggerheads with Akhilesh.

On Sunday the party appeared to be heading for a split. And the consensus was that Akhilesh Yadav, if he could indeed get rid of the baggage and contest the election on his own, would do rather well. But his diffidence on Monday put paid to all such speculation. He had no plans to quit, no plan to split and no plan to challenge the leadership of ‘Netaji’, his father, his camp suggested. What then was Sunday’s defiance all about?

For the first few years after being sworn in as CM in 2012, it was said to be his father who was doing back-seat driving and running the Government. Even the choice of senior officials including the principal secretary to the chief minister, the chief secretary and the Director General of Police were said to be dictated by Mulayam Singh Yadav. His government came in for severe criticism for ‘Yadavisation’ of police stations in the state. Failure to curb lawlessness and prevent the Muzaffarnagar riots were considered major blots. But as he found his feet and gained in confidence, Akhilesh Yadav began asserting himself and with the next assembly election barely three months away, he seemed to be getting ready for ‘exam time’.

The rift between the father and son is too wide to be bridged, it would seem. While Akhilesh Yadav does not think much of his uncle Shivpal Yadav, MSY declared on Monday that Shivpal was a mass leader. While Akhilesh Yadav frowns upon dons like Mukhtar Ansari, his father asserted on Monday that Ansari was from a respectable family. And while the CM considers Amar Singh as a power-broker and outsider, his father makes no bones about the fact that the Rajya Sabha member is ‘family’.

That is why it’s not clear how Akhilesh Yadav can gain politically by choosing to continue as a lame-duck CM, a prisoner of the same brokers he had defied and dared even a day earlier. Only time will tell if the uneasy truce will last even as people continue to be puzzled by the following questions.

What was the fuss all about?

Despite charges flung by all sides, it is not clear whether the differences were political in nature, over administrative control or whether it was simply an emotional response from both sides to allegedly being taken for granted. Akhilesh Yadav complained of interference by outsiders. On the other hand, uncle Shivpal Yadav and father Mulayam Singh Yadav accused him of encouraging unruly youth and surrounding himself with sycophants. They also accused him of not tolerating criticism.

So, where does Amar Singh stand?

On Sunday, Akhilesh Yadav told MLAs that he would not allow people close to Amar Singh, the party general secretary and Rajya Sabha MP, in his cabinet. He was opposed to the re-entry of Amar Singh in the party after the latter was expelled in 2010. On Monday, Mulayam Singh Yadav, in his address to party workers clarified that Amar Singh was like a brother to him, that Singh had stood by him during his bad days , that ‘all of Amar Singh’s sins’ were forgiven and that it was Amar Singh who had stood between him and prison. That still does not answer what riled the UP CM so much that on Sunday he sacked his uncle and state president of the party Shivpal Yadav from his cabinet.

Is the Samajwadi Party heading for a split?

At Monday’s meeting Shivpal Yadav claimed that Akhilesh Yadav planned to float a party of his own and contest the election with new allies. This was denied by the chief minister who said that he had no plan to leave the party; his uncle however defiantly claimed that he himself was told by Akhilesh of his plan to float a party. Mulayam Singh Yadav in his address declared that the chief minister was ‘lying’ without elaborating on it. At the moment, therefore, there is no clear signal of who is lying. Even if the party does not split formally, the ugly clashes in Lucknow would indicate that the party is not united and this may adversely affect its chances in the assembly election.

Is Mulayam Singh the loser?

The Samajwadi Party founder has clearly failed to settle the issue of his political successor. In a poor state of health, the 77 year old leader seems to be vacillating between his brother, cousin and two sons. To an outsider, the claim of Akhilesh Yadav to control the party after Mulayam would appear to be the strongest. He has age on his side, has gained valuable administrative experience, has a clean image and is gaining acceptance among people. But by his failure to stand by Akhilesh Yadav, the party chief appears to have created more uncertainty and left the door open for other claimants to pull the party in different directions.