Winners And Losers In The AAP Saga

A dissection of the death of an idea that played out on primetime TV. 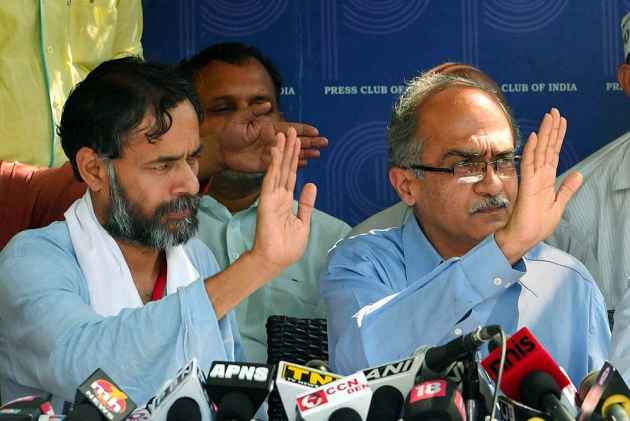 What does one make of the antics of the Aam Admi Party leader leaders who had television channels in thrall last week? Well, those who live by television die by television. Night after night, the viewer saw on TV the slow, bruising death of an idea that once spelt hope. The viewer was not spared the minutiae of the clash of its leaders.

On one side was the man in whose name the 2015 Delhi Assembly elections were fought, its outcome dubbed historic. Arvind Kejriwal, the RTI activist and the leader of the AAP party, appeared impetuous. Then there were the dissidents — activist lawyer Prashant Bhushan and Yogendra Yadav the political scientist who represented sobriety and sanity in public discourse. They were joined by two professors Anand Kumar and Ajit Kumar Jha.

Was this a clash of egos or competing ambition? Or was this a clash of irreconcilable strategies? AAP was described as a platform for fellow travellers on a journey to change the political landscape — was it turning into a party where one man's writ was to be accepted without quibble?

What one saw on television was the sad spectacle of friends and fellow travellers shrieking betrayal before cameras. What one also saw were allegations and stings and taped conversations and mind-numbing press conferences. Was there something else the media had not picked on? What if, it had been a Rakhi Birla who had dissented and not Prashant Bhushan or Yogendra Yadav? Would the media have responded in the manner they did?

There is no denying that Arvind Kejriwal, Prashant Bhushan and Yogendra Yadav had come to represent credibility and earnestness, both on display from the manner in which they spoke when the party made its first public debut in the December 2013 elections. It was hard to misread their intentions. If Kejriwal mesmerised crowds with his homespun logic, Bhushan emerged as a giant slayer who took on the powerful in the courts. Every scam, be it the 2-G, Commonwealth Games, the Radia tapes—Bhushan was fighting them and Kejriwal missed no opportunity highlighting them. Yadav, who joined the duo much later, was the political strategist, who neither lost his calm nor failed to keep his score on electoral fortunes on television.

Two years ago, in a cover story in the Caravan magazine, Bhushan had described Kejriwal's efforts to work on the Lokpal Bill thus: "Basically he (Kejriwal) was doing all the work. I was being only consulted, so it was an easy task, and he gets it quickly." Yet, the recent fight between them showed how far the duo had come from those heady days of idealism. Kejriwal had become the leader in a democratic exercise where people had voted for him in the February elections, in the process, forever changing the equation between him and Bhushan and Yadav.

Much has been written about the ouster of Bhushan and Yadav from key positions of the party, namely the political affairs committee and the national executive. Both Bhushan and Yadav have maintained there was no room for dissent in the party, yet there are many members in the party who maintain that it was a difference in strategies between them that was hard to bridge.

And just as as victory in elections can galvanise parties into action, defeat can demoralise even the most optimistic of the lot. So it was with AAP after the 2014 elections where the party projected to do well had to contend with four seats in Punjab. In Delhi, with a vote share of 32 per cent, AAP had reasons to hope Arvind Kejiwal wanted his party to fight for a seat in the Capital. A symbolic victory in the Capital would ensure a longer lease for the fledgling party fighting to survive.

While Yadav, who had worked hard to build the organisation in Haryana wanted AAP to contest from the state, Kejriwal and others feared a drubbing in Haryana would adversely affect the party's fortunes in Delhi. When the move to fight in Haryana and in other states was put to vote in the National Executive meet of AAP last year, those in favour of fighting for Delhi alone were in a majority.

Yet, from here it was obvious that differences became the reasons for distrust. Letter and mails regularly found their way into the media highlighting problems within the party. It was obvious that Yadav was having problems with what he perceived as over-centralistation of AAP. The party had committed itself to swaraj and decentralistion, yet it appeared that matters were decided by a handful of people from Delhi. A correspondence in May last year between Yadav who had recently resigned from the Political Affairs Committee of the party, and Kejriwal's trusted deputy Manish Sisodia, revealed the extent of differences in perception.

While raising the points of decentralisation and efficient organisation of the party, Yadav also wrote, "Love and affection for a leader often turns into a personality cult that can damage an organisation and the leader himself. This is what appears to be happening to our Party. Major decisions of the party appear to, and indeed do, reflect the wishes of one person."

Sisodia shot back. "It is surprising to read this allegation in your email because Arvind has always supported you. Indeed, so long he was listening to you, you were full of praise for him. For example, your decision to contest from Gurgaon was opposed by many members of PAC. But Arvind not only supported you, he got everybody on board on your candidature. Arvind was democratic then. Even before that, when you wanted to be in-charge of Haryana and the party's chief ministerial candidate, several PAC members opposed it. Even then, Arvind had supported you, and in your eyes Arvind was democratic," he wrote.

It was evident that the former friends were heading towards a split. Shanti Bhsuhan, Prashant Bhushan's father was openly criticising Kejriwal and endorsing the BJP chief ministerial candidate. "As head of the disciplinary committee, we felt Prashant should have spoken out, sadly he kept quiet, only fuelling the disquiet in the party," said sources in the party. Both Yadav and Bhushan decided to opt out of campaigning for Delhi elections. It is not too hard to understand why the new crop of debutantes around Kejriwal think the victory in Delhi was largely due to the efforts of volunteers and the party's mascot Arvind Kejriwal.

Was there any way all of this could have been avoided? The easiest way is of course to communicate and talk but from the way things unraveled, distrust prevented the leaders from communicating directly with each other. A senior leader admitted that Kejriwal could have talked to Bhushan but didn't. Yadav says he is too bruised by the experience. "This will take a long time to heal," he says.

In ousting one's own, Kejriwal too would have realised the power of the media. The very media that had coveted him, now casts him in the role of the main villain in the recent AAP saga. Members continue to be removed from the party. In the battle of perceptions, Kejriwal is the loser, though in his party he is now unquestionably the leader.