Winter Of Our Discontent

Haider is at once the strongest and weakest of Vishal Bhardwaj’s Shakespeare adaptations. It doesn’t help illuminate Hamlet for us, but it does serve to shed some light over Kashmir. 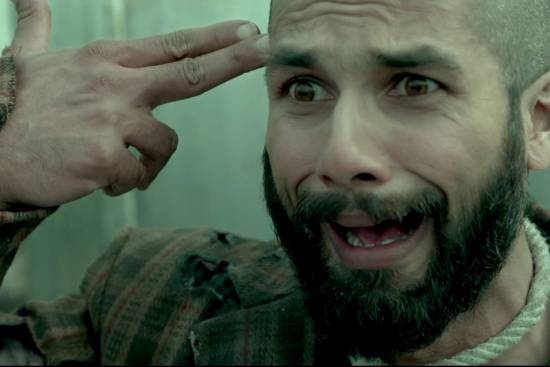 Haider is at once the strongest and weakest of Vishal Bhardwaj’s Shakespeare adaptations: most of the film has little to do with Hamlet, except in the loosest sense, and focuses on the efforts of one Kashmiri Muslim youth (Shahid Kapoor, the Haider of the film’s title) to find his father Dr Hilal (Narendra Jha), who has joined the ranks of the disappeared after he secretly treats a militant leader in his home, even as Haider’s mother Ghazala (Tabu) draws closer to her brother-in-law Khurram (Kay Kay Menon) in the wake of the tragedy. Paradoxically, these are in fact the strongest portions of the film, which is perhaps the only popular Indian film “on Kashmir” to be made for adults. Freed of the need to draw cartoon characters (the Good Kashmiri Muslim oppressed by the state; or the Good Indian Army Officers protecting the state from evil jihadis), writers Basharat Peer and Bhardwaj give us human ambiguity. It would have been easy to have Dr. Hilal treat the militant because of his devotion to the Hippocratic oath— but the doctor is coy about his political sympathies (even to his wife), and it is entirely possible that he is a sympathizer; his son Haider is more openly hostile (and nor is this a function simply of his father’s disappearance, as a flashback shows); and his wife Ghazala isn’t ideologically committed to either side so much as fearful. Even the Claudius of this tale is not hateful: Khurram’s name is well-chosen, the writers preferring to evoke the spectre of the Mughal Empire’s most glamorous fratricidal monarch, Shah Jahan, rather than its most infamous, Shah Jahan’s son Aurangzeb. This concern with his characters’ irreducible humanity, be they Kashmiri militants or ruthless local politicians (but not, it must be said, Indian soldiers), is perhaps the most Shakespearean thing about Bhardwaj’s adaptation. As homages to the Bard go, one could do worse.

One could also do better: the movie degenerates as it starts to hew more closely to the plot of Hamlet, until, by the end, we are left with a farce that has little to do with either Hamlet or good cinema. It’s a great pity, because through the first two-thirds of the movie Haider is Bhardwaj at his most cinematic: the pacing is fantastic, the narrative grabs you and won’t let go, to the point where I realized on multiple occasions that I was half-holding my breath while watching the movie unfold— it didn’t seem to matter just what was happening on screen, I couldn’t keep my eyes away. And oh, those visuals: this isn’t the Kashmir of picture postcard valleys, but possessed of a more ordinary beauty, shabby and wild. Crucially for the film’s texture (and perhaps for its politics), this beauty isn’t merely natural, but cultural: we see the insides of wonderful old Kashmiri houses, intricately carved woodwork (in one scene, a jaw-dropping headboard serves as backdrop to Tabu’s face when she wakes up), and fabrics so lovely the heart aches to reach out and touch them (the stand outs for me were a shawl Kulbushan Kharbanda (playing Haider’s grandfather) wears in a flashback sequence at his home; and Tabu’s black kurta with green embroidery at a public meeting: these are objects so lovely they wound). Nothing in Maqbool, Omkara, or Kaminey prepared me for the open spaces and trees in Haider, and while cinematographer Pankaj Kumar surely deserves a lot of credit, the memory of The Blue Umbrella suggests that Bhardwaj might have an especial affinity for the Himalayan winter. Not since Mani Ratnam’s “Satrangi” from Dil Se has anyone captured any part of Kashmir so memorably—and that song was all of seven minutes; Bhardwaj’s visuals demand more patience here, and their rewards are gentler. 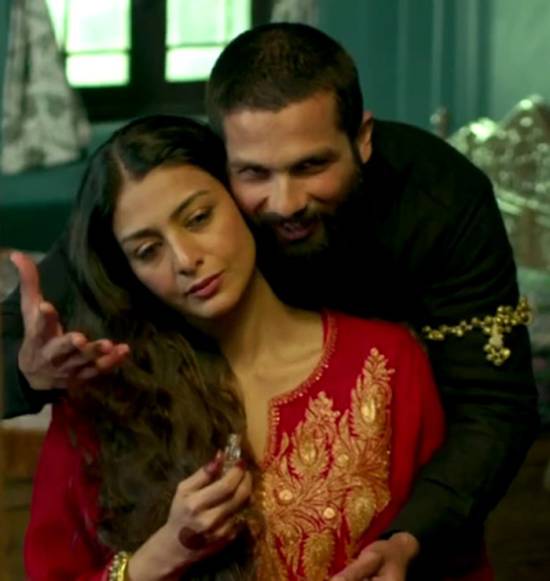 Tabu deserves all the accolades she has been receiving for her performance, and then some: her wary eyes, with shadows under them, make the movie worthwhile on their own; and when we see her running after Haider after he sees her singing and laughing with her brother-in-law, her fully covered bosom disturbing the luxuriant kaftan she wears, we almost sympathize with Khurram: if ever a woman was worth betraying your brother for, surely this is the one. (Bhardwaj appreciates this fully: his Hamlet is post-Freudian, and the erotic charge when the boy Haider applies ittar on his mother’s neck, or when the adult Haider kisses it, is un-mistakable. One might speculate— although Bhardwaj doesn’t do much with it— that Khurram’s trespass with Ghazala is unforgivable precisely because it gives flesh to Haider’s own traitorous desire.) Shahid Kapoor does well as Haider (far better than I had given him credit for after the first trailer), although Kay Kay, while his usual enjoyable self, doesn’t imbue Khurram with the sort of nuance the role demands. Shraddha Kapoor’s Arshia is under-written and inadequate as any kind of Ophelia, but (and this is a compliment) she is barely recognizable as the actress from Ek Villain, reminding us that few contemporary Hindi film directors are as interested in female characters— or at least their eyes— as Bhardwaj is.

A number of viewers have objected to the film's politics as "one-sided", that is, as sympathetic to the views of those in favour of Kashmir's secession from India. The reality is a little more complicated: Haider simply underscores that every other popular Hindi film about Kashmir has been about abstractions, about the Big Ideas of Peace, Love, Terrorism, and Indian nationalism, that is to say about debates that the wider Indian public might or might not be engaged in; while Haider throws in its lot with representing the fabric of life in Kashmir for a certain kind of person at certain moment in time. That is, Haider offends inasmuch as, and precisely because, it insists on showing what the world might seem like to a Kashmiri Muslim during the state's wretched 1990s, replete with gross human rights abuses, black sites, state repression, and militancy (both Pakistan- and India-sponsored), without embedding this into any kind of mainstream narrative. If the rest of us are offended by this representation's indifference to how central Kashmir is to our notions, that testifies to our political narcissism; indeed, Haider's (understandable) narcissism— his father's absent body embodies Kashmir to him— unsettles us precisely because it is the local reflection of our own, more national self-regard. Haider is uninterested in any other story but that of his father's betrayal by both his uncle and mother, and is indifferent to Ghazala's pain in being trapped in a love-less marriage; to us, who have been similarly indifferent, in the sense that we have for far too long been interested in ideas of Kashmir, and what those say about the ideas of India (or Pakistan, for that matter), rather than the people of Kashmir, Bhardwaj's mirror is discomfiting.

As an aside, there is something more than a little perverse on this insistence on "balance", on pairing State atrocities with those committed by militants, Kashmiri or otherwise. But such "balance" yields not fairness but an equivalence between the Indian state and non-state actors, an inadvertent concession of sovereignty's attributes to those who cannot be deemed to legitimately possess them. In their devotion, nationalism's adherents turn treasonous. More bluntly: the sort of "fairness" that would lead one to invoke the spectre of militant abuses every time violations by arms of the State are discussed undermines the position of the Indian state's adherents. There can't be any "fairness" or "balance" because there isn't any counter to the Indian state in Kashmir (to say that there is defeats the whole purpose, which is why official channels, more sensitive to the attributes and pretensions of sovereignty, prefer to deny claims of abuses, not, as Twitterati and bloggers do, cite justificatory atrocities by the other side).

I don’t mean to be coy here: the Indian Army is not the good team in this movie, and nor are the soldiers we encounter fully realized characters the way they would have been in a Shakespeare play; they serve here not as people but as threatening manifestations of a power that is malign because it is unaccountable. And it is bitterness at this unaccountability, rather than any question of whether or not the filmmakers are “anti-national,” that serves as the appropriate frame for Haider. The very atrocities the film focuses on— extra-judicial killings and “disappearances” too well-documented to be denied; torture; the government sponsoring of militants to fight militants (amply reported in the mainstream media itself); the power over life and death afforded by the Armed Forces Special Powers Act (“AFSPA”), a statute that blights life in several states, not just Kashmir— testify to this, marking out the contours of a grievously injured liberalism and political culture, of which Kashmir is merely one symptom. (Likewise, I am not insensitive to the fact that this film cleared the censors, and despite the rumoured cuts and alterations that entailed, the fact that it was cleared at all is striking, and does the Board a lot of credit.) Indeed, the injustice of this unaccountability is a better frame for the film than even Hamlet is, as Bhardwaj and Peer re-work a number of the play’s tropes into commentary on Kashmir: thus, “to be or not to be” is here not an expression of any interiority, but the state of limbo the families of the disappeared find themselves in; the same is true of the disappeared themselves, the ghosts who haunt Kashmir from beyond the grave. It doesn’t help illuminate Hamlet for us, but it does serve to shed some light over Kashmir.

Umair Ahmed Muhajir blogs about films at qalandari.blogspot.com and satyamshot.wordpress.com

O, Ma! May The Farce Be With You