His term of 13 months and five days as the Chief Justice of India was perhaps the most turbulent for any Chief Justice. 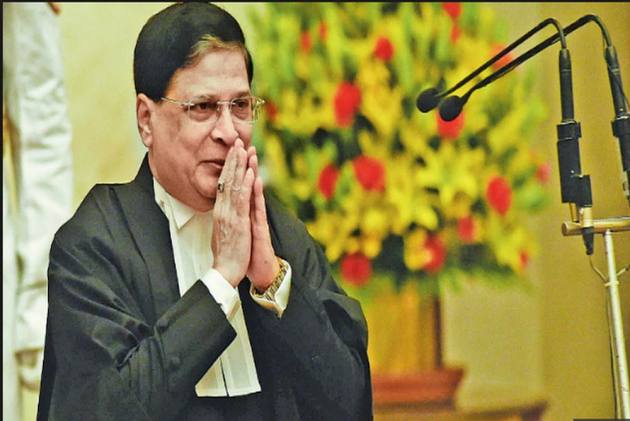 Chief Justice Dipak Misra, who will have his last working day as CJI on Monday, will be remembered in the Indian judicial history as perhaps the only head of the top court who saw rebellion by four of his senior most colleagues.

Another incident that stands out during his tenure is an unsuccessful impeachment motion against him in a move led by senior lawyer and Congress leader Kapil Sibal.

On the brighter side, CJI Misra will be given credit for the nod to live-streaming of the top court's proceedings -- a move that will take court proceedings to the drawing rooms of the people.

His term of 13 months and five days as the Chief Justice of India was perhaps the most turbulent for any Chief Justice, which saw his brother Judges and some from the Bar openly questioning his style of functioning in allocation of cases/matters to different benches and listing Constitution Bench matters before a bench of Judges who were relatively newcomers to the top court.

There was a perception, also voiced by the four rebel Judges, that matters of particular significance, including that of deceased Special Court Judge B.H. Loya, were being listed before a certain bench.

The then second-in-command, Justice J. Chelameswar, set up a five-Judge Constitution Bench to hear the plea for an SIT probe into graft allegations involving a Lucknow-based medical college.

The order passed in the afternoon of November 9, 2017 was reversed by a five-Judge Constitution Bench a day later. The entire move was perceived as being targeted against the CJI.

It was also a time which saw lawyers, including senior counsel Prashant Bhushan, raising their voices against the bench in Court Number one.

Bhushan insisted that the CJI should not be a part of the bench hearing the plea for SIT probe into the Lucknow medical college scam and raised the pitch of his voice and stormed out of the court.

As some lawyers took exception to Bhushan's "improper conduct" and wanted to condemn it, Chief Justice Misra said that "no condemnation in the court. We are not here for this."

The top court also also saw both Sibal and Rajeev Dhavan plead against going ahead with the hearing of the Ram Janambhoomi-Babri Masjid matter as it was politically sensitive.

Faced with situations where his own brother Judges raised questions on his style of functioning and some of the prominent faces from the bar too joining the chorus, Chief Justice Misra weathered the storm with his usual calm and tact.

But that was not the only facet of his tenure as the CJI. His term will also be remembered for his assertion that the self-appointed right-wing cultural policemen would not be allowed to interfere with the creative expressions of artistes in cinema when the court directed that the screening of films like 'Padmavat' can't be interfered with.

Similarly, the apex court came to the aid of Malayalam actress Priya Prakash Varrier by quashing the FIR against her and directing no case be registered against her for winking in a scene.

At the same time, he demonstrated his sterner side in directing the Centre and the state governments to pull up their socks and tighten their belts to curb vigilantism and mob lynching.

CJI Misra, when he was sitting in Court Number 3, passed an order in November 2016 for mandatorily playing the national anthem in cinemas before the screening of films. He rescinded this order in January this year stating that this was no longer mandatory.

All through his tenure, CJI Misra was unequivocal in upholding the liberty and rights of the people, particularly women.

He presided over a bench that decriminalised homosexuality, allowed the entry of women of all ages in Sabarimala temple, decriminalised adultery and curbed the use of Aadhaar.