12,000 People Moved Out Of Afghanistan

Almost 12,000 people have been moved out of the war ravaged country since August 14. 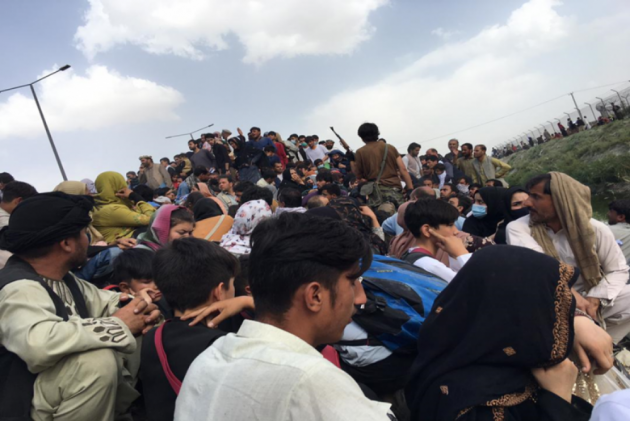 Nearly 12,000 people have been moved out of Afghanistan since August 14 this year, even as 5,200 US troops remain stationed in the ravaged country.

"The US military footprint and Kabul now has more than 5,200 total troops on the ground. Kabul airport remains secure and open for flight operations. There are now multiple gates that have access for entry into the airfield, which will help expedite processing in a safe and orderly manner," said Major General Hank Taylor, Commanding General of the Army Operational Test Command.

A total 7,000 people have been evacuated from the country, since the start of evacuation operations on August 14. Cumulatively, the number of people moved out of Afghanistan is somewhere close to 12,000.

The Taliban took control of Afghanistan on Sunday. Their sudden victory, which comes as the US withdraws from the country following a 20-year-war, has sparked chaos at Kabul's airport, from where America and allied nations are trying to safely evacuate thousands of citizens and allies.

Major General Taylor, who has been given the responsibility to airlift US citizens from Afghanistan amid the Taliban crisis, said in the past 24 hours, 13 C-17s arrived with additional troops and equipment, and 12 C-17 military planes departed.

These flights, containing more than 2,000 passengers, left Kabul and arrived at designated safe havens and staging areas in the CENTCOM area of operation, he said.

"Since the start of evacuation operations on August 14, we have airlifted approximately 7,000 total evacuees. This increase is reflective of both a ramp up of aircraft and airlift capability, faster processing of evacuees, and greater information and fidelity in reporting,” Taylor told reporters at a Pentagon news conference.

The US, he said, is ready to increase throughput and have scheduled aircraft departures accordingly.

"We intend to maximize each plane's capacity. We're prioritising people above all else. And we're focused on doing this as safely as possible with absolute urgency,” he said.

At a separate news conference, State Department spokesperson Ned Price told reporters that there are 6,000 people at the airport right now who've been fully processed by a consular team and will soon board planes.

"Overnight, we significantly expanded how many American citizens locally employed staff, SIV applicants, and other vulnerable Afghans who are eligible for departure, and we offered to consider transit to the airport. We're aware of congestion around the airport. We are working closely with the Department of Defense to facilitate safe and orderly access for consular processing on the airport compound,” he said.

Secretary of State Tony Blinken spoke with the G7 foreign ministers and the high representative of the European Union to discuss the situation in Afghanistan, he said.

"All leaders underscored the imperative of safe passage for those who wish to leave Afghanistan and the need for an inclusive political resolution that protects the fundamental human rights of all Afghans,” Price said.

He said the leaders agreed that the international community's relationship with the Taliban will depend on their actions and not their words.

"Blinken and the G7 foreign ministers also exchanged views on counterterrorism, humanitarian efforts, refugee migration, and they agreed to remain in close contact on all fronts going forward. Secretary Blinken thanked his foreign counterparts for their steadfast commitment to supporting the Afghan people," Price said. (With PTI inputs)