This barbarism must end, US' top diplomat in Yemen said. 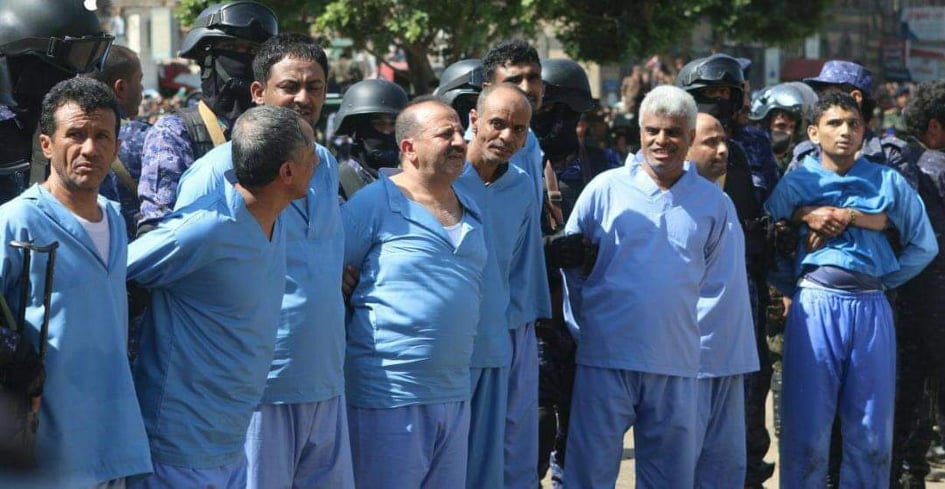 The United Nations, the United States and the United Kingdom on Sunday condemned the executions of nine Yemenis by the country's Houthi rebels over allegations that they were involved in the killing of a senior Houthi official in an airstrike by the Saudi-led coalition more than three years ago.

The Iranian-backed Houthis on Saturday publicity executed the nine by firing squad. Hundreds of people, mostly Houthis and their supporters, attended the execution in the infamous Tahrir square in the rebel-held capital of Sanaa.

UN Secretary-General Antonio Guterres said the trial in which the nine were convicted and sentenced to death did not meet “the requirements of fair trial and due process," according to a statement from Stephane Dujarric, spokesperson for the UN chief.

Dujarric said the secretary general “deeply regrets” the executions, which caused outrage across Yemen including in Sanaa, where people usually refrain from criticizing the Houthis for fear of reprisals.

Rebel leader Mohammed Ali al-Houthi, head of the Houthis' Supreme Revolutionary Council, tweeted that they have rejected the UN's challenge to the rebel-controlled judiciary.

The nine were among more than 60 people the Houthis accused of involvement in the targeted killing of Saleh al-Samad in April 2018. They were charged with spying for the Saudi-led coalition, which has been waging war against the rebels for years in an effort to bring back Yemen's internationally recognised government to power.

Al-Samad, who held the post of president in the Houthi-backed political body, was killed along with six companions in an airstrike by the Saudi-led coalition in the coastal city of Hodeida.

The US' top diplomat in Yemen, Cathy Westley, called the trial “sham” that followed “years of torture and abuse” of the executed people.

“This outrageous action is another example of the Houthi indifference to basic human rights...This barbarism must end,” Westley said in a message posted on the embassy's Twitter account.

The British embassy in Yemen also condemned “the brutal Houthi execution", which showed “blatant disregard" for a fair trial and due process.

The nine, including a 17-year-old boy, were arrested months after al-Samad's killing. They were held for months in undisclosed places where they suffered inhumane treatment, according to Abdel-Majeed Sabra, a Yemeni lawyer representing one of the people executed.

The UN secretary general also condemned the killing of at least six people from the same family when a suspected airstrike by the by the Saudi-led Coalition hit their vehicle Saturday in an area between the provinces of Shabwa and Bayda.

He urged warring sides of Yemen's war to stop fighting and encouraged Yemeni parties to engage with the UN “in good faith and without preconditions” to relaunch talks for a peaceful settlement to the conflict.

Yemen has been embroiled in a civil war since 2014, when the Houthis swept across much of the north and seized Sanaa, forcing the internationally recognised government into exile. The Saudi-led coalition entered the war the following year on the side of the government.

The stalemated conflict has killed more than 130,000 people and spawned the world's worst humanitarian crisis.