According to Johns Hopkins University Covid-19 tracker, the US has reported over 9,127,000 confirmed cases and reported more than 230,000 deaths. 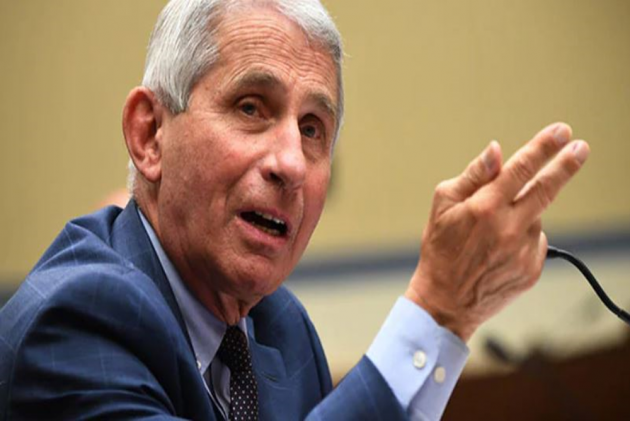 The US must make an abrupt change in public health practices as it could surpass 100,000 new coronavirus cases a day and rising deaths in the coming weeks, the country's top infectious disease expert has warned Americans just days ahead of the presidential election.

The warning from Dr Anthony Fauci came as President Donald Trump, himself a Covid-19 survivor, has been downplaying the rising cases in a number of states and dangerously holding huge rallies with few of his supporters wearing masks and no social distancing.

Fauci told The Washington Post that the nation is "in for a whole lot of hurt."

He spoke as the US set a new daily record on Friday with more than new 98,000 cases. As hospitalisations increase, deaths are also ticking up, with more than 1,000 reported on Wednesday and Thursday, bringing the total to over 230,000 since the start of the pandemic, the report said.

"We’re in for a whole lot of hurt. It’s not a good situation," Fauci, 79, Director of the National Institute of Allergy and Infectious Diseases, warned.

"All the stars are aligned in the wrong place as you go into the fall and winter season, with people congregating at home indoors. You could not possibly be positioned more poorly,” he told the Post, ahead of the November 3 presidential polls where Trump, a Republican is being challenged by former US vice president Joe Biden, the nominee of the Democratic Party.

Fauci, a leading member of the government's coronavirus response, said the US needed to make an abrupt change in public health practices and behaviours. He said the country could surpass 100,000 new coronavirus cases a day and predicted rising deaths in the coming weeks.

According to Johns Hopkins University Covid-19 tracker, the US has reported over 9,127,000 confirmed cases and reported more than 230,000 deaths.

Fauci’s blunt warning came as Trump has rallied in cities experiencing record surges in infections and hospitalisations in a last-ditch effort to convince voters he has successfully managed the pandemic. He has held maskless rallies with thousands of supporters, often in violation of local health mandates, the leading newspaper pointed out.

At a recent campaign rally, Trump said that US doctors record more deaths from Covid-19, the disease the coronavirus causes, than other nations because they get more money.

“I mean our doctors are very smart people. So what they do is they say, ‘I’m sorry but everybody dies of Covid,’?” Trump said on Friday at a rally in Waterford Township, Michigan, without offering any evidence.

Fauci, who is widely trusted by the public after a lengthy career serving under six presidents from both parties, appreciated White House chief of staff Mark Meadows saying last weekend on CNN that the Trump administration was not going to control the pandemic.

"I tip my hat to him for admitting the strategy,” Facui said. “He is straightforward in telling you what’s on his mind. I commend him for that.”

"It's unacceptable and breaking with all norms for Dr. Fauci, a senior member of the President's Coronavirus Taskforce and someone who has praised President Trump's actions throughout this pandemic, to choose three days before an election to play politics," Deere said in the statement.

"As a member of the Task Force, Dr. Fauci has a duty to express concerns or push for a change in strategy, but he's not done that, instead choosing to criticise the President in the media and make his political leanings known by praising the President's opponent— exactly what the American people have come to expect from The Swamp," Deere added.