Afghan Rivals End Talks In Doha With No Breakthrough, To Meet Again 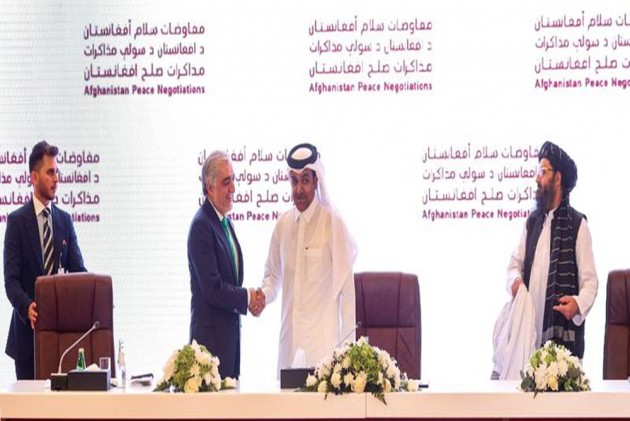 Afghanistan continues to teether on the brink as the Taliban is in no mood to yield any ground following its swift military success. Afghans watched weekend talks in Doha with a fervent prayer for an Eid ceasefire. But at the end of two days of talks between Abdullah-Abdullah the chief Peace negotiator for the government and the Taliban’s Abdul Ghani Baradar, the two sides are no nearer to an agreement, dashing hopes of a peaceful Eid for millions of Afghan civilians. Previously, the Taliban had temporarily halted fighting during Eid, but now scenting victory, they are in no mood to stop the momentum as swathes of the country come under their control.

A political settlement sitting across the table appears impossible. But the two sides have kept it open-ended by declaring that the conversation will resume next week. Taliban leader Mullah Hibatullah Akhundzada in an Eid message on Sunday emphasized the need for a political solution to the Afghan crisis. He said the Taliban is ``serious’’ about a political settlement but made it clear that it was keen on establishing an Islamic Emirate which could secure peace and security in the country. The head of the Afghan government delegation Abdullah-Abdullah said that ahead of the Doha meet Afghan politicians and government leaders had one message: a negotiated peaceful settlement.

“The Taliban’s offensive is in direct contradiction to their claim to support a negotiated settlement,” said the joint statement. “It has resulted in the loss of innocent Afghan lives, including through continued targeted killings, displacement of the civilian population, looting, and burning of buildings, destruction of vital infrastructure, and damage to communication networks.”

Whether such appeals will have any impact remains to be seen. Emboldened by its military success the Taliban is taking a maximalist position on talks. Many in India believe that Pakistan is advising the Taliban through Islamabad is refuting all such allegations. Afghanistan’s vice president Amrullah Saleh had earlier accused Pakistan of threatening to provide air support to the Taliban if the Afghan forces try to take back the Spin Boldak the town which has a border crossing with Pakistan. Kandahar is the provincial capital, where the Taliban leadership during Mullah Omar’s time was headquartered.

President Ghani and his senior government minister charge Pakistan of helping the Taliban, and in recent days the relations have deteriorated further. The kidnapping and alleged torture of the Afghan ambassador’s daughter in Islamabad have led to a bitter war of words between the two countries. Afghanistan has recalled its ambassador and most of its diplomatic staff from Islamabad. Pakistan on Sunday denied that the abduction of the Afghan diplomats’ daughter. Interior Minister Sheikh Rashid said this was an ‘international racket’ to defame Pakistan and pointed a finger at India’s intelligence agency RAW. Islamabad believes that the Afghan government and India are hand in glove to defame Pakistan. India too thinks that Pakistan has encouraged the Taliban to target Indian interests in Afghanistan. Last week there were reports of India built the Salma dam is being targeted by the Taliban.