After Nearly 20 Years, US Troops Hand Over Bagram Airfield To Afghans

The airfield was handed over to the Afghan National Security and Defense Force in its entirety, they said on condition they not be identified because they were not authorized to release it to the media. 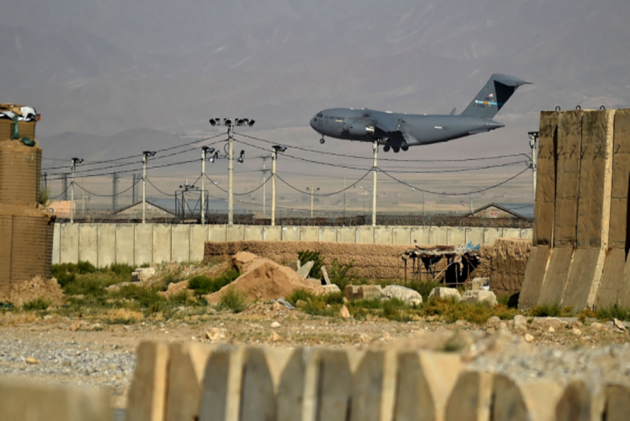 After nearly 20 years, the US military left Bagram Airfield, the epicentre of its war to oust the Taliban and hunt down the al Qaida perpetrators of the 9/11 terrorist attacks on America, two US officials said Friday.

The airfield was handed over to the Afghan National Security and Defense Force in its entirety, they said on condition they not be identified because they were not authorized to release it to the media.

One of the officials also said the US top commander in Afghanistan, Gen. Austin S Miller, “still retains all the capabilities and authorities to protect the forces.”

Explained: When Is The US War In Afghanistan Really Over?

As Troops Leave, US To Keep Airstrike Option In Afghanistan

However, the U.S. military will remain involved in the Afghanistan war into September, keeping the option of launching airstrikes against the Taliban to defend Afghan forces, U.S. officials said, even as the final combat troops prepare to leave the country in coming days.

For weeks, officials have said the withdrawal of the main U.S. military force and its equipment from Afghanistan would be largely completed by this weekend, well ahead of the Sept. 11 deadline set by President Joe Biden. Army Gen. Scott Miller, the top U.S. commander there, would then leave, marking a significant turning point in the U.S. mission. But a range of complicating factors means that will not end America's involvement in the 20-year war.

The withdrawal is the clearest indication that the last of the 2,500-3,500 US troops have left Afghanistan or are nearing a departure, months ahead of President Joe Biden's promise that they would be gone by Sept 11.

It was clear soon after the mid-April announcement that the US was ending its “forever war” that the departure of U.S. soldiers and their estimated 7,000 NATO allies would be nearer to July 4, when America celebrates its Independence Day.

Most NATO soldiers have already quietly exited as of this week.

The US has refused to say when the last US soldier would leave Afghanistan, citing security concerns, but also the protection of Kabul's Hamid Karzai International Airport is still being negotiated. Turkish and US soldiers currently are protecting the airport.

That protection is currently covered under the Resolute Support Mission, which is the military mission currently closing.

Until a new agreement for the airport's protection is negotiated between Turkey and the Afghan government, and possibly the United States, the Resolute Support mission would appear to continue.

The U.S. will also have about 6,500 troops in Afghanistan to protect its sprawling embassy in the capital.

At its peak, Bagram Airfield saw more than 100,000 US troops pass through its sprawling compound barely an hour's drive north of the Afghan capital Kabul.