As Taliban Tighten Their Grip, Kabul Airport Becomes The Only Way To Escape

'I packed whatever I could to start a new life away from this war,' said Naweed Azimi, who flew to Istanbul with his wife and five children, fearful the Taliban would kill him for working with NATO as a subcontractor. 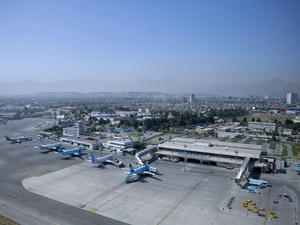 As a Taliban offensive encircles the Afghan capital, there's increasingly only one way out for those fleeing the war, and only one way in for US troops sent to protect American diplomats still on the ground: Kabul's international airport.

A steady stream of people makes its way first to ticket sale counters set up on the parking lot outside the terminal. They push their luggage, load carts with carpets, television sets and mementos, stuff clothes inside purses to make their weight limit as they slowly inch forward.

The lucky ones, those who managed to get a ticket for a flight out to anywhere, then wait more than three hours to make it inside the terminal, bidding tearful goodbyes to loved ones they are leaving behind.

As the Taliban draw closer, the lines and the panic only grow.

“I packed whatever I could to start a new life away from this war," said Naweed Azimi, who flew to Istanbul with his wife and five children, fearful the Taliban would kill him for working with NATO as a subcontractor.

Surrounded by perimeter fencing and secured by multiple checkpoints, the airport is in sight of the mountains ringing the Afghan capital. Those flying out have for years had to trudge with their luggage up to outdoor screening points before getting to the terminal — a precaution meant to prevent insurgent suicide bombings.

On an ordinary day, the terminal would be filled with Afghans in business suits and traditional dress, mingling with tattooed military contractors sporting wraparound sunglasses and aid workers from all corners of the world.

That sedate crowd has been replaced with panicked travellers scrambling to leave Kabul. Afghan airlines Ariana and Kam Air have every seat booked for at least the next week, airport workers said. Those with a plane ticket in hand also have to get a coronavirus test at a clinic amid the pandemic in order to leave.

“I had never see such a rush at the airport before,” said Farid Ahmad Younusi, an Afghan businessman who said he abandoned a contracting firm worth $1 million and fled Kandahar with the Taliban trying to find him. “Now Taliban have everything that I worked for over the past 20 years.”

The airport rush is only expected to get worse — and even more complicated.

Afghan security forces, who maintain bases at the airfield, were joined this week by some of the 3,000 American Marine and Army troops whose mission is to evacuate staff from the U.S. Embassy in Kabul. The Biden administration has not ruled out a full embassy evacuation. As of Thursday, there were roughly 4,200 staffers at the embassy, but most of those are Afghan nationals, according to the State Department.

"This is a specific, narrowly focused, tailored mission to help with the safe, secure movement of the reduction of civilian personnel in Kabul, as well as to help support the acceleration of the special immigrant visa process by the State Department,” Pentagon spokesman John Kirby said Friday. Those visas are for Afghans who once worked for the US government and feel threatened by the Taliban.

With the Taliban nearing Kabul's doorstep, Afghans and US personnel can't count on driving out of the country. The Taliban on Saturday tightened their grip around Kabul by capturing all of Logar province, reaching just 11 kilometres south of the capital, Kabul.

Those at the airport on Friday night described paying $375 and more for rides from the northern city of Kunduz on unpaved roads to avoid Taliban checkpoints, a trip that typically costs around $40.

The cars “don't even take a break,” said Yousuf Baghban as he waited for his flight out. "If you stop, you are gone.”

Having abandoned Bagram Air Base — which served as the American military's main hub in Afghanistan — ahead of the final US pullout at the end of the month, the U.S. military will now have to rely on flying people out of the Kabul airport.

“We will be able to move thousands per day but that's just the airlift capacity,” Kirby said.

There may also be the need to move the operations of the U.S. Embassy to the airport as well, if the Taliban push into Kabul and begin battling for control of the city, though State Department spokesman Ned Price repeatedly declined to discuss that possibility. The Kabul airport also has Turkish troops guarding the facility.

The airport's history mirrors that of the country's troubled modern times. Soviet engineers built the airport in 1960 as a gift while America offered its own help developing Afghanistan's airfields during the Cold War. After the 1979 Soviet invasion of Afghanistan, the airport became a key military base for Moscow. It suffered damage during the intra-Afghan war that followed and became a target for airstrikes in the US-led invasion in 2001.

The West gave tens of millions of dollars to rebuild the airport and clear it of mines and unexploded bombs. Japanese donations bought metal detectors and helped build the airport's new international terminal.

For now, commercial flights continue at the airport. Air India, Dubai-based carriers Emirates and FlyDubai, Pakistan International Airlines and Turkish Airlines all either have flights en route or planned to Kabul for the next days. Local Afghan airlines continue to fly as well.

But passengers worry that at any moment the Taliban could come, closing the country's airspace.

On Friday night, passengers pushed through security checkpoints, lines and more checks to board a Kam Air flight to Istanbul. One traveller, Tawfiq Beg, said the Taliban killed his uncle, a militia commander, three weeks ago. Beg's father sold some of the family's land — at half its value — to be able to afford his ticket out.

“Maybe this was the final goodbye,” Beg said.