At Least 14 Members Of Taliban's Govt On UNSC's Terrorism Blacklist 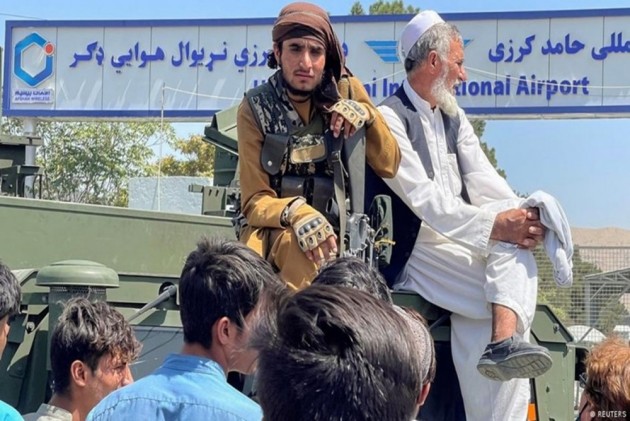 Raising concern of the international community over the composition of the new Cabinet in Afghanistan, at least 14 members of the Taliban's hard-line interim government in Kabul are on the UN Security Council's terrorism blacklist, including acting Prime Minister Mullah Mohammad Hasan Akhund and his both deputies.

"At least 14 members of the Taliban's interim government are on the UN Security Council blacklist,” BBC Urdu reported.

Who Is Siraj Haqqani, New Afghan Interior Minister With $5 Million Bounty On His Head?

The 33-member interim Cabinet includes four of the five leaders known as the "Taliban Five" who were once held at the Guantanamo Bay prison. They include Mullah Mohammad Fazil (deputy defence minister), Khairullah Khairkhwa (information and culture minister), Mullah Noorullah Noori (Borders and Tribal Affairs minister) and Mullah Abdul Haq Wasiq (Director of Intelligence). The fifth member of the group, Mohammad Nabi Omari, has been appointed as governor of eastern Khost Province recently.

Specially designated global terrorist Sirajuddin Haqqani, who carries a reward of USD 10 million US bounty on his head, is the acting interior minister while his uncle - Khalil Haqqani – has been named as acting minister for refugees.

The "Taliban Five" leaders were released from Guantanamo Bay prison by the Obama administration in 2014 in exchange for US Army deserter Bowe Bergdahl. Fazil and Noori are accused of ordering the massacres of ethnic Shia Hazara, Tajik, and Uzbek communities in Mazar-i-Sharif in 1998.

The Taliban had promised an "inclusive" government that represents Afghanistan's complex ethnic makeup, but there is no Hazara member in the Cabinet. All of the Cabinet ministers announced on Tuesday are already established Taliban leaders who fought against the US-led coalition forces since 2001. No woman has been named in the interim Cabinet.

Acting Prime Minister Mullah Hasan has been described as "a close associate" of Taliban founder Mullah Omar in a UN sanctions report. He is presently head of the Taliban’s powerful decision-making body - Rehbari Shura or leadership council.

Both Deputy Prime Ministers - Mullah Abdul Ghani Baradar and Maulvi Abdul Salam Hanafi, who is involved in drug trafficking, are also on the UN blacklist.

Acting interior minister Sirajuddin Haqqani, son of the famous anti-Soviet warlord Jalaluddin Haqqani and chief of the notorious Haqqani Network, is wanted by the FBI for questioning in connection with the January 2008 attack on a hotel in Kabul that killed six people, including an American citizen. He is believed to have coordinated and participated in cross-border attacks against the US and coalition forces in Afghanistan.

Two other members of the Haqqani clan were also named to positions in the interim government, indicating the hand of Pakistan in the Taliban-run government.

The announcement of the interim government came three days after Pakistan's spy agency Inter-Services Intelligence (ISI) Director General Lt Gen Hameed dashed to Kabul on an unannounced visit last week. The inclusion of top leaders of the Haqqani Network, which is believed to have close links with the ISI, in the Taliban government is an indication of the influence Islamabad, especially its intelligence agencies, have over the Taliban.

Sirajuddin Haqqani and some other members of the new Cabinet studied at the Darul Uloom Haqqania - a madrassa in Akora Khattak in Nowshera in northwest Pakistan, which has also been dubbed the Taliban University or the 'University of Jihad' internationally.

The Imran Khan-led Pakistan Tehreek-e-Insaaf party government in Khyber-Pakhtunkhwa had allocated Rs 300 million to the Darul Uloom Haqqani in its annual budget in 2016.

Qari Din Hanif, acting Minister of Economy, and Maulvi Noor Jalal, deputy interior minister, are other members of the Cabinet who are on the UN blacklist.

Commenting on the Taliban’s Cabinet, Farhan Haq, Deputy Spokesman for the Secretary-General Antonio Guterres, said the UN does not engage in recognition of governments and reiterated that only a negotiated and inclusive settlement will bring sustainable peace to the conflict-torn country.

In response to a question that those named to the government by the Taliban include individuals designated under the UN sanctions regime and whether the UN will recognise the Taliban government, Haq reiterated that “the UN doesn't engage in recognition of governments. That's an issue for member governments to do."

Secretary of Iran’s Supreme National Security Council Ali Shamkhani in a tweet on Wednesday expressed concerns over the Taliban’s move to ignore an inclusive government in Afghanistan.

"Afghanistan's first priority is stability & peace. Ignoring the need for inclusive government, foreign intervention and the use of military means instead of dialogue to meet the demands of ethnic groups and social groups are the main concerns of the friends of the Afghan people," he tweeted.

The US has said that it is assessing the new Afghan government announced by the Taliban.

"We note the announced list of names consists exclusively of individuals who are members of the Taliban or their close associates and no women. We also are concerned by the affiliations and track records of some of the individuals," a State Department statement said.

"This is a government of terrorists, by the terrorists, and for the terrorists," said the Republican Study Committee, which is the largest conservative caucus in the House of Representatives and chaired by Congressman Jim Banks.