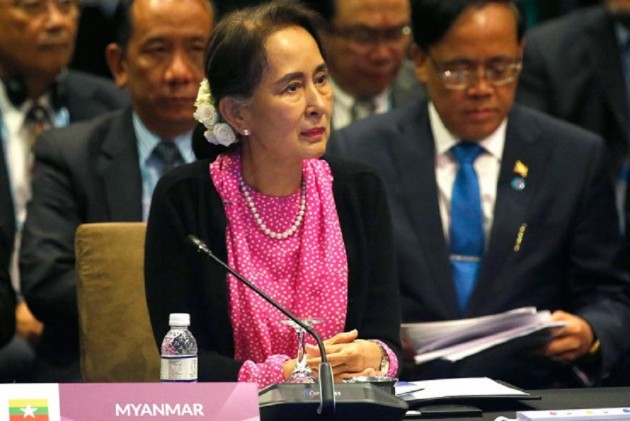 Nobel peace laureate Aung San Suu Kyi arrived at the UN's top court Tuesday to personally defend Myanmar against accusations of genocide, in a remarkable fall from grace for the woman once hailed worldwide as a rights icon.

Wearing traditional Burmese dress, Myanmar's civilian leader did not speak to waiting media as she stepped out of a car and entered the International Court of Justice in The Hague.

The case, brought by the west African state of The Gambia, is the first attempt to bring Myanmar to justice over its bloody 2017 military crackdown on the Rohingya Muslim minority.

The Gambia asked the UN's top court to order Myanmar to "stop this genocide" of the Rohingya Muslim minority, as a hearing attended by Myanmar's former peace icon Aung San Suu Kyi got underway.

"All that The Gambia asks is that you tell Myanmar to stop these senseless killings, to stop these acts of barbarity that continue to shock our collective conscience, to stop this genocide of its own people," Gambian Justice Minister Abubacarr Tambadou told judges.

The Gambia in its application alleges that Myanmar had carried out mass murder and rape against the Rohingya Muslim Community in the Rakhine State of Myanmar.

The Burmese soldiers “systematically shot, killed, forcibly disappeared, raped, gang-raped, sexually assaulted, detained, beat and tortured Rohingya civilians and burned down and destroyed Rohingya homes, mosques, madrasas, shops and Qur’ans”, the submission from the west African country alleges, as stated in the report by The Guardian.

The 600,000 Rohingyas who remain in Myanmar are said to be in “real and significant danger” of further genocidal acts, the report says.

The public hearing that has commenced on 10 December will last till 12 December.

Suu Kyi was once mentioned in the same breath as Nelson Mandela and Mahatma Gandhi, but her international reputation has been tarnished by her silence over the plight of the Rohingya, and her defence of the same generals who once kept her under house arrest.

The case will also be watched in Bangladesh, where around 740,000 Rohingya were forced to flee into sprawling camps by the bloody campaign in Myanmar's northwestern Rakhine state.

"I demand justice from the world," said Nur Karima, a Rohingya refugee whose brothers and grandparents were killed in a massacre in the village of Tula Toli in August 2017.

"I want to see the convicts go to the gallows. They killed us mercilessly," Saida Khatun, another refugee from Tula Toli, told AFP.