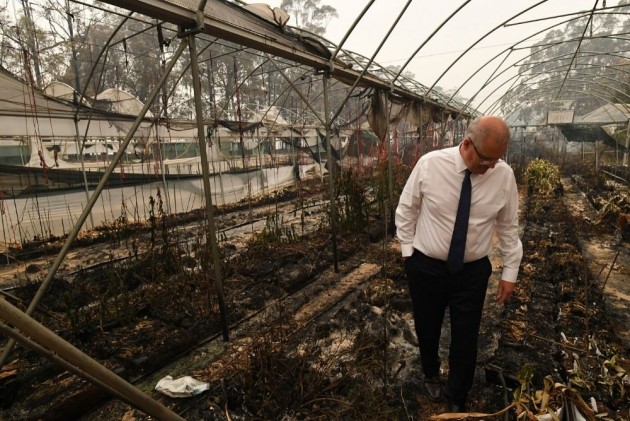 Australian Prime Minister Scott Morrison on Saturday officially postponed his four-day state visit to India from January 13 due to the raging bushfire crisis in his country, saying he looks forward to rescheduling the visit at a mutually convenient time in the coming months.

He was scheduled to hold extensive bilateral talks with Prime Minister Narendra Modi during the visit beginning January 13.

In a statement, the Australian Prime Minister said: "Our country is facing devastating and widespread national bushfires. Our government's entire focus is on supporting Australians in this difficult time – those facing immediate danger and those who are recovering after the fire-front has passed".

The Prime Minister has postponed his state visit to India and his official visit to Japan to stay close to the disaster and recovery operations underway in Australia, the statement said.

"We deeply appreciate the arrangements that India and Japan have made to date and look forward to rescheduling the visits at a mutually convenient time in the coming months," it said.

"Everywhere across the country in the communities we visit we see the absolute devastation and despair these bushfires have brought. What we have also seen is the best of Australians coming together, supporting one another.

"We urge Australians to keep informed about the situation in their area and to follow the directions of state and territory authorities and the ADF as they work to keep people safe. We will do whatever it takes to get Australians through these terrible times," the statement added.

Prime Minister Modi on Friday had a telephonic conversation with Morrison and expressed heartfelt condolences on behalf of all Indians on the damage to life and property due to severe and prolonged bush fires there.

He also offered India's "unstinted support" to Australia and its people, "who are bravely facing this unprecedented natural calamity", according to a statement by the External Affairs Ministry.

Morrison on Saturday called up 3,000 military reserve troops to combat the raging bushfire crisis which has so far claimed the lives of 23 people with high temperatures and strong winds threatening to worsen the conditions across the country. Tens of thousands of residents fled their homes amid catastrophic conditions.

The bushfires have been burning throughout the country for months now, with a state of emergency declared in New South Wales and Victoria while Tasmania and South Australia also face significant threats.

About 100,000 people were said to be in the fire zone of East Gippsland and according to police up to 70 per cent of people had now left the region.

Over 3,000 firefighters are on the frontline, with 31 specialist strike teams in place across NSW.

Australia's military has been assisting with aerial reconnaissance, mapping, search and rescue, logistics and aerial support for months.