Officials said Saturday that two Hindu men were killed in the latest spate of communal violence, taking the death toll to six. 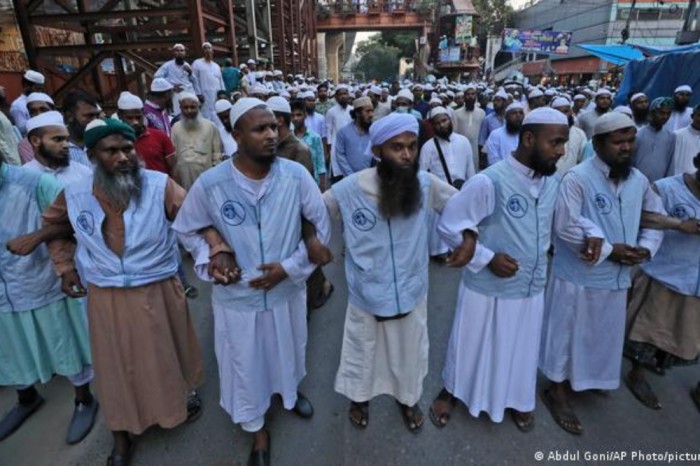 Two Hindus and at least four Muslims have died in ensuing violence in Bangladesh.

The Bangladeshi capital of Dhaka witnessed a second day of unrest Saturday as thousands of Muslims and Hindus staged separate protests.

Tensions in the South Asian country escalated on Wednesday after widely circulated footage on social media showed the Islamic holy book of Quran being placed on the knee of a Hindu god during celebrations for the Hindu festival Durga Puja in the eastern district of Cumilla.

The image was seen as insulting by many of the country's Muslim majority.

Officials said Saturday that two Hindu men were killed in the latest spate of communal violence, taking the death toll to six. At least four people were killed on Wednesday when police opened fire on a mob of around 500 people attacking a Hindu temple in the southern town of Hajiganj.

As tensions spiked, incidents of vandalism at Hindu temples across Bangladesh were reported.

On Saturday, nearly 10,000 demonstrators gathered outside the main mosque in Dhaka, a day after protests at the same spot ended in clashes with police.

Many were seen with banners of Islamist political parties as the crowd chanted, "Down with the enemies of the Islam'' and "Hang the culprits''.

An intersection nearby saw a separate protest by about 1,000 Hindus denouncing the attacks on temples and the killings of the two Hindu men.

Security measures in the violence-hit regions have been tightened with the deployment of paramilitary border guards while Prime Minister Sheikh Hasina met leaders of the Hindu community on Thursday and promised strict action.

The minority Hindu community accounts for nearly 10% of the country's 160 million people.