John Kirby, the chief Pentagon spokesman, said that over 24 hours about 2,000 people, including 325 American citizens, had left aboard 18 flights by US Air Force C-17 transport planes 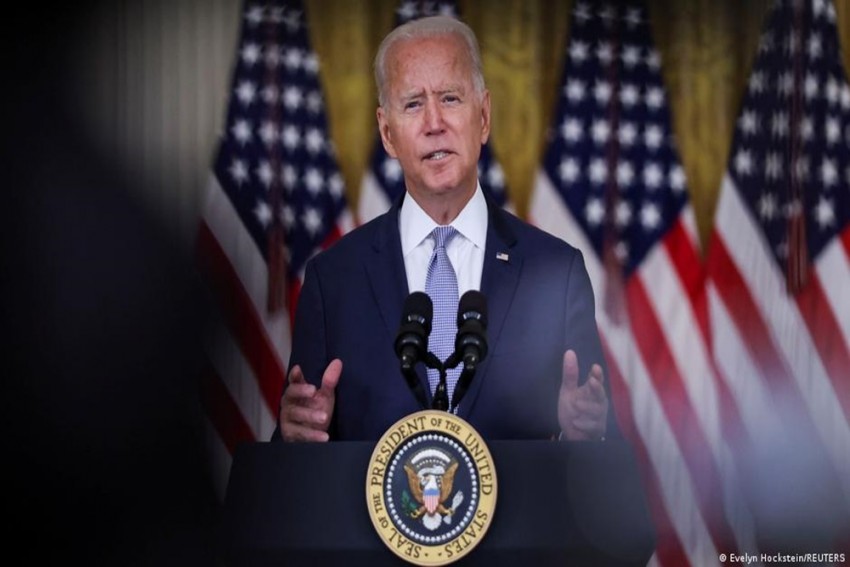 US President Joe Biden will keep the US troops in Afghanistan until every American is evacuated. He may even maintain a military presence there beyond his August 31 deadline for withdrawal.

He also pushed back against criticism that the US should have done more to plan for the evacuation and withdrawal, which has been marked by scenes of violence and chaos as thousands attempted to flee while the Taliban advanced.

In an interview with ABC News, Biden said the US will do “everything in our power” to evacuate Americans and US allies from Afghanistan before the deadline".

Pressed repeatedly on how the administration would help Americans left in the nation after August 31, Biden said, "If there's American citizens left, we're gonna stay till we get them all out".

Human rights must be the center of our foreign policy, not the periphery. But the way to do it is not through endless military deployments. pic.twitter.com/w2jMtgzisE

Up to 15,000 Americans remain in Afghanistan after the Taliban took full control of the nation last weekend.

Defense Secretary Lloyd Austin said earlier Wednesday that the US military does not have the forces and firepower in Afghanistan to expand its current mission from securing the Kabul airport to collecting Americans and at-risk Afghans elsewhere in the capital and escorting them for evacuation.

The question of whether those seeking to leave the country before Biden's deadline should be rescued and brought to the airport has arisen amid reports that Taliban checkpoints have stopped some designated evacuees.

"I don't have the capability to go out and extend operations currently into Kabul,” Austin said.

"And where do you take that? How far do you extend into Kabul, and how long does it take to flow those forces in to be able to do that?"

Austin, a retired four-star Army general who commanded forces in Afghanistan, spoke at his first Pentagon news conference since the Taliban swept to power in Kabul on Sunday.

He said the State Department was sending more consular affairs officers to speed up the processing of evacuees.

"We're not close to where we want to be” in terms of the pace of the airlift, Austin said.

He said he was mainly focused on the airport, which faced “a number of threats” that must be monitored.

"We cannot afford to either not defend that airfield or not have an airfield that's secure, where we have hundreds or thousands of civilians that can access the airfield,” he said, adding that talks with the Taliban were continuing to ensure safe passage for those evacuating.

Austin said there were about 4,500 US troops at the airport, maintaining security to enable the State Department-run evacuation operation that has been marked by degrees of chaos and confusion.

Biden, however, told ABC that there wasn't anything his administration could have done to avoid such chaos.

"The idea that somehow, there's a way to have gotten out without chaos ensuing, I don't know how that happens,” he said.

The number of departing Air Force flights was likely to be similar in the coming 24 hours, Kirby said, although he said he could not estimate how many people they would carry.

He said the administration was considering its options for dealing with a separate but related problem — the abandonment by Afghan security forces of an array of military equipment, weapons and aircraft that have fallen into the hands of the Taliban or other militant groups.

“We don't, obviously, want to see our equipment in the hands of those who would act against our interests or the interests of the Afghan people and increase violence and insecurity inside Afghanistan,” Kirby said.

"There are numerous policy choices that can be made, up to and including destruction."

He said those decisions had not yet been made.  Kirby said several hundred more US troops were expected to arrive at the airport by Thursday.  An Air Force unit arrived overnight that specializes in rapidly setting up and maintaining airfield operations, Kirby said. And he said Marines trained in evacuation support have continued to arrive and will assist in getting civilians onto flights.

Jake Sullivan, Biden's national security adviser. on Tuesday acknowledged reports that some civilians were encountering resistance — “being turned away or pushed back or even beaten” — as they tried to reach the Kabul airport.

The State Department said it was sending John Bass, a former ambassador to Afghanistan, to manage the evacuation operation in Kabul.

General Frank McKenzie, head of US Central Command and overall commander of US troops in Kabul, made an unannounced visit to the Afghan capital Tuesday.

In a written statement, he said he found that military air traffic controllers and ground handlers were “rapidly scaling up” airlift operations.

McKenzie on Sunday negotiated the safe passage agreement with Taliban leaders in talks held in Doha, Qatar. (With PTI Inputs)