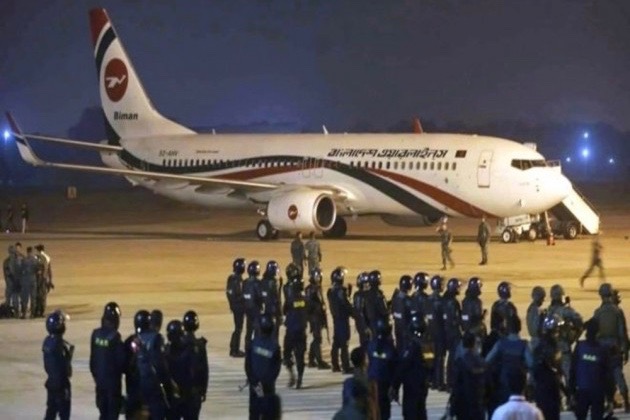 Bangladesh authorities have identified the hijacker of a Biman Bangladesh plane as Md Palash Ahmed, a criminal from Narayanganj’s Sonargaon.

The Rapid Action Battalion (RAB) said it had run a fingerprint match on the hijacker in the criminal database.

“Database records revealed the identity of the suspect as Md Palash Ahmed, a resident of Sonargaon area in Narayanganj. According to the passenger records of the flight, Palash booked a Dhaka-Chittagong flight on the plane,” an official was quoted as saying.

His seat number on the plane was 17A.

The hijacker died in the commando operation to rescue the passengers on Sunday night.

There were conflicting reports on whether the hijacker had a real gun with him or a toy gun.

He demanded to speak with his wife and Prime Minister Sheikh Hasina about an "issue" with his wife, officials said, bdnews24 reported.

He was identified later as a Dubai expatriate Bangladeshi named Majidul Haq Mahadi. He had come to Dhaka on November 20 last year and was a passenger on the Dubai-bound flight. He was in his mid 20s. His wife has not been identified yet.

According to media reports, the hijack drama unfolded some 20 minutes after take-off when the plane was flying at an altitude of 15,000 feet, when suddenly a man from the passengers' seat approached the cockpit, and hit a crew member, brandishing a pistol and a bomb like object.

“The gunman then said I want to hijack the plane. I have a pistol and a bomb. If you do not open the cockpit, I’ll blow up the plane,” the crew said.

The other crewmembers quickly sent a signal to the pilots in the cockpit about the hijack attempt. The pilots kept the cockpit door firmly locked, even as the gunman kept banging on it, demanding that it be opened, the Daily Star reported.

The pilots sent a message for emergency landing to the Shah Amanat International Airport in Chattogram.

Tension roiled when special forces surrounded the plane at the airport after it landed at 5:41pm, forcing the authorities there to stop all flights in and out of the airport.

After efforts to talk the suspect into giving up proved futile, army commandos stormed the plane,  ending the stand-off in an eight-minute operation.

By then, all 134 passengers and crew members had disembarked safely from the jetliner styled "Mayurpankhi".

“It was a swift operation. We didn’t even have the time to name the operation,”  Maj Gen Motiur Rahman said.

“The operation ended in eight minutes,” he said.

A probe committee is to be formed to find out how the incident occurred and of any negligence.

State Minister for Civil Aviation Ministry Md Mahbub Ali told a TV talk-show late on Sunday night that he had come to know that the hijacker was carrying a “toy gun”.

Commissioner of Chittagong Metropolitan Police Md Mahbubor Rahman said it was a “fake pistol”. Asked whether he saw it, the officer only said, “You can quote me on this. It's a fake pistol.”