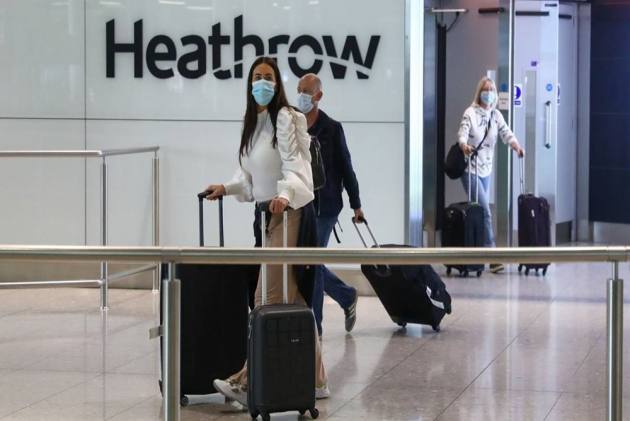 Amid the increasing Covid-19 cases in India, Britain's Heathrow Airport has refused to allow extra flights from India. On Friday, UK added India to the Covid-19 travel "red list", which imposes a ban on entry to the country for all except British or Irish residents.

The request for extra flights from airlines was turned down because of concerns about queues at passport control, the BBC reported on Thursday.

Four carriers had requested to operate an additional eight flights from India as travellers seek to fly before the new rule comes into effect. Currently, 30 flights a week are operating between the UK and India.

The airport said that it did not want to exacerbate existing pressures at the border by allowing more passengers to fly in, the report said.

The red list status, which is effective from 4 am local time on Friday, came amid a spike in coronavirus infections in India and also resulted in British Prime Minister Boris Johnson cancelling his planned visit to New Delhi on April 26.

British and Irish passport holders, and people with UK residence rights, will be allowed in but must quarantine in hotels for 10 days.

Last week, a director at the airport said the situation at the border - which is operated by the Home Office - had become "untenable" because of delays in processing arriving passengers.

The Civil Aviation Authority confirmed that it also received applications for charter flight permits from India to the UK - but these had been declined or withdrawn as they did not meet the qualifying criteria.

A government spokesperson said: "We are in a global health pandemic - people should not be travelling unless absolutely necessary."

"Every essential check helps avoid the risk of importing dangerous variants of coronavirus which could put our vaccine rollout at risk," the spokesperson said.

India's addition to the travel "red list" was announced in the House of Commons on Monday amid 103 cases recorded in the UK of a new variant of coronavirus first detected in India.

UK Health Secretary Matt Hancock told MPs that the decision had been made after studying the data and on a precautionary basis.

Since then, online travel agent Skyscanner said searches for flights returning to the UK from India had increased by more than 250 per cent.

The ban means that those with valid residency rights returning to the UK after the deadline on Friday face the additional financial burden of compulsory hotel quarantine and test costs, estimated at around 2,000 pounds per person.

A briefing document drawn up by officials at Public Health England shows that between March 25 and April 7, a total of 3,345 arrivals from India were registered in UK border travel data.