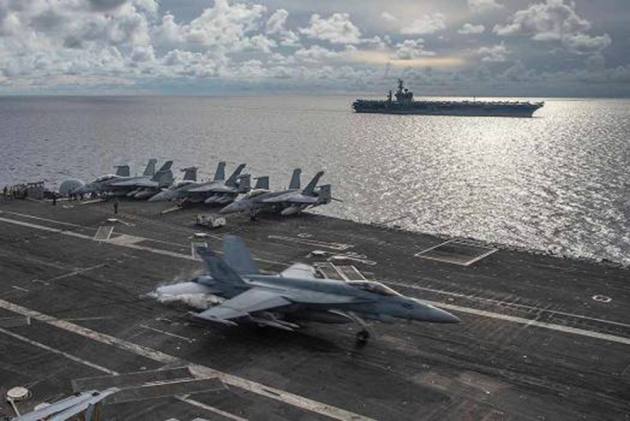 China claims almost all of the 1.3 million square mile South China Sea as its sovereign territory. China has been building military bases on artificial islands in the region. China has also impeded commercial activity like fishing or mineral exploration by countries like Vietnam and the Philippines.

On Tuesday, the Chinese People's Liberation Army (PLA) Southern Theatre Command said that the US destroyer USS John S McCain "trespassed into waters near China's Nansha Islands (Spratly Islands), without the authorisation of the Chinese government".

"The PLA Southern Theatre Command organised naval and aerial forces and expelled it (the US carrier)," Senior Colonel Tian Junli, a spokesperson for the southern command, said.
The US warship sailed through the sea just a day after China's second aircraft carrier - Shandong - entered the South China Sea for exercises, reported China Military Online – the official Chinese military website.

Commenting on the latest incident, the website quoted analysts as saying that the PLA has again demonstrated its control over the region and ability to safeguard national sovereignty and security.

The US action was a serious violation of China's sovereignty and security, and it gravely disrupted peace and stability in the South China Sea, which China is resolutely against, Tian said, stating that the command troops are on high alert at all times and will firmly carry out their duties and missions to safeguard national sovereignty and security as well as peace and stability in the region.

The US' "freedom of navigation" operations in the South China Sea have become routine since 2017, and by conducting a new one at this time, the Trump administration is using its last month to leave President-elect Joe Biden with more trouble in US-China relations, Chen Xiangmiao, an assistant research fellow at the National Institute for South China Sea Studies, told state-run Global Times on Tuesday.

The US conducted similar operations nine times so far in 2020, the most often in the past five years, according to South China Sea Strategic Situation Probing Initiative, a Beijing-based think tank.

Chen said that it remains uncertain if the US warship's trespassing is related to the Shandong's exercises, but it is unquestionable that the US warship came to provoke China.