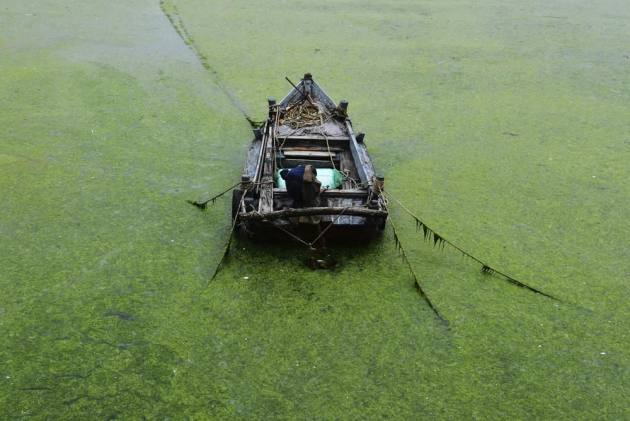 The northern Chinese port city of Qingdao has deployed thousands of boats and powered scoops to deal with a massive algae bloom that is threatening sea life, tourism and water transport.

The thick layer of plants that has coated waters and clogged beaches appeared last month and is reportedly the heaviest on record.

Such blooms can displace critical food sources for ocean animals while giving off a strong smell.

State media reported Thursday that the outbreak has spread over around 9,290 square kilometers (3,600 square miles).

The Xinhua News Agency said authorities have deployed about 7,300 vessels that have thus far collected 240,000 tons of algae.

Qingdao has seen such outbreaks for at least 15 years, but never on this level. Similar blooms have occurred in inland waterways such as Lake Tai to the south of Qingdao in Jiangsu province. Xinhua said a large patch of algae was first spotted drifting northward from the coast of Jiangsu in mid-May, blooming and thickening as it went.

Algae blooms can occur naturally, but are thought to be growing worse due to a rise in sea temperatures and the heavy use of chemical-based fertilizers. They are also appearing more widely, with outbreaks seen from California to the Suez Canal.