Rainwater has damaged more than 215,200 hectares of crops, causing a direct economic loss of about 1.22 billion yuan (about USD 188.6 million) 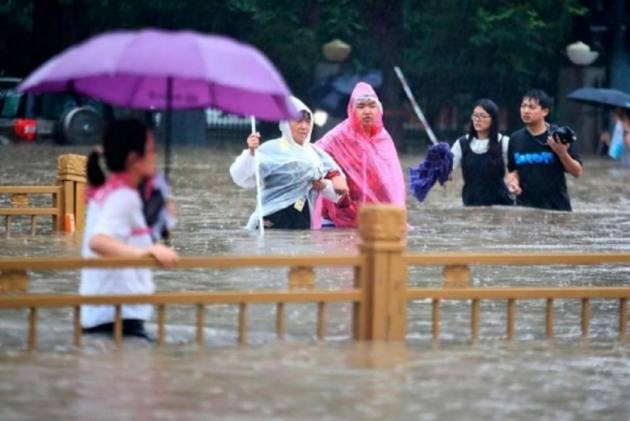 At least 33 people have so far been killed in flash floods in China, resulting from unprecedented rainfall. As per officials, eight persons continue to remain missing. The report came following news of death of thirteen workers who had been trapped in a flooded tunnel of a construction site since last week in China’s south Guangdong province have died.

The torrential rain has affected about three million people in Henan province and a total of 376,000 local residents have been relocated to safe places, the provincial emergency management department said. According to reports, this is the heaviest rainfall the country has seen in 1,000 years.

China Clears Decks To Build A Dam On The Brahmaputra In Tibet. Should India Be Worried?

The massive floods, described by meteorologists as a once-in-a-lifetime event, has resulted in apocalyptic scenes in Henan and its provincial capital Zhengzhou, a metropolis of 12.6 million, with its public avenues and subway tunnels getting submerged with surging waters.

China's People’s Liberation Army (PLA) blasted a damaged dam to divert the surging waters of a flooded river after the province received the heaviest rainfall in 1,000 years.

Twelve people were killed and five others injured when subway stations were hit by the floods. The victims died when their subway train was hit with rapidly rising floodwaters on Tuesday night. Two people were killed when a wall collapsed.

Videos posted on the Chinese social media showed petrified passengers trapped in subway trains clinging on to handlebars desperately waiting for help as floodwaters raised up to their necks.

Videos showed people trying to wade through floods in the downtown of the city while scores of cars and other vehicles washed away. Some videos also showed people falling into the massive cave-ins of the roads.

Rainwater poured into the subway tunnel of the city's Line Five, trapping an unknown number of passengers aboard a subway train.

Terming the flood situation as grim, President Xi Jinping ordered the deployment of the PLA and said authorities at all levels must give top priority to ensuring people's safety and property as massive floods ravaged the province and Zhengzhou city.

Xinhua quoted President Xi as saying that the rainfall has made the flood control situation very severe, causing massive waterlogging in Zhengzhou and other cities, water levels in some rivers exceeding the alarm levels, and damages to dams of some reservoirs.

He said that sections of railways have also been shut down, and some flights have been cancelled.

Henan is home to many cultural sites and a major base for industry and agriculture. Reports said Shaolin Temple, known for its Buddhist monks' mastery of martial arts, was also severely hit by the floods.

Heavy waterlogging has led to the virtual paralysis of the city's road traffic.

Over 80 bus lines have been suspended, more than 100 temporarily detoured and the subway service has also been temporarily suspended.

Police officers, firefighters and workers from the local sub-district have arrived at the site for the rescue operation, the report said.

The water level inside the subway carriage is receding, and the passengers are temporarily safe, it said.

More than 160 train services were stopped at Zhengzhoudong Railway Station. The airport in Zhengzhou cancelled 260 flights into and out of the city, and local railway authorities also halted or delayed some trains.

Affected by the rainstorms, several residential communities in the city are without tap water and electricity.

Hospitals also ran out of electricity, the Post reported.

The Zhengzhou flood control headquarters issued a text message on Wednesday, warning residents there was a grave safety hazard in the Guojiazui reservoir and calling on them to evacuate the southwestern part of the city immediately.