High-pressure tactics employed by China's ruling Communist Party appear to be finding success in separating Tibetans from their traditional Buddhist culture and the influence of the Dalai Lama. 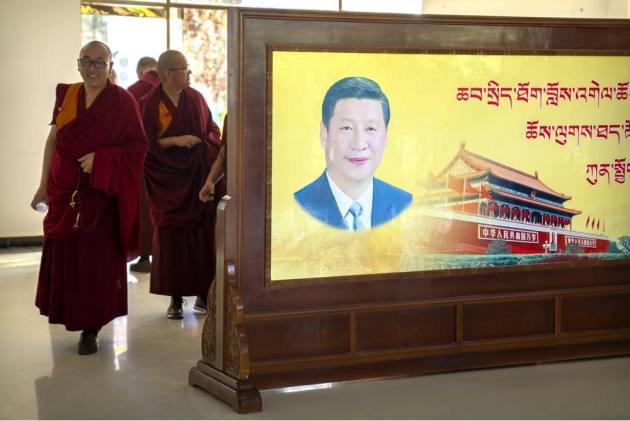 A brisk wind ruffles yellow prayer flags as dozens of Tibetans, some on crutches, circle a shrine in a time-honoured Buddhist ritual. Across the street, a red banner spells out a new belief system, one being enforced with increasing fervour, of China's ruling Communist Party.

“Xi Jinping's new socialist ideology with Chinese characteristics is the guide for the whole party and all nationalities to fight for the great rejuvenation of China,” the sign proclaims in Tibetan and Chinese script, referring to China's leader, who has sought to put his imprint on virtually every aspect of life across the vast county.

Lately, that has increasingly encompassed religion, both in central China and on its fringes, such as Tibet.

G-7 Summit 2021: US To Call Out China For Forced Labour Practices

The party is pressing a programme to Sinicise Tibetan life through programmes to separate Tibetans from their language, culture, and especially, their devotion to the Dalai Lama, Tibet's traditional spiritual leader who has lived in exile since 1959.

In the sun-drenched courtyard of the Jokhang Temple, one of the holiest sites in Tibetan Buddhism, the head monk Lhakpa said the Dalai Lama is not its spiritual leader.

The Associated Press joined a rare and strictly controlled media tour to Tibet highlighting what the government describes as the social stability and economic development of the region after 70 years of Communist Party rule.

That appears to reflect the party's confidence that it is prevailing in the global battle of public opinion over Tibet.

As a counterweight, Tibet rights groups continue to report frequent detentions, economic marginalisation, a suffocating security presence and heavy pressure to assimilate with China's Han majority while pledging loyalty to the Communist Party.

Tibetans in exile say they were effectively independent for centuries and accuse China of trying to wipe out Tibet's Buddhist culture and language while exploiting its natural resources and encouraging the Chinese to move there from other parts of the country.

Beijing says Tibet has long been a part of China and that the communists liberated hundreds of thousands of illiterate serfs when they overthrew the ruling theocracy in 1951.

Security has been tightened significantly since widespread anti-government protests in 2008, shortly before the Beijing Summer Olympics, accompanied by redoubled efforts at economic development and the declining influence of Buddhism.

In the model village of Baji east of Lhasa, the capital, residents dressed in traditional garments told foreign journalists how poverty alleviation campaigns had changed their lives.

“Time has changed, so people's demands have changed. People needed religious beliefs as their spiritual sustenance in old times, but now we don't," said Tsering Yudron, 25, an accountant.

The government points to the billions of dollars it has invested in roads, airports, railways, schools and hospitals, saying development has doubled life expectancy, brought electrification, jobs, and opportunities to a region that long lagged behind.

The impact on traditional culture has been stark. Like Christians and Muslims, Tibetan Buddhists have increasingly been pressured to “Sinicise” their religions under a programme put forth by Xi, China's most authoritarian leader since Mao Zedong.

While repression has been less harsh than in nearby Xinjiang, which has seen mass incarcerations of Turkic Muslims, residents are under extreme pressure to monitor each other and infractions can bring long prison sentences, rights groups say.

The party has evolved a system to control Tibetans through their faith, said Robert Barnett, a Tibet scholar at the School of Oriental and African Studies in London.

Especially since the 2008 protests, the government has sought to “get the love of the Communist Party into those Tibetan minds when they're children,” he said.

From campuses to homes, portraits of Xi now hang from the walls of homes and temples as once did images of the Dalai Lama.

“Tibetan Buddhism should be guided in adapting to the socialist society and should be developed in the Chinese context,” Xi said during a meeting in Beijing focused on Tibet.

China has increasingly vilified the Dalai Lama, who fled Tibet amid a failed uprising against Chinese rule in 1959, and has in recent years relinquished his political role as head of the self-proclaimed Tibetan government-in-exile.

Seeking to quell protests that pop up every decade or so, the party banned all images of the Dalai Lama in 1996, excised the exiled leader from books and broadcasts, and installed cadres in most villages, monasteries and nunneries.

While the Dalai Lama says he seeks only meaningful autonomy under Chinese rule, Beijing accuses him of supporting terrorism and seeking to split Tibet from China and has cut off all contacts with his representatives.

With the Dalai Lama soon to turn 86, attention has increasingly turned to the question of his succession, or reincarnation as traditional belief holds.

The successor is traditionally identified by senior monastic disciples, based on spiritual signs and visions.

But China says that only Beijing can appoint the next Dalai Lama in a ceremony using a golden urn to pick from among candidates approved by the central government. get to hear what he says.