Global Times, a state media tabloid's reported 'Words like ‘Karma’, ‘retribution’ and ‘deserving’ were frequently mentioned in Chinese netizens' comments when they saw the latest episode of the US' real version of The House of Cards. 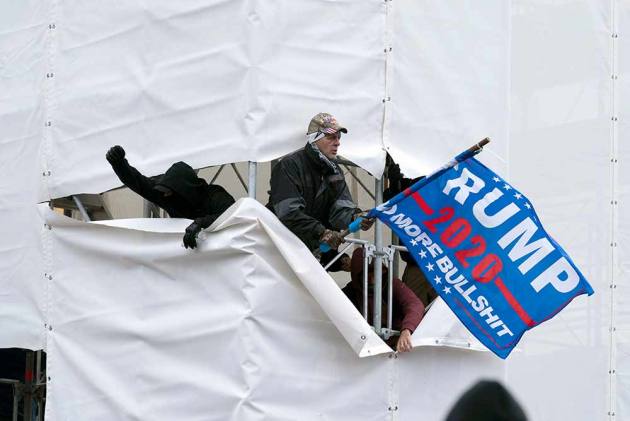 As US Capitol Hill submerged in a sea of Trump supporters laying siege in protest of his election defeat to Joe Biden, China drew comparisons between the siege of Capitol Hill and the time pro-democracy protesters stormed the Hong Kong legislature building in 2019.

China questioned the contrasting reactions by the international community and the media, while the Chinese netizens cheered the incident in America with words like "Karma", "retribution" and "deserving".

"We have noted what has taken place in the US and we believe that the American people hope for a return to normal order as soon as possible," Foreign Ministry spokesperson Hua Chunying said at a media briefing here while responding to questions seeking China’s response to the Capitol riots and Chinese social media reactions applauding the unprecedented violence.

"Many Chinese netizens are wondering why some politicians and media in the US reacted so differently to a similar situation," Hua said, drawing a comparison between the Capitol Hill riots and the attack on the Legislative Council building in Hong Kong by pro-democracy protesters in 2019.

"Words like ‘Karma’, ‘retribution’ and ‘deserving’ were frequently mentioned in Chinese netizens' comments when they saw the latest episode of the US' real version of The House of Cards,” said a report in the ruling Chinese Communist Party’s English tabloid, the Global Times.

Its nationalist editor, Hu Xijin, even predicted the likelihood of the collapse of the US political system.

"Some may say that the US is not Ukraine and it is capable of rapidly re-establishing all citizens' constitutional loyalty. They overestimate the power of the US political system. There is no doubt that the US system is degrading and showing signs of worsening as cancer,” he said in a write-up.

"However, instead of condemning the violence, US politicians hailed the ‘courage’ of these mobs, Western media praised the ‘restraint’ of the rioters, and House Speaker Nancy Pelosi even called it a ‘beautiful sight to behold’," it said.

Foreign Ministry spokesperson Hua said the radical protesters in Hong Kong violently stormed the Legislative Council building, caused damage and attacked the police, who remained highly restrained and professional, and not a single protester was killed.

"Although events in the US Capitol were not as violent as in Hong Kong, four lives were still lost,” she said.

"What words did they use about Hong Kong? What words are they using now?" she asked.

The mainstream media in the US are condemning the incident, using words like 'violence,' 'thugs,' 'extremists,' and 'disgrace.' What words did they use to describe HK? 'Beautiful sight to behold,' and 'fighters of democracy'," she said.

Since the radicals’ assault on the Hong Kong Legislative Council, China has passed its national security law for Hong Kong and took over the full control of the former British colony, disregarding the global protests and arrested scores of pro-democracy protesters.

"This contrast in rhetoric as well as the reasons for it are thought-provoking and deserve serious and profound reflection," Hua said.

"We believe that Americans also want security and tranquillity, especially in the context of the new pandemic, and we also hope that they could enjoy peace, stability and security as soon as possible," she said.

She also said the Chinese media personnel covering the riots were attacked. "Luckily, they are safe. I hope that country journalists’ security can be protected,” she said.