US: Connecticut Aquarium To Auction Off Chance To Name Three Beluga Whales 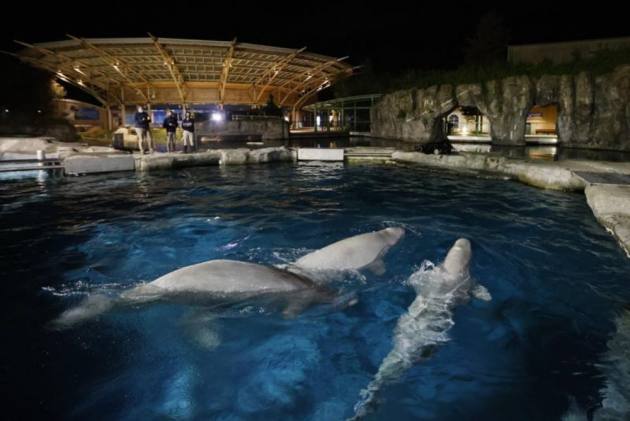 A Connecticut aquarium plans to auction off the chance to name three of its five recently arrived beluga whales to raise money for their care and to offset the cost of transporting them from Canada.

President and CEO Stephen Coan said the Sea Research Foundation has teamed with the New York-based auction house Guernsey's to hold a fundraising auction on August 19 at the Mystic Aquarium, which it operates.

“The three whales will get what we refer to as stage names, and they would be referred to by those names going forward,” he said.

Mumbai to Get a World Class Aquarium

“We've named other animals in the past and people get very excited about the opportunity. It really makes the animals part of the community and the community feels they are part of the experience of welcoming the new animals.”

The aquarium hopes to raise USD 4 million at the auction, which will also include donated art, perhaps a boat or vintage car and some unique experiences — such as educational dive trips with scientists to places such as the undersea Northeast Canyons and Seamounts Marine National Monument in the Atlantic Ocean, Coan said.

It will cost the aquarium about USD 5 million a year to care for the belugas, he said. That includes about USD 250,000 a year to pay for food and veterinary care for each animal, as well as costs associated with running the habitat and research.

Mystic Aquarium, which specializes in beluga research, spent months securing the needed approvals from both nations and overcoming challenges from some animal rights groups, which had opposed the move.

The auction announcement comes the same day the whales were fully integrated into the main part of the aquarium's 750,000-gallon beluga habitat with its three existing whales — Kela, Juno and Natasha.

Coan said all of the whales are acclimating well and in excellent health, though one did need to be treated for a preexisting gastrointestinal issue.

Juno has been communicating with them for the past five weeks through the barrier that kept them separated and has been very welcoming, Coan said.

Natasha seemed to be oblivious to the new arrivals and was a bit startled by the integration and Kelo seemed “a little bit aggrieved at first” to be sharing her space.

“They are getting to know each other now, so it's quite a sight,” he said.

The new arrivals will soon begin training through positive reinforcement — a fish, a tongue rub or a fun toy to play with — to voluntarily assist in research. They will be used as a baseline to compare against wild belugas in studying things like their health and immune systems.

Coan said there are guidelines on what the aquarium will allow the whales to be named. Corporate or offensive names, for example, are off limits.

The other two whales will get their names from the general public through contests the aquarium plans to run starting in August, including one that will be part of an educational program for schoolchildren in the state, Coan said.